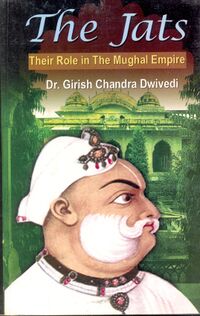 Though many erudite scholars like Prof. Jadunath Sarkar, Prof. Kalika Ranjan Qanungo, Prof. Satish Chandra, Prof. Irfan Habib have written extensively on the history of the Jats, there is a feeling that there are many gaps in these studies that come in the way of truly appraising the contributions of the Jats to the emergence of national ethos. The contribution of Dr. G.C. Dwivedi in this respect is outstanding.

A detailed description of the various phases of the Jat rebellion is offered by Sh. Girish Chandra Dwivedi in this book. After thirteen years of its first publication in 1989, the Surajmal Memorial Education Society has updated this work in year 2003 edited by Dr Vir Singh.

For an in depth understanding of the history of the Mughal Empire an intensive study of different indigenous powers is essential. The role of powers viz the Marathas and the Rajputs has received careful study from historians. But no serious studies have been undertaken in the case of the Jats of this period.

This study shows that in the Post-Aurangzeb period, the powerful elements at the court found it expedient to conciliate the Jats in order to retain power and to rejuvenate the declining Empire. As the most powerful Indian potentate, Jat Maharaja Suraj Mal occupied a key-position in the evolution of contemporary affairs in the Post-Panipat period. This constitutes a fascinating phase in the annals of the medieval India.

The author, Dr. G.C. Dwivedi has high-lighted the historic role of the Jats in the history of this period. He has assembled some of the rarest evidence available,especially the unpublished Persian manuscripts preserved in the British Museum, London, which the author has telescoped into a knowledgeable and inspiringly readable historical analysis. Perhaps he the second historian after Kanungo,who has spiritedly come out vindicatind the position of the Jats.

In the present corrected and updated edition twenty annotations have been added for clarifying and describing certain facts, names and places based on recent findings.

Dr Girish Chandra Dwivedi has cleared the controversies about the paternity and death of Maharaja Suraj Mal created by some biased historians.

Late Professor Girish Chandra Dwivedi born on 24th December 1938, did his Post Graduation from Department of Medieval Modern History, University of Allahabad. He completed his Ph.D. under the supervision of Late Prof. Ishwari Prasad, from Agra University. He was appointed as Lecturer in Kashi Vidyapeeth, Varansi, in 1962.

Professor Dwivedi died on 27th May 1979 as Professor and Head of Department of History and Dean of Students Welfare Kashi Vidyapeeth. Dr. Dwivedi’s research articles have been published in several Journals.Of special interest is his research paper published in Journal of Indian History, 1970, p.377 ff.