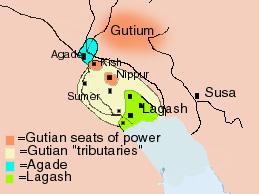 Gutian or Gutium was a tribe that overran southern Mesopotamia when the Akkadian empire collapsed ca. 2083 BC. Sumerian sources portray them as a barbarous, ravenous people from the mountains.[1]

The Sumerian king list represents them as ruling over Sumer for a time, and paints a picture of chaos within the Gutian administration.[2]

The Sumerian ruler Utu-hengal is credited with defeating the Gutian ruler Tirigan and removing the Guti from the country (ca. 2050 BC ).[3]

Next to nothing is known about the group or their origins, as no "Gutian" artifacts have surfaced from that time; all we have are the tribe's name and a list of rulers from contemporary sources.[4]

By the first millennium BC, the term "Gutium" was used to refer to all tribes east of the Tigris who had hostile relations with the peoples of lowland Mesopotamia.[5]

The author Samar Abbas of the article The glorious Gutians [6] says that there are proofs of Jat-Gutian linkages. Just as Kurdish scholars and historians proudly document their descent from the ancient Gutians, so Jat scholars take pride in their prestigious connection with the heroic Gutians. Thus, eminent Jat historian Dahiya notes the relations between the Jats and the Gutians:

" We may mention that there is evidence to show that the Mauryas were from the ancient Maṇda empire. Much earlier, we find them named as Muru or Mor by the Egyptians and the scriptures. There, these Mores were called Amuru and Amor or Amorites. CAH mentions that the initial vowel, 'a', is added to make pronunciation easier for the Semites, (vol.III, p.194). Thus, the initial vowel 'a' has to be ignored in order to find the correct name of these people and this clearly remains as Mur/Mor. This is the same as the Moor of Europe and the Mor clan of the Jats in India. When they attacked the king of the 11th dynasty of Egypt, they are expressly mentioned as the people from "the land of Djati." We have shown that this land of Djati is the same as the land of the Guti and clearly means the land of the Jats. Thus the { p.132 } Mor/Mur are expressly mentioned as the Jats in the 21st century BC. Naturally, when these people and their brothers from other areas in Central Asia came to India and established the Maurian empire, they did not feel at home and have been called a hot house in India as mentioned above." (Dehiya 1979, p.131-2)

The famed Jat scholar then continues,

"The Chinese were right in stating that the Hiung-nu were a part of the Yue-Che (reads as Guti ) people, and these Guti people had two divisions, the Ta-Yue-Che and the Siao-Yue-Che, exactly corresponding to the Massagetae and Thyssagetae of Herodotus (a classical Greek writer of fifth century BC), meaning the "Great-Jats" and the "Little-Jats" respectively. Almost every tribe of ancient Middle East (West Asia) and Central Asia, is represented among the present day Jats in India." (Dahiya 1980, p.23ff, cited in Dhillon 1994, p.10)

Hewitt also notes the connection between Jats and Goths:

"The Jats ... trace their descent to the land of Ghazni and Kandahar, watered by the mother-river of the Kushika race, the sacred Haetuman or Helmand. Their name connects them with the Getae of Thrace, and thence with the Gattons, said by Pytheas to live on the southern shores of the Baltic, the Gaettones placed by Ptolemy and Tacitus on the Vistula in the country of the Lithuanians, and the Goths of Gothland = Sweden. This Scandinavian descent is confirmed by their system of land-tenure, for the chief tenure of the Muttra district is that called Bhagadura, in which the members of the village brotherhood each hold as their family property a separate and defined area among the village lands, according to the customs of the Bratovos of the Balkan peninsula and the Hof-bauers of North-West [7] Germany .. The Getae of the Balkans are said by Herod to be the bravest and most just of the Thracians." [8]

The author Samar Abbas of the article The glorious Gutians [9] says that so self-evident are the connections between the Goths and Gutians that the very person who discovered the existence of the Gutian Dynasty, Prof. Scheil, noted this remarkable fact:

"This national or tribal name of Guti, the name of "The Guti Troops (who) carried off the royalty" of the Mesopotamian empire by their conquest of Erech the imperial capital about 2495 BC, was recognized as obviously suggesting 'Goths' by Prof. Scheil, when he announced in 1911 his discovery of the Guti Dynasty in Mesopotamia, and at the same time remarked that "nothing yet proves that they were the ancestors of the Goths. (Academie des Inscript. et Belles Lettres, Comptes Rendus, Paris, , 1911, p.327)" (Waddell 1929, p.358)

The learned Prof. Oppert has also identified the Gutians with the Goths:

"While Prof. Hilprecht has classed them with the Semites, Oppert has suggested, not without some show of reason, that the name "Guti' has an Aryan sound, like Gothi, the Goths, and therefore that the tribe itself may have been of this blood. * [ * ftn. Revue Archaeologique, 1893, p.363] (Brinton 1895, p.94)

Prof. Waddell agrees, and furthermore, identifies the Gutians as members of the dolichocephalic Nordic race:

"The 'Sumerian' ruling people were of the same racial physical type, with the same culture, traditions, religion, writing and language as the Early Aryans, who were of the Aryan, Gothic or Nordic race, and they were identical with the leading stock of the latter. And (p.468) the Early Sumerian kings sometimes called themselves in their monuments in Mesopotamia and in their Indus Colony Gut or Got; whilst one of the leading Sumerian dynasties in Mesopotamia called themselves Guti, Goti or "Goths"." (Waddell 1929, p.467-468)

When one considers that the Iranians are often classed together with Nordics into the "Nordic-Iranian" racial grouping, it becomes clear that the Gutians were of Nordic-Iranian affinities.

Hukum Singh Panwar (Pauria)[10] writes... Just see the remarkable parallels between the functioning of the Germans and the Indian Jat tribal "Khaap" and "Sarvakhaap" panchayats. This further reminds us of the Vedic republican communities (the Panchajatah or Panchajna), who are, as we shall have occasion to show in the next chapter, considered by us as the common ancestors of the Indian Jats and the German Goths or Gots.

Before concluding, we may go into the question of identity of the Teutons and the Swedes. The Teutons were Aryans including High and low Germans and Scandanavians, and to be more specific Goths (Gots, Getae, Jats, Juts), Lombards (Lampaka or Lamba), Normans, Franks (Vrkas, Saxons (Sacae Getae) and Angles[11] The Suevis (Sivis) including the Vilka (Virkas), the Manns (Mans) the Schillers (Chhilller) (Within brackets I gave the Indian names of the tribes.) etc. who, as we shall note (infra), migrated from the Sapta Sindhu to the Scandanavian countries in ancient times, were known as

Svi Thjoth or Sui or (Suiones) Joth[12], (Sivi or Sibi Jat), in archaic Norse, and ultimately as the Swedes. Mr. B.S.Dahiya[13] has assiduously pin-pointed nearly 250 European communities whose names are identified by him with the surnames (gotras) of the Indian Jats. The Sivis were probably earliest migrants as leaders of these tribes. It is these tribes whose anthropological details are given above. In the light of the aforesaid evidence we can reasonably assert that the physical characteristics of the Sivisa (Suevis) and their descendents (the victims of Dasarajna wars, who managed, by hook or by crook, to remain in the Harappan region, cannot be different from those of ones who perforce left the country for good or were deported to their new home in the Scandanavian countries[14].