Guran (गुरन)[1] Gurain (गुराइण) is a gotra of Jats found in Rajasthan and Haryana. They were supporters of Tomar Confederacy. [2] 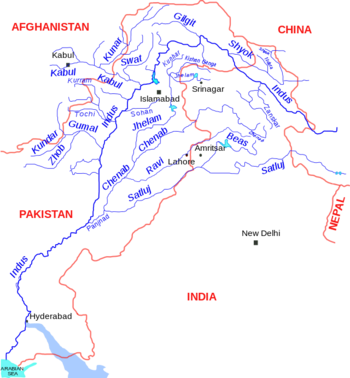 Indus and its tributaries

Guraeans were ancient people, living with Ashvakas, in the north-west of the Punjab, subjugated by Alexander in 327 BC as mentioned by Arrian[3] Guraeus River was named after them and was tributary of Kabul River. Guraeans may be the ancestors of Guran people.

Guraeans were ancient people, living in the north-west of the Punjab, subjugated by Alexander in 327 BC as mentioned by Arrian[4]

Arrian[5] writes.... that Alexander advanced into the land of the Aspasians, Guraeans and Assacenians. These were tribes living in the north-west of the Punjab. Marching by a mountainous and rough road along the river called Choes, Probably the modern Kama, a tributary of the Cabul. He assaulted their cities which were situated on his route. He was himself wounded by a dart which penetrated through the breastplate into his shoulder. A sharp contest ensued; but Alexander won the battle.... Alexander then marched against the Assacenians, Passing through the land of the Guraeans, he crossed the river Guraeus, which gives its name to the land, with difficulty. Guraeus River is a tributary of the Cophen (Kabul River), probably what is now called the Lundye, running parallel with the Kama. When these people perceived Alexander approaching, they durst not take their stand for a battle in close array, but dispersed one by one to their various cities with the determination of preserving these by resolute fighting.

Ch.23:Battles (of Alexander) with the Aspasians

Arrian[6] writes....Alexander now took command of the shield-bearing guards, the Companion cavalry with the exception of those who had been joined with Hephaestion's division, the regiments of what were called foot-Companions, the archers, the Agrianians and the horse-lancers, and advanced with them into the land of the Aspasians, Guraeans and Assacenians.[1] Marching by a mountainous and rough road along the river called Choes,[2] which he crossed with difficulty, he ordered the main body of his infantry to follow at leisure; while he himself took all the cavalry, and 800 of the Macedonian infantry whom he mounted upon horses with their infantry shields, and made a forced march, because he had received information that the barbarians who inhabited that district had fled for safety into the mountains which extend through the land and into as many of their cities as were strong enough to resist attack. Assaulting the first of these cities which was situated on his route, he routed, at the first attack without any delay, the men whom he found drawn up in front of the city, and shut them up in it. He was himself wounded by a dart which penetrated through the breastplate into his shoulder; but the wound was only a slight one, for the breastplate prevented the dart from penetrating right through his shoulder. Leonnatus and Ptolemy, son of Lagus, were also wounded. Then he encamped near the city at the place where the wall seemed most easy to assault. At dawn on the following day the Macedonians easily forced their way through the first wall, as it had tiot been strongly built. The city had been surrounded with a double wall. At the second wall the barbarians stood their ground for a short time; but when the scaling ladders were now being fixed, and the defenders were being wounded with darts from all sides, they no longer stayed; but rushed through the gates out of the city towards the mountains. Some of them were killed in the flight and the Macedonians, being enraged because they had wounded Alexander, slew all whom they took prisoners. Most of them, however, escaped into the mountains, because they were not far from the city. Having levelled this city with the ground, he marched to another, named Audaca, which he got possession of by capitulation. He left Craterus there with the other commanders of the infantry to capture all the remaining cities which would not yield of their own accord, and to set the affairs of the whole country in such order as he should find most convenient under the circumstances.

1. These were tribes living in the north-west of the Punjab.

2. Probably the modern Kama, a tributary of the Cabul.

Arrian[7] writes.... When the enemy who were occupying the commanding heights perceived the Macedonians approaching, they descended into the plain, being emboldened by their superiority in number and despising the Macedonians, because they were seen to be few. A sharp contest ensued; but Alexander won the victory with ease. Ptolemy's men did not range themselves on the level ground, for the barbarians were occupying a hill. Wherefore Ptolemy, forming his battalions into column, led them to the point where the hill seemed most easily assailable, not surrounding it entirely, but leaving room for the barbarians to flee if they were inclined to do so. A sharp contest also ensued with these men, both from the difficult nature of the ground, and because the Indians are not like the other barbarians of this district. but are far stronger than their neighbours. These men also were driven away from the mountain by the Macedonians. In the same way did Leonnatus with the third division of the army; for his men also defeated those opposed to them. Ptolemy indeed says that all the men were captured, to a number exceeding 40,000, and that 230,000 oxen were also taken, of which Alexander picked out the finest, because they seemed to him to excel both in beauty and size, wishing to send them into Macedonia to till the soil. Thence he marched towards the land of the Assacenians; for he received news that these people had made preparations to fight him, having 20,000 cavalry, more than 30,000 infantry, and 30 elephants. When Craterus had thoroughly fortified the city, for the founding of which he had been left behind, he brought the heavier armed men of his army for Alexander as well as the military engines, in case it might be necessary to lay siege to any place. Alexander then marched against the Assacenians at the head of the Companion cavalry, the horse-archers, the brigades of Coenus and Polysperchon, the Agrianians, the light-armed troops,[1] and the archers. Passing through the land of the Guraeans, he crossed the river Guraeus,[2] which gives its name to the land, with difficulty, both on account of its depth, and because its current is swift, and the stones in the river being round caused those who stepped upon them to stumble.[3] When the barbarians perceived Alexander approaching, they durst not take their stand for a battle in close array, but dispersed one by one to their various cities with the determination of preserving these by resolute fighting.

2. A tributary of the Cophen, probably what is now called the Lundye, running parallel with the Kama.