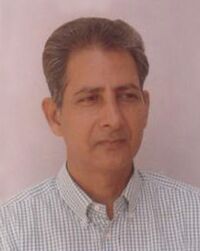 Jai Paul Singh Dahiya is a retired IAS officer of Haryana cadre. He was born in March 1948 in Munda Majra village of Jagadhri Tahsil, Yamuna Nagar District of Haryana.

He got married to Neelam, daughter of CH. Sarup Singh of Khanda Kheri.

During his long stint of government service, starting in May, 1972 in The Haryana Civil Services (E.B.) and Allied Services as Tahsildar and to retirement as IAS officer of Haryana cadre in March, 2008, he has held many important assignments and served with distinction to prove his administrative skills in the service of the people and the state. In the beginning, he served as Tahsildar Kaithal, Narnaul, Panipat and as District Revenue Officer-cum-Land Acquisition Collector,Karnal. After his promotion to HCS, he served as Special Collector, District Development and Panchayat Officer, GM.Haryana Roadways, at various stations in Haryana. During the course of his service career, he has held prestigious assignments in the cooperative sector of the State of Haryana, namely :- The Managing Director of the Co-op.Sugar Mills of Karnal, Sonipat and Kaithal. He served as SDM Thanesar(Kurukshetra), Safidon, Sirsa and Ellenabad. He was assigned the Key-posting of Add.Deputy Commissioner-cum-CEO. DRDA and Add.District Magistrate and he served as such in the of Districts of Kaithal, Bhiwani and Panipat.

Two poetry books in Hindi devnagri script, titled "Gul-O-Khar" and "Aabshar" with pen-name 'Shadaab'. The reading of these poetry books makes it clear that the poet 'Shadaab' is closely connected to the soil of Haryana, its rich cultural heritage and social milieu.

His third book entitled : "Shadaab Dohavli" is under publication and is likely to hit the book stands soon.

He served as Ombudsman, NREGA, in Yamuna Nagar District for a short period. These days he is busy with his ancestral profession of agriculture, his literary and academic pursuits.

Back to The Administrators