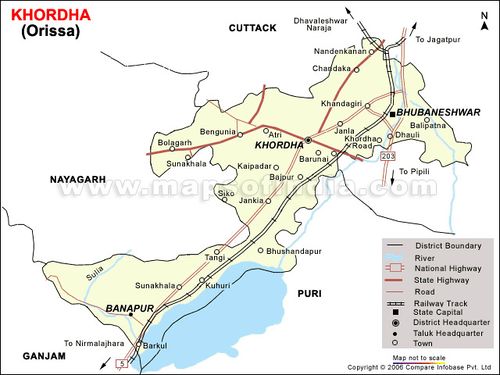 Jatani or Jatni (Oriya:ଜଟଣୀ, Hindi:जटणी) or Khurda Road is a city and a municipality in Khordha district in the Indian state of Orissa. It is close to Bhubaneswar, the capital city of Orissa. Jatni town is also known as Khurda road in railways.... it is a famous railway junction........

Khurda-Road is the railway junction and gateway to the vast tribal hinterland. It has developed as a commercial hub with a number of educational and other institutions.

The population of Jatani consists mostly of Oriya & Telugu speaking peoples. Others like Muslim, Marwari, Gujrati, Bengali are also present in good numbers. Good number of Temples, Masjid & Churches are present here. It is also the home of highest number of Anglo-Indian people in Orissa. A variety of communities live here because Jatani has been a very important railway station since the British rule. A major chunk of people living here are railway employees.

Jatani is famous for its celebration of the Ganesh Chaturthi festival. Jatani is very crowded during Ganesh Puja as people from nearby places visit in huge numbers for the occasion. People of Jatani maintain communal harmony. Eid ul-Fitr & Christmas Day are also celebrated fervently here.

It has excellent rail linkages with most major cities in the country. Jatani Railway Station is known as Khurda Road, it is the biggest Railway Junction in the state.

It is well connected to all other cities in the state. The NH-5 National Highway(connecting Chennai & Kolkata) runs close to Jatani (around 7 km).The state capital Bhubaneswar is 25 km from here by road.

The nearest Airport is at Bhubaneswar, which is 25 km from here.

There are very good and old temples in around Jatani. Among old temples are Budhapada (Lord Shiva). This is a very old temple and devotees from different places in and around of Jatni visit the temple. Other temples are Chotta Somnath Mandira situated at Kudiary, God Venkateswara Temple, and Maa Damunei or Uttarayani Temple, Maa Mangala and Taleshwar(God Shiva) situated at Barapada. Dola Jatra is celebrated in Harirajpur (4 km away from Jatni town), which takes place on the 5th day following Holi. It is a very big local gathering where idols of gods from different parts of the district are brought in palaki (palaquin) and placed in jatra(fair). People visit and offer their prayers to gods by applying different colours of Holi. Ganesh puja is the biggest festival for jatni in which more than 3 lakhs people come during the festival to watch the pandels and enjoy the evening in mina bazar with games and end their day with watch odiya opera known as jatra party.The Most important historical place near jatni is barunei hill.at the British times all the khurdha paiks started there movement from here.

Back to Jat Kingdoms in Ancient India