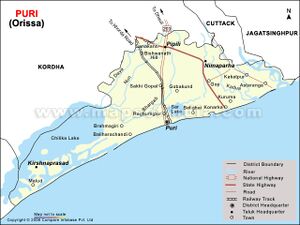 Puri (Hindi:पुरी, Odia:ପୁରୀ ) is a city in the east Indian state of Orissa. The city is famous for its Jagannath temple. The temple was built in the late eleventh century. Puri is one of the oldest cities in the eastern part of the country. According to Alexander Cunningham[1] Xuanzang visited and has mentioned it as a town named Che-li-ta-lo-ching or Charitrapura (चरित्रपुर) in 639 AD.

It is situated on the coast of the Bay of Bengal and is a popular beach resort, positioned in a unique place so that both sunset and sunrise can be viewed from the beach. Located at 19.8|N|85.85|E|.[2] It has an average elevation of 0. 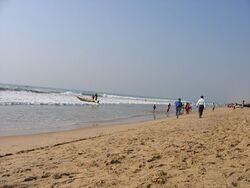 It is the only shrine in India, where Goddess Radha also referred to as Durga, Sati, Parvati, Shakti lives here with Lord Krishna who is Jagannatha.

Puri is the site of the Govardhana matha, one of the four cardinal institutions established by Sri Adi Shankara Charya, the others being those at Sringeri, Dwarka and Jyotirmath.

Puri is also famous for its annual Ratha Yatra, or "Festival of Chariots", when the deities Jagannath, Baladeva, and Subhadra, are brought out of the temple, and placed in a chariot procession. This festival occurs on various dates of the Gregorian calendar, typically in the month of July.

The town is famous for its many Mathas (monasteries of the various Hindu sects). It also houses the relics of many Hindu Saints as traditionally it is seen as a holy place to die in or to be cremated. As a result, it has had a disproportionate number of widows. Like other old Hindu religious towns it has a lot of character that is difficult to be glimpsed or picked up on easily by a casual visitor.

Puri is well connected by road through National Highway No.203 starting from Rasulgarh of Bhubaneswar (Orissa State, Capital)and by Indian Railway which runs mail and express trains. The nearest airport is at about 57 km. from Bhubaneswar.

Gateway to famous Sun temple (from Puri 36 km.) at Konark from Konark towards north "Kurma" is the location of a famous Buddhist place. It is possible to walk along the beach from Puri all the way to Konark (or Konarak the name it is also known by) in order to see the Konarak Sun Temple.

Alexander Cunningham[6] writes that The kingdom of U-cha. or Oda, corresponds exactly with the modern province of Odra, or Orissa. By a reference to the ' Biography of Hiouen Thsang,'[7] it would appear that the capital of Odra was 700 li to the south-west of Tamralipti, and as this bearing and distance agree with the position of Jajipura, I think that the pilgrim must have returned to Tamluk from Kirana Suvarna before proceeding to Odra. In the travels of the pilgrim[8] the bearing and distance are taken from Kirana Suvarna; but this is perhaps a mistake, as they are usually referred to the capital, which, whether we place it at Jajipur or at Katak, is due south of Kirana Suvarna.

The province was 7000 li, or 1167 miles, in circuit, and was bounded by the great sea on the south-east, where there was a famous seaport town named Che-li-ta-lo-ching, or Charitrapura, that is, the " town of embarkation " or " departure." This was probably the present town of Puri, or "the city," near which stands the famous temple of Jagannath. Outside the town there were five contiguous stupas with towers and pavilions of great height. I presume that it is one of these which is now dedicated to Jagannath. The three shapeless figures of this god and his brother and sister, Baladeva and Subhadra, are simple copies of the symbolical figures of the Buddhist triad, Buddha,

[p.511]: Dharma, and Sangha, of which the second is always represented as a female. The Buddhist origin of the Jagannath figures is proved beyond all doubt by their adoption as the representative of the Brahmanical Avatar of Buddha in the annual almanacs of Mathura and Banaras.

Puri has a very long, broad sand beach. The sea produces very big waves here. It attracts many national and international tourists because of its beautiful long beach and world famous Jagannath Temple. The place to start a pilgrimage is here and Puri is a pilgrim's destination too. There are many ashrams and sacred temples in Puri.

A Tak kingdom is mentioned by Hiuen-Tsang (631-643 A.D.) It is mentioned as situated towards east of Gandhara. Hiuen-Tasng Gives its name as Tekka, and the History of Sindh, ChachNama, mentions it as Tak. Its capital was Shekilo (Sakala, modern Sialkot) and formerly King Mihiragula was ruling from this place. In seventh century A.D. Its people were not preeminently Buddhists, but worshiped the sun, too. Abhidhana Chintamani Says that Takka is the name of Vahika country (Punjab). For what follows, we are indebted to Chandrashekhar Gupta for his article on Indian coins. [9] The Tanks must have come to India, Prior to fourth century A.D. i.e. with the Kushana. And with the Kushanas, they must have spread up to Bengal and Orissa, like the Manns and Kangs who spread into southern Maharashtra and the Deccan. In Orissa, the Tanks, had their rule in Orissa proper, Mayurbhanj, Singbhoom, Ganjam, and Balasore Districts. They are called by historians as “ Puri Kushans” or Kushanas of Puri (Orissa). Their coins have been found at Bhanjakia and Balasore (Chhota Nagpur) and these coins have the legend Tanka written in Brahmi script of the fourth century A.D. Allan suggested the reading Tanka as the name of a tribe “ [10] and others generally accepted the reading Tanka as correct. [11] Allan placed them in the third or early fourth century A.D., while V.A. Smith placed them in the fourth or fifth century A.D. ; R.D. Bannerji called them “ Puri Kushanas” [12]