Ganjam (गंजम) is a town and a District in the state of Orissa, India.

Ganjam is known for its beaches bordering the Bay of Bengal, the most famous ones being Gopalpur (a famous tourist destination) and Dhavaleshwar. The most populous city in Ganjam, Berhampur, is famous for silver filigree and silk sarees woven with gold and silver threads. The district headquarters is Chhatrapur.

Ganjam is divided into three subdivisions Chhatrapur, Berhampur, and Bhanjanagar. 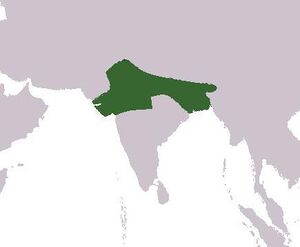 Harshavardhana (590–647 AD) (हर्षवर्धन), also Harsha, was a Buddhist Jat emperor who ruled Northern India for over forty years. He was the grandson of king Pushyamitra of Thanesar and son of Prabhakaravardhana. At the height of his power his kingdom spanned the Punjab, Bengal, Orissa and the entire Gangetic plain North of the Narmada River. He ruled from 606-647 AD.

After the downfall of the Gupta Empire in the middle of the sixth century C.E., North India reverted back to small republics and small monarchial states. Harsha united the small republics from Punjab to Central India, and they, at an assembly, crowned Harsha king in April 606 AD when he was merely 16 year old.

Harsha's empire was at its greatest extent in his times. Though quite a young man when he came to power, Harsha proved himself a great conqueror and an able administrator. After his accession, Harsha united the two kingdoms of Thanesar (Kurukshetra) and Kannauj and transferred his capital from Thanesar to Kannauj.

Harsha defeated Sasank, the ruler of Bengal. He also brought the Eastern Panjab (present day Haryana), Bengal, Bihar and Orissa under his control. He conquered Dhruvasena of Gujarat and married his daughter to him. He also conquered Ganjam, a part of the modern Orissa State.

(19° 22’ 29"N, 85° 49’ 03"E), Dist. Ganjam, Orissa, India. This fort is located 8 km from Chatrapur. Until the beginning of the 18th century this site was the main town and headquarters of the district. The fort had a customs house and a harbour. The Orissa State Archaeology restored the fort over the years. Visible are the star-shaped bastions and moat. The main structure seems to have been constructed by British architects.

A Tak kingdom is mentioned by Hiuen-Tsang (631-643 A.D.) It is mentioned as situated towards east of Gandhara. Hiuen-Tasng Gives its name as Tekka, and the History of Sindh, ChachNama, mentions it as Tak. Its capital was Shekilo (Sakala, modern Sialkot) and formerly King Mihiragula was ruling from this place. In seventh century A.D. Its people were not preeminently Buddhists, but worshiped the sun, too. Abhidhana Chintamani Says that Takka is the name of Vahika country (Punjab). For what follows, we are indebted to Chandrashekhar Gupta for his article on Indian coins. [3] The Tanks must have come to India, Prior to fourth century A.D. i.e. with the Kushana. And with the Kushanas, they must have spread up to Bengal and Orissa, like the Manns and Kangs who spread into southern Maharashtra and the Deccan. In Orissa, the Tanks, had their rule in Orissa proper, Mayurbhanj, Singhbhum, Ganjam, and Balasore Districts. They are called by historians as “ Puri Kushans” or Kushanas of Puri (Orissa). Their coins have been found at Bhanjakia and Balasore (Chhota Nagpur) and these coins have the legend Tanka written in Brahmi script of the fourth century A.D. Allan suggested the reading Tanka as the name of a tribe “ [4] and others generally accepted the reading Tanka as correct. [5] Allan placed them in the third or early fourth century A.D., while V.A. Smith placed them in the fourth or fifth century A.D. ; R.D. Bannerji called them “ Puri Kushanas” [6]

Alexander Cunningham[7] writes that From the capital of Odra the pilgrim Xuanzang proceeded to the south-west for 1200 li, or 200 miles, to Kong-yu-to[8] This name has not been identified; but M. Vivien de Saint-Martin has, I think, indicated its true position in the neighbourhood of the Chilka lake. The capital was situated near a bay, or "junction of two seas," which can only be intended for the great Chilka lake and the ocean, as there is no other great sheet of water along this surf-beaten coast. Ganjam itself must therefore be the old capital. But as Ganjam is only 130 miles from Jajipur in a direct line measured on the map, or about 150 miles by road, I conclude that the pilgrim must have visited the hills of Udayagiri and Khandagiri and the town of Charitrapura, or Puri, on his way to Ganjam. By this route the distance would be increased to 165 miles by direct measurement, or about 190 miles by road, which agrees with the estimate of the Chinese pilgrim.

The Chinese syllables Kong-yu-to are rendered by M. Julien as Konyodha ; but there is no place of this name that I am aware of. I observe that M. Pauthier[9] writes the name Kiuan-yu-mo, which would seem to be intended for a transcript of Ganjam, of which the derivation is unknown. Hamilton proposes ganjam, "the depot," but this term is never used alone, so far as I am aware, but always in combi-

[p.514]: nation, either with the founder's name or with the name of the principal article sold in the place, as Ram-ganj, or " Rama's market,"Thithar-ganj, the "brazier's market," etc. The district was only 1000 li, or 167 miles, in circuit, which shows that the territory was confined to the small valley of the Rasikulya river. But though the domain was small, the state would appear to have been of some consequence, as Hweng Thsang describes the soldiers as brave and bold, and their king as so powerful that the neigh-bouring states were subject to him, and no one could resist him. From this account I am led to infer that the king of Ganjam, at the time of Hwen Thsang's visit, must have been Lalitendra Kesari of the Orissa annals, who is said to have reigned for nearly sixty years, from A.D. 617 to 676. The pilgrim visited Ganjam in A.D. 639, when this prince was at the very height of his power. But only four years later, when the pilgrim revisited Magadha, he found the great King Harsha Varddhana of Kanoj[10], had just returned from a successful expedition against the king of Ganjam. The cause of the war is not stated, but as Harsha Varddhana was a staunch Buddhist, while Lalitendra was a devoted Brahmanist, the difference of religion would easily have furnished a sufficient pretext for war. It seems probable that Ganjam was then annexed to the dominions of the Kanoj king, and formed part of the province of Orissa.

Hwen Thsang notes that the written characters of Ganjam resembled those of central India, but that both the language and the pronunciation were different. This statement proves that the same alphabetical

[p.515]: characters were still in use over the greater part of India at as late a date as the middle of the seventh century. It also serves to show that the intercommunications of the Buddhist fraternities throughout India were not yet broken, although they must already have been much restricted by the steady progress of Brahmanism.