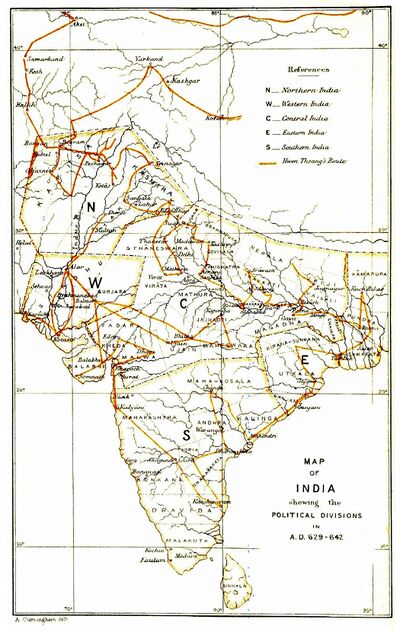 Xuan Zang or Xuanzang (c. 602 – 664), born Chen Hui or Chen Yi (Chen I), was a Chinese Buddhist monk, scholar, traveller, and translator who described the interaction between China and India in the early Tang dynasty.

Variants of his name

Born in what is now Henan province around 602, from boyhood he took to reading religious books, including the Chinese classics and the writings of ancient sages.

At length, he came to Chang'an, then under the peaceful rule of Emperor Taizong of Tang, Xuanzang developed the desire to visit India. He knew about Faxian's visit to India and, like him, was concerned about the incomplete and misinterpreted nature of the Buddhist texts that had reached China.

He became famous for his seventeen-year overland journey to India, which is recorded in detail in the classic Chinese text Great Tang Records on the Western Regions, which in turn provided the inspiration for the novel Journey to the West written by Wu Cheng'en during the Ming dynasty, around nine centuries after Xuanzang's death.[2]

Harihar Panda[3] writes ... The earliest Chinese writers (e.g. Chang-k'ien and his successors) employ the term Shentu and Hsien-tsu (Sindhu) which is soon replaced by T'ien Chu succeeded by Intu. During the period of Xuanzang and I-tsing such names as Si-fang (the west), Wu-tien (the five countries of India), A-ti-ya-t'i-sha (Aryadesha), Po-lo-menkuo or Fan-Kuo (Brahmarashtra) and Indra Vardhana were also other connotations of India.

Xuanzang was born Chen Hui (or Chen Yi) around 602 in Chenhe Village, Goushi Town, Luozhou (near present-day Luoyang, Henan) and died on 5 February 664[4] in Yuhua Palace (in present-day Tongchuan, Shaanxi). His family was noted for its erudition for generations, and Xuanzang was the youngest of four children. His ancestor was Chen Shi, a minister of the Eastern Han dynasty. His great-grandfather Chen Qin served as the prefect of Shangdang present-day Changzhi, Shanxi) during the Eastern Wei; his grandfather Chen Kang was a professor in the Taixue (Imperial Academy) during the Northern Qi. His father Chen Hui was a conservative Confucian who served as the magistrate of Jiangling County during the Sui dynasty, but later gave up office and withdrew into seclusion to escape the political turmoil that gripped China towards the end of the Sui. According to traditional biographies, Xuanzang displayed a superb intelligence and earnestness, amazing his father by his careful observance of the Confucian rituals at the age of eight. Along with his brothers and sister, he received an early education from his father, who instructed him in classical works on filial piety and several other canonical treatises of orthodox Confucianism.

Although his household was essentially Confucian, at a young age, Xuanzang expressed interest in becoming a Buddhist monk like one of his elder brothers. After the death of his father in 611, he lived with his older brother Chén Sù (later known as Zhǎng jié) for five years at Jingtu Monastery in Luoyang, supported by the Sui state. During this time he studied Mahayana as well as various early Buddhist schools, preferring the former.

In 618, the Sui Dynasty collapsed and Xuanzang and his brother fled to Chang'an, which had been proclaimed as the capital of the Tang dynasty, and thence southward to Chengdu, Sichuan. Here the two brothers spent two or three years in further study in the monastery of Kong Hui, including the Abhidharma-kośa Śāstra. When Xuanzang requested to take Buddhist orders at the age of thirteen, the abbot Zheng Shanguo made an exception in his case because of his precocious knowledge.

Xuanzang was fully ordained as a monk in 622, at the age of twenty. The myriad contradictions and discrepancies in the texts at that time prompted Xuanzang to decide to go to India and study in the cradle of Buddhism.

He subsequently left his brother and returned to Chang'an to study foreign languages and to continue his study of Buddhism. He began his mastery of Sanskrit in 626, and probably also studied Tocharian. During this time, Xuanzang also became interested in the metaphysical Yogacara school of Buddhism.

[p.568]: Sir Alexander Cunningham[17] writes that - The above chronology gives the approximate dates as nearly as can determine them, partly from the facts stated, and partly from his lengthened experience of travelling in India. The estimated dates are well supported by facts noted in the histories of Ceylon, Sindh, and Kashmir; but he here repeats, that on Hwen Thsang's arrival at Kanchi, in February, 640, he heard of the assassination of the King of Ceylon. This must have been Raja Buna Mugalan, who was put to death in A.D. 639.

Another proof of the general accuracy of estimate of the pilgrim's rate of travelling is afforded by his statement made to the Great Abbot of the Nalanda Monastery that his travels had occupied three years.1 This period must refer to the actual time spent in travelling, as his recorded halts at various places for the purpose of study, before he reached Nalanda, amount to four years and seven months. These halts, as stated in his life, are as follows : —

[p.569]: Adding to these recorded halts the three years said to have been spent in travellings the whole period elapsed, between the pilgrim's departure from Liang-cheu in August, 629, and the date of his conversation with the Great Abbot, is seven years and seven months, which fixes his arrival at Nalanda in February, 637 A.D., the date according to my estimate being 1st March, 637.

The chronology here detailed follows the route indicated in the Life of Hwen Thsang, which differs from that given in the Memoirs after the departure of the pilgrim from Maheswarapura in April, A.D. 641. According to the Memoirs, the route was as follows : —

By this route the pilgrim would have reached Tsaokiuto just two years and two months earlier than by the other route, and as the date of his return to China is fixed with certainty, this long period of upwards of two years is wholly unaccounted for in the record of the pilgrim's travels. It seems almost certain, therefore, that it must have been spent in revisiting Magadha, as stated in the ' Life.'

In the ' Life' it is recorded that at the end of his second visit to Magadha, after two years' study, the pilgrim had a dream, in which the Bodhisatwa Manju Sri appeared to him, and foretold the death of King Siladitya in ten years.1 The king's death is then noted to have taken place at the end of

[p.570]: the period Yong-hoei, or in A.D. 650. According to this date, the pilgrim's two years' residence in Magadha must have been from A.D. 638 to 640. But I find it quite impossible to reconcile this date with the detailed statements of his travels. If, however, we might refer the dream to the end of his first visit to Magadha, in November A.D. 638, which would seem to have also extended to about two years, then the date of Siladitya's death would be fixed to A.D. 648, which is the very year assigned for it in the Chinese account of India by Ma-twan-Lin.1 In the 22nd of the years Ching-kwan (A.D. 648), the Emperor of China sent an ambassador to Magadha, but before his arrival Siladitya was dead. The information obtained by this ambassador is, I think, more trustworthy than the account of Hoei-li, the biographer of Hwen Thsang, as the former had no object to serve in making an erroneous statement, while the latter was obliged to support the prophetic announcement of Hwen Thsang's dream. I am, therefore, inclined to adopt A.D. 648 as the true date of Siladitya's death, and to refer the period of the pilgrim's dream to the close of his first visit to Magadha in A.D. 638.

According to this view, the greater part of his two years' study at Nalanda must be referred to his first visit in A.D. 637-638, to which I have assigned a period of twenty-two months, which, added to his subsequent two months' study for the resolution of doubts2 at his second visit, makes up the total period of two years' study at Nalanda. The longer period of five years' study of all the works of both Buddhists and Brahmans, which is mentioned in another place,3 I understand to refer to the whole duration of his three principal halts, namely, at Kashmir for two years, at Chinapati for fourteen months, and at Nalanda for two years, which, taken in round numbers, amount to just five years.