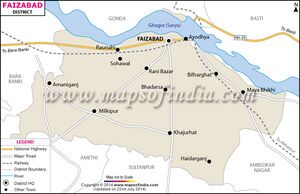 Saketa (साकेत) is an old name for the ancient city of Ayodhya,[1][2] an important Hindu religious place, the capital of Kosala and the birthplace of Lord Rama, the hero of epic Ramayana. Anjanavana was an ancient forest (deer park) near Saket (Ayodhya) where Gautam Buddha once stayed and preached.[3]

James Legge[4] writes that Going on from this to the south-east for three yojanas, they came to the great kingdom of Sha-che.1 As you go out of the city of Sha-che by the southern gate, on the east of the road (is the place) where Buddha, after he had chewed his willow branch,2 stuck it in the ground, when it forthwith grew up seven cubits, (at which height it remained) neither increasing nor diminishing. The Brahmans with their contrary doctrines3 became angry and jealous. Sometimes they cut the tree down, sometimes they plucked it up, and cast it to a distance, but it grew again on the same spot as at first. Here also is the place where the four Buddhas walked and sat, and at which a tope was built that is still existing.

1 Sha-che should probably be Sha-khe, making Cunningham’s identification of the name with the present Saket still more likely. The change of {.} into {.} is slight; and, indeed, the Khang-hsi dictionary thinks the two characters should be but one and the same.

2 This was, no doubt, what was called the danta-kashtha, or “dental wood,” mostly a bit of the /ficus Indicus/ or banyan tree, which the monk chews every morning to cleanse his teeth, and for the purpose of health generally. The Chinese, not having the banyan, have used, or at least Fa-hien used, Yang ({.}, the general name for the willow) instead of it.

3 Are two classes of opponents, or only one, intended here, so that we should read “all the unbelievers and Brahmans,” or “heretics and Brahmans?” I think the Brahmans were also “the unbelievers” and “heretics,” having {.} {.}, views and ways outside of, and opposed to, Buddha’s.

Visit of Ayuto by Xuanzang in 636 AD

Alexander Cunningham[5] writes that From Kanoj the two Chinese pilgrims Xuanzang followed different routes, Fa-Hian having proceeded direct to Sha-chi (the modern Ajudhya, near Fyzabad on the Ghaghra), while Hwen Thsang followed the course of the Ganges to Prayag or Allahabad. The first stage of both pilgrims would, however, appear to be the same. Fa-Hian states that he crossed the Ganges and proceeded 3 yojanas or 21 miles, to the south to the forest of Holi, where there wore several stupas erected on spots where Buddha had "passed, or walked, or sat."[6] Hwen Thsang records that he marched 100 li, nearly 17 miles, to the town of Nava-deva-kula, which was on the eastern bank of the Ganges, and that at 5 li, or nearly 1 mile, to the south-east of the town there was a stupa of Asoka, which was still 100 feet in height, besides some other monuments dedicated to the four previous Buddhas.[7] I think it probable that the two places are the same, and that the site was somewhere near Nobatganj, just above the junction

[p.383]: of the Isan river, and opposite Nanamow Ghat. But as there are no existing remains anywhere in that neighbourhood, the place has been most likely swept away by the river. This is rendered almost certain by an examination of the Ganges below the junction of the Isan. Formerly the river continued its course almost due south from Nanamow for many miles, but some centuries ago it changed its course ; first to the south-east for 4 or 5 miles, and then to the south-west for about the same distance, where it rejoined its old bed, leaving an island, some 6 miles in length by 4 in breadth, between the two channels. As Hwen Thsang's account places Nava-deva-kula on the very site of this island, I conclude that the town as well as the Buddhist monuments must all have been swept away by the change in the river's course.

A probable source of error in all short distances was their registry in yojanas instead of in kos, which would have increased the distances just fourfold. If such an error should have been committed in the case of Nava-deva-kula, the actual distance would have been only 25 li, or a little more than 4 miles, instead of 17 miles. Now in this very position, 4 miles to the south-east of Kanoj, there is a well-known place on the Chota Ganga, called Deokali, which is the same name as that given by the pilgrim, if we omit the first two syllables Nava, or ' new.'

On leaving Nava-deva-kula, Hwen Thsang proceeded 600 li, or 100 miles, to the south-east, and recrossing the Ganges reached the capital city of A-yu-to, which was 20 li, or upwards of 3 miles, in circuit. Both M. Julien and M. de St. Martin have identified this place with Ayodhya, the once celebrated capital of

[p.384]:Rama. I accept the probable reading of the name as Ayuda, but I differ with them altogether in looking for the capital along the line of the Ghaghra river, which is due east from Kanoj, whereas Hwen Thsang states that his route was to the south-east. It is of course quite possible that the pilgrim may occasionally use the generic name of Ganges as the appellation of any large river, such for instance as the Ghaghra, but in the present case, where the recorded bearing of south-east agrees with the course of the Ganges, I think it is almost certain that the Ganges itself was the river intended by the pilgrim. But by adopting the line of the Ganges we encounter a difficulty of a different kind in the great excess of the distance between two such well-known places as Kanoj and Prayag. According to Hwen Thsang's route, he first made 100 li to Nava-deva-kula, then 600 li to Ayuto then 300 li by water to Hayamukha, and lastly 700 li to Prayaga. All these distances added together make a total of 1700 li, or 283 miles, which is just 100 miles, or 600 li, in excess of the true distance. But as a part of the journey, viz. 300 li, or 50 miles, was performed by water, the actual excess may perhaps not be more than 85 or 90 miles ; although it is doubtful whether the distance of 300 li may not have been the road measurement and not the river distance. It is sufficient for our purpose to know that Hwen Thsang's recorded measurement is somewhere about 100 miles in excess of the truth. The only explanation of this error that suggests itself to me is, that there may have been an accidental alteration of one set of figures, such as 60 li for 600 li, or 700 li for 70 li. Supposing that the former was the case, the

[p.385]:distance would be shortened by 540 li, or 90 miles, and if the latter, by 630 li, or 105 miles. This mode of correction brings the pilgrim's account into fair accordance with the actual distance of 180 miles between Kanoj and Prayag.

By adopting the first supposition, Hwen Thsang's distance from Nava-deva-kula to the capital of Ayuto will be only 60 li, or 10 miles, to the south-east, which would bring him to the site of an ancient city named Kakupur, just 1 mile to the north of Seorajpoor, and 20 miles to the north-west of Cawnpore. The subsequent route would have been from Kakupur to Daundiakhera by boat, a distance of exactly 50 miles, or 300 li, and from thence to Prayag, a distance of more than 100 miles, which agrees with the 700 li, or 116 miles, of the pilgrim. By the second supposition the subsequent route would have been from Khara to Papamow by water, about 50 miles, and thence to Prayag, about 8 miles of land, which agrees with the 70 li of the proposed correction. In favour of this last supposition is the fact that the bearing from Khara to Papamow of east by south is more in accordance with Hwen Thsang's recorded east direction than the south-east bearing of Daundiakhera from Kakupur.

I confess, however, that I am more inclined to adopt the former correction, which places the chief city of Ayuo at Kakupur, and the town of Hayamuka at Daundiakhera, as we know that the last was the capital of the Bais Rajputs for a considerable period. I am partly inclined to this opinion by a suspicion that the name of Kakupur may be connected with that of Bagud, or Vagud, of the Tibetan books.[8] According to this

[p.386]:authority a Sakya, named Shampaka, on being banished from Kapila retired to Bagud, carrying with him some of Buddha's hair and nail-parings, over which he built a chaitya. He was made king of Bagud, and the monument was named after himself (? Shampaka stupa). No clue is given as to the position of Bagud, but as I know of no other name that resembles it, I am inclined to think that it is probably the same place as the Ayuto or Ayuda of Hwen Thsang. The two names have a striking resemblance ; and as each of the places possessed a stupa containing some hair and nails of Buddha, I think that there are strong grounds for the identification.

Kakupur is well known to the people of Kanoj, who affirm that it was once a large city with a Raja of its own. It is exactly 10 miles, or 5 kos, to the north-west of Bithur, and the land between the two places is called Panj-kosi bhitar utpalaranya, or the "five kos circuit of Utpalaranya." The ruined mound of Kakupur is said to be the remains of a fort named Chhatrpur, which was founded by Raja Chhatr Pal Chandel 900 years ago. Kakupur also possesses two famous temples dedicated to Kshireshwara Mahadeva, and Ashwatthama son of Drona, near which a large annual fair is held. These details are sufficient to show that the place must have been of some consequence in former days ; while the name of Aswatthama carries it back to the time of the Mahabharata.

Hwen Thsang makes Ayuto 5000 li, or 833 miles, in circuit,[9] which is so utterly beyond all possibility that I reject it without hesitation. Perhaps we should read 500 li, or 83 miles, which would restrict the

[p.387]:territory to the small tract lying between Kakupur and Cawnpore, and thus leave room for the next district of Hayamukha.