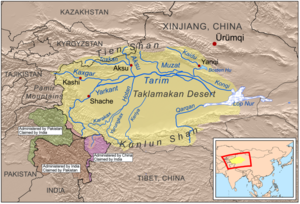 Yarkand (यारकन्द) (Yarkant) is name of a River and also County in China.

Yarkand River is a river in the Xinjiang Uyghur Autonomous Region of western China. It is one of the headstreams of the Tarim River.

The river originates in the Karakoram range in the south of the Kashgar Prefecture. A notable tributary of the upper Yarkand River is the Shaksgam River, which is also known in its lower course (before falling into the Yarkand) as the Keleqing River.

A part of the river valley is known to the Kyrgyz people as Raskam, and the river itself is also called the Raskam River.[1] The river is also known as the Zarafshan River. The area was once claimed by the ruler of Hunza.

Shache (Yarkant) County or Yarkand County (lit. Cliff city) is a county in the Xinjiang Uyghur Autonomous Region, China, located on the southern rim of the Taklamakan desert in the Tarim Basin. It is one of 11 counties administered under Kashgar Prefecture. Yarkant, usually written Yarkand in English, was the seat of an ancient Buddhist kingdom on the southern branch of the Silk Road.

The territory of Yārkand is first mentioned in the Book of Han (1st century BCE) as "Shache" (Old Chinese, approximately, *s³a(j)-ka), which is probably related to the name of the Iranian Saka tribes.[2]

Descriptions in the Hou Hanshu ('History of the Later Han') contain insights into the complex political situation China faced in attempting to open up the "Silk Routes" to the West in the 1st century CE. According to the "Chapter on the Western Regions" in the Hou Hanshu:

"Going west from the kingdom of Suoju (Yarkand), and passing through the countries of Puli (Tashkurghan) and Wulei (centred on Sarhad in the Wakhan), you arrive among the Da Yuezhi (Kushans). To the east, it is 10,950 li (4,553 km) from Luoyang."