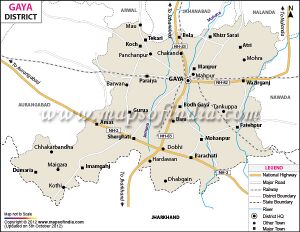 Kurkihar (कुर्किहार) is an ancient village in Gaya district in Bihar. Kurkihar is a small village located on a site that was earlier a Buddhist monastery named Kukkutapada or Kukkar-vihar. The true name of Kurkihar is said to be Kurak-vihar. 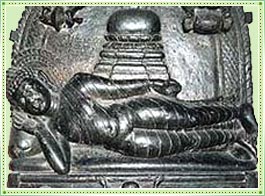 A bronze artifact from Kurkihar

The historical site was visited by Buddhist pilgrims in the ancient times including the Chinese travelers Fa-Hien and Hieun Tsang. The antiquarian remains of Kurkihar were first brought to notice by Kittoe in 1847. He visited the place twice and on his second visit spent four days collecting “ten cart loads of idols, all Buddhist and many of the Tantrika period”, some of which are now housed in the Indian Museum, Kolkata. In 1866, Peppe took photographs of some of the images at Kurkihar and published his brief notes thereon. Cunningham also visited here twice in 1861-62 and 1879-80 respectively. Stein also paid an exploratory visit to Kurkihar; but it was chiefly with a view to identify places visited by Hiuen Tsang in the locality. In 1930 Kurkihar suddenly came to limelight following an important discovery of a hoard of 226 bronzes and five other objects, which were unearthed from the main mound. These artefacts included a range – Buddhas, Bodhisattvas, Stupas, Bells and ritual objects. Today, these artefacts adorn the shelves of a special room in the Patna Museum.[1]

The remains at Kurkihar consist of several ruined mounds, in which numerous statues and small votive topes of dark blue stone have been found. The principal mass of ruin, about 600 feet square, lies immediately to the south of the village. A second less extensive mound lies to the south-west; and there is a small mound, only 120 feet square, to the north of the village. The last mound is called Sugatgarh, or the “house of Sugata”, one of the well known titles of Buddha. In the principal mass of ruin, the late Major Kittoe dug up a great number of statues and votive topes; and a recent excavation on the west side showed the solid brick-work of a Buddhist stupa. In the north-west corner of this excavation the relic chamber had been reached, and I was privately informed that a small figure and some remains had been discovered inside. But the head man of the village stoutly denied that anything had been found, and all the villagers then denied the discovery also.”[2]

Excavation work carried out in the 1930 unearthed 148 Buddhist bronze artefacts from this area. A whole lot of these artefacts are now placed in the museums of Patna and Kolkata.

Regarding the inscriptions at the site Cunningham mentions :-

“I procured several short but interesting inscriptions at Kurkihar. The name of Sakala is mentioned in several of them, and also Kerala in Dakshinades. The age of these inscriptions, judging from the shapes of the letters, must be about A.D. 800 to 1000.”[3]

There are two Hindu temples here in the village, out of which one still preserves a commendable collection of Buddhist sculptures discovered from the area. Prominent amongst these is the exquisite statue of Akshobhya Buddha which stands just outside the entrance of the temple. Also, instantly noticeable are the fourteen carved pillars that date back to the 9th century.[4]

Votive stupas of varying sizes are also seen at the edge of a large tank. Moreover, a number of sculptures have been moved over by the local zamindar to his own house. Out of these, the most interesting one is a relievo representing a teaching bodhisattva seated in a niche of a rock between two female attendants. The frieze above shows devotees approaching a stupa with offerings while the top part of the relievo shows five bodhisattvas, each enshrined in a small niche.[5]

Around 3 miles from the village, at Punwan, there are a lot more of Buddhist relics to be seen. However, unfortunately, they have not been preserved well and much of it has been destroyed by the digging activities of the villagers. [6]

Also, a temple by the name of Triloknath, which once existed there has been carried away for the bricks.[7]

The Ancient Legend of Kasyapa at Kurkihar: In the report of 1879-80, Cunningham mentions that he again visited Kurkihar with the object of exploring the hill to the north of the town, as it was the scene of some of Maha-kasyapa’s miracles, and eventually of his nirvana or death. He mentions the account of Kurkihar as given by Fa Hian (Translation by Herbert A. Gilles) as follows – “The great Chia-yeh (Kasyapa) is at present at the mountain. He split the mountain to get in. The place where he entered will barely admit a man. Going down to a great distance there is a niche in which stands a full length image of Chia-yeh. Outside the niche is the place where he used to wash his hands, and the people of the district, if they have some headache, use this earth (from that spot) for plasters, and are at once cured. Therefore, since that time there have been Lo-hans on this mountain, and when the devotees of the neighbouring countries come yearly to make their offerings to Chia-yeh, the Lo-hans appear by night to the steadfast ones, converse with them, and resolve their doubts; then they suddenly vanish. On this mountain there are quantities of trees; also a great many lions, tigers, and wolves; so that the travelers have to be cautious.” [8]

He further mentions that Hiuen Tsang mentions the hills as lofty and scarped, with three bold peaks that spring into the air. These peaks have been identified by Cunningham already with the three peaks of the Murali mountain nearby at 3 miles from Kurkihar. According to Hieun Tsang “twenty years after he had received Buddha’s instructions, Kasyapa ascended the Kukkuta-pada mountain on the north side, and walked along towards the south-west, where he was stopped by a scarped face. He struck the rock with his staff, and cleft it into two, and then marched boldly into the heart of the mountain. On reaching the middle peak, he took up Buddha’s chivara (dress). The three peaks approached and retired (or closed and opened) according to his mere wish. When Maitreya visited the mountain, Kasyapa presented him with the Chivara of the Buddha, and after performing some miracles, entered into nirvana.”[9]

Sugatgarh Mound: This mound was mentioned by Cunningham and does not seem to have been explored further. Saraswati and Sarkar point out that from an eye copy of an inscription from Kurkihar published in Cunningham’s first report the name Sugata-gandh-Kuti is specifically mentioned in it as having been built by a devotee Abhaya-Chandra-muni from Kerala in Dakshinadesa. [10]

Mahavansa/Chapter 37 mentions ....An adherent of the thera Samghamitta, the ruthless minister Sona, a favourite servant of the king Mahasena, and (with him) shameless bhikkhus, destroyed the splendid Lohapasada seven stories high, and carried away the (material of the) various buildings from hence to the Abhayagiri (vihara), and by means of the many buildings that were borne away from the Mahävihära the Abhayagiri-vihara became rich in buildings. Holding fast to his evil friend, the thera Samghamitta, and to his servant Sona, the king wrought many a deed of wrong. The king sent for the great stone image from the Päcinatissapabbata (vihära) and set it up in the Abhayagiri (vihra). He set up a building for the image, a temple for the Bodhitree, a beautiful relic-hall and a four-sided hall, and he restored the (parivena) called Kukkuta. Then by the ruthless thera Samghamitta was the Abhayagiri-vihara made stately to see.

Alexander Cunningham[12] writes that From the Bodhi-drum Hwen Thsang crossed the river Nairanjan, and visited a stupa named Gandha-hasti, or the " Scented Elephant," near which there was a tank and a stone pillar.[13] The ruins of the stupa and the lower portion of the shaft of the pillar still exist at Bakror, on the eastern bank of the Lilajan river, about 1 mile to the south-east of Bauddha-Gaya.

[p.460]: Mo-ho, or Mohana Nadi, and entered a large forest, where lie saw another stone pillar. Then proceeding to the north-east for 100 li, or nearly 17 miles, he reached the mountain of Kiu-kiu-cha-po-tho, or Kukkutapada, or " Cock's-foot," which was remarkable for three bold peaks. According to Fa-Hian's account, the Hill of the Cock's-foot was 3 li, or half a mile, to the south of the holy tree of Bauddha-Gaya. For 3 li we should no doubt read 3 yojanas, or 21 miles, which agrees very closely with Hwen Thsang's distance of 17 miles, plus about two miles for the crossings of the two rivers, or altogether 19 miles.

I have already identified this place with the present Kurkihar, which, though omitted in the maps, is perhaps the largest place between the cities of Gaya and Bihar. It is situated 3 miles to the north-east of Vazirganj, 16 miles to the north-north-east of Gaya, and 20 miles to the north-east of Bauddha-Gaya.[14] The true name of Kurkihar is said to be Kurak-vihar, which I believe to be only a contracted form of Kukkatapada-Vihara or "Cock's-foot Temple," as the Sanskrit Kukkuta is the same word as the Hindi Kukkar, or Kurak, a " cock." The present Kurkihar therefore corresponds both in name and in position with the famous " Cock's-foot Hill " of the Buddhists. There is, however, no three-peaked hill in its neighbourhood ; but about half a mile to the north of the village three rugged hills rise boldly out of the plain, which, as they stand so close together that their bases meet, may fairly be identified with the three-peaked hill of Hwen Thsang. This identification is confirmed by the presence of several ruined mounds, in which numerous Buddhist statues and votive stupas have been found.