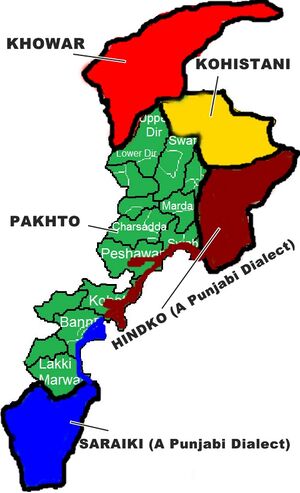 Khyber Pakhtunkhwa (खैबर पख्तूनख्वा ) , formerly the North-West Frontier Province (N.W.F.P.), is one of the four provinces of Pakistan.

Located in the northwestern part of Pakistan, the province borders the Federally Administered Tribal Areas to the west and south, Gilgit–Baltistan to the north-east, Azad Kashmir to the east, while both Punjab and the Islamabad Capital Territory lie to the south-east of the province. The province of Balochistan is located to the south of Khyber Pakhtunkhwa. Khyber Pakhtunkhwa also shares an international border with Afghanistan, and is connected to the northern reaches of Afghanistan via the famous Khyber Pass - the same pass through which the armies of Alexander the Great marched on their military expedition through the Indian Subcontinent.

Khyber Pakhtunkhwa is also the site of ancient kingdom of Gandhara and the ruins of both its capital, Purushapura (modern day Charsadda), and its most prominent center of learning in the Peshawar Valley, Takht-i-Bahi. It has been under the suzerainty of the Persians, Greeks, Mauryans, Kushans, Shahis, Ghaznavids, Mughals, Sikhs, and British Raj throughout its long history.

The ancient Aryan Migration is believed to have taken place at approximately 2000 BCE, when semi-nomadic peoples entered the Gangetic plains of India after having passed modern Khyber Pakhtunkhwa's Khyber Pass.[1]

At around 516 BCE., Darius Hystaspes sent Scylax, a Greek seaman from Karyanda, to explore the course of the Indus river. Darius Hystaspes subsequently subdued the races dwelling west of the Indus and north of Kabul, and incorporated them into the Indo-Greek Gandharan civilization, which reached its zenith between the sixth and first centuries BCE, and which features prominently in the Hindu epic poem, the Mahabharatha.[2]

Gandhara was incorporated into the Persian Empire under the satrapy system of government. The satrapy of Gandhara is recorded to have sent troops for Xerxes' invasion of Greece in 480 BCE.

In the spring of 327 BCE Alexander the Great crossed the Indian Caucasus (Hindu Kush) and advanced to Nicaea, where Omphis, king of Taxila and other chiefs joined him. Alexander then dispatched part of his force through the valley of the Kabul River, while he himself advanced into modern Khyber Pakhtunkhwa's Bajaur and Swat regions with his troops.[3]

Having defeated the Aspasians, from whom he took 40,000 prisoners and 230,000 oxen, Alexander crossed the Gouraios (Panjkora River) and entered into the territory of the Assakenoi - also in modern day Khyber Pakhtunkhwa. Alexander then made Embolima (thought to be the region of Amb in Khyber Pakhtunkhwa) his base. The ancient region of Peukelaotis (modern Hashtnagar, 27 km north-west of Peshawar) submitted to the Greek invasion, leading to Nicanor, a Macedonian, being appointed satrap of the country west of the Indus, which includes the modern Khyber Pakhtunkhwa province.[4]

After Alexander's death in 323 BCE Porus obtained possession of the region, but was murdered by Eudemus in 317 BCE. Eudemus then left the region, and with his departure Macedonian power collapsed.

Sandrocottus (Chandragupta), the founder of the Mauryan dynasty, then declared himself master of the province. His grandson, Ashoka, made Buddhism the dominant religion in ancient Gandhara.[5]

After Ashoka's death the Mauryan empire collapse, just as in the west the Seleucid power was rising. The Greek princes of neighboring Bactria (in modern Afghanistan) took advantage of the power vacuum to declare their independence. The Bactrian kingdoms were then attacked from the west by the Parthians and from the north (about 139 BCE) by the Sakas, a Central Asian tribe. Local Greek rulers still exercised a feeble and precarious power along the borderland, but the last vestige of Greek dominion was extinguished by the arrival of the Yueh-chi.[6]

The Yueh-Chi were a race of nomads that were themselves forced southwards out of Central Asia by the nomadic Xiongnu people. The Kushan clan of the Yuek Chi seized vast swathes of territory under the rule of Kujula Kadphises. His successors, Vima Takto and Vima Kadphises, conquered the north-western portion of the Indian subcontinent. Vima Kadphises was then succeeded by his son, the legendary king Kanishka, who himself was succeeded by Huvishka, and Vasudeva I.[7] Under the reign of Vasudeva, who abandoned Buddhism in favor of Hinduism, the dominions of the Kushan empire shrank to an area roughly approximating the boundaries of modern Khyber Pakhtunkhwa.

Shahi dynasty: During the early 1st millennium CE, prior to Muslim conquests, the Khyber Pakhtunkhwa region was ruled by the Shahi dynasty. The early Shahi kings were Buddhist, like their Kushan predecessors prior to the reign of Vasudeva. The later Shahi kings of Kabul and Gandhara were Hindu, and had strong ties to ruling dynasties in neighboring regions of modern Kashmir and Punjab. The Hindu Shahis are believed to have been a ruling elite of a predominantly Buddhist, Hindu and Shamanistic population and were thus patrons of numerous faiths. Various artefacts and coins from their rule have been found that show evidence of their multicultural domain.

By the time the Chinese monk Xuanzang visited the region early in the 7th century, the region was ruled by affiliates of the Shahi kings, but was no longer under direct rule of the Shahis, whose efforts were focused on regions to the east of modern Khyber Pakhtunkhwa. Shahi suzerainty continued in the region until 870 CE when local noblemen began to carve out their own fiefdoms largely independent of Shahi control, but nominally subservient to the Shahi dynasty. The remnants of Shahi rule were wiped out by Mahmud of Ghazni after the defeat of Jayapala at the Battle of Peshawar on November 27, 1001.

When Ghazni arrived in the region, Hinduism, Zoroastrianism, Buddhism and Shamanism were the prominent religions. Local Pashtun and Dardic tribes converted to Islam, while retaining some local traditions (albeit altered by Islam) such as Pashtunwali or the Pashtun code of honor. Vestiges of shamanism are still to be found in the Chitral Valley, where the Kalash people still practice their pre-Islamic faith.

Between 963 and 1187 CE, the area of modern Khyber Pakhtunkhwa became part of larger Islamic empires, including the Ghaznavid Empire (975-1187), headed by Sultan Mahmud of Ghazni, and the empire of Muhammad Shahabuddin Ghauri (reigned 1202–1206). The Ghaznavid domain included large swathes of modern Afghanistan, Pakistan, and India. It was ruled from its capital at Lahore from 1151 to 1186.

Mughal suzerainty over the Khyber Pakhtunkhwa region was partially established after Babar, the founder of the Mughal Empire, invaded the region in 1505 CE via the Khyber Pass. He was forced to retreat westwards to Kabul, but returned to defeat Ibrahim Lodi, the last Lodhi king, in 1525 CE The local Pashtun tribesmen quickly pledged loyalty to the Mughal Empire, and largely remained under nominal Mughal rule until the arrival of the Sikhs in the 19th century.

Under the reign of Babar's son, Humayun, direct Mughal rule was briefly challenged with the rise of the Pashtun king, Sher Shah Suri, who began construction of the famous Grand Trunk Road - which links Kabul, Afghanistan with Chittagong, Bangladesh over 2000 miles to the east. Later, local rulers once again pledged loyalty to the Mughal emperor. Mughal rule over the region was again interrupted by the invasion of Persia's Nadir Shah, who in 1739 sacked the Mughal capital at Delhi with the help of Pashtuns from the modern Khyber Pakhtunkhwa region.[citation needed] The area fell subsequently under the rule of Afghans under the Durrani Empire. Muslim rule was interrupted by a brief invasion of the Hindu Marathas, who established a tenuous rule over the region from 1758 following the 1758 battle of Peshawar. Durrani rule was re-established eleven months later in 1759, and lasted until 1818 when the Sikhs invaded the region under the command of Maharaja Ranjit Singh.

Sikh Rule - Sikhs continue to rule the region for several decades. Sikh rule came to an end after the British East India Company defeated the Sikhs during the Second Anglo-Sikh War in 1849.

British East India Company defeated the Sikhs during the Second Anglo-Sikh War in 1849, and incorporated small parts of the region into the Province of Punjab. While Peshawar was the site of a small mutiny against British during the Indian Rebellion of 1857, local Pashtun tribes throughout the region generally remained neutral and supportive of the British as they detested the Sikhs, in contrast to the rest of British India which rose up in revolt against the British.

Khyber Pakhtunkhwa consists of twenty-six districts, comprising twenty-one Settled Area Districts and five Provincially Administered Tribal Area (PATA) Districts. The administration of the PATA districts is vested in the President of Pakistan and the Governor of Khyber Pakhtunkhwa, by Articles 246 and 247 of the Constitution of Pakistan.

The twenty-six districts are: