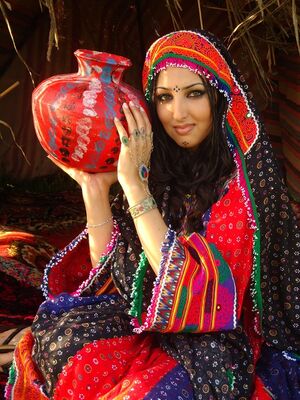 Chitral (चितराल) or Chetrar (Urdu: چترال) (Khowar:چھترار) (Persian: چیترال‎), is the capital of the Chitral District, situated on the western bank of the Kunar River (also called Chitral River), in Pakistan.

Chitral (Pashto: چترال) is one the 24 districts in the Khyber Pakhtunkhwa Province of Pakistan. The district was formed in 1969.

The town is at the foot of Tirich Mir, the highest peak of the Hindu Kush, 25,289 ft (7,708 m) high. Chitral district is situated in Malakand Division, lying along the Afghanistan border. It is connected with the Dir District via the Lowari Pass.

The easiest access to Chitral is in the southwest along the Chitral or Kunar Valley towards Jalalabad. This route is open all year and provides direct access to Kabul. However the Pakistan–Afghanistan border (Durand Line) prevents this being used as an internal route to Peshawar and the south.

Buddhist and Hindu period - Chitral was a Hindu country before the extension of Islam, and traces of Buddhism[1] are also found.[9]

H. W. Bellew writes that The Sakarauloi of Herodotus are by some supposed to be represented by the modern Sarikoli, but a preferable identification is obtained by reading Sakatauroi instead of Sakarauloi ; we should then have on the east of Baktria the great and powerful Kataur or Kator nation, which established contemporary branch dynasties at Kabul and in Kashmir, and which is at this day represented in Afghanistan by the Shah-Kator princes of Chitral and Kashkar. [2]

H. W. Bellew writes that Katar, or Kator, is the same people as the Katoran or Katorman, who established a Turk dynasty which ruled contemporaneously in two branches at Kabul and Peshawar respectively, from the beginning of the fifth to the latter part of the ninth century, when, after losing much of their power and territory to the Tuar Rajput kings of Delhi, they were finally overthrown by them and the Ghaznavis. Under the rule of the Kator Yuechi (Getai or Jata) Buddhism was the religion of the country, but during the century or so of Tuar Rajput sovereignty, Brahminism was the dominant religion, till the Hindu was finally dispossessed by Sabaktagin, who founded the Ghaznavi Turk dynasty. The Shah Katori of Kashkar and Chitral, who, as above suggested, represent the Sakarauloi of Strabo, are the same people as the Katar of Kafiristan, the name of which country was formerly Kator ; at least in the time of Tamerlane, the beginning of the fifteenth century. [3]

The Kator (or Katoar or Kataria or Kshatriya), the Kotol or Kitolo of the Chinese or Kedara or Katorman of Abu Rehan or Cidaritae or White Huns of Priscus, are none else but Yueh-Chih. [4]