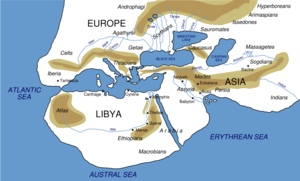 Caucasus is a region at the border of Europe and Asia.

Pliny the Elder's Natural History (AD 77-79) derives the name of the Caucasus from the Scythian kroy-khasis (“ice-shining, white with snow”).[1]

The northern portion of the Caucasus is known as the Ciscaucasus and the southern portion as the Transcaucasus.

The Ciscaucasus contains the larger majority of the Greater Caucasus Mountain range, also known as the Major Caucasus mountains. It includes Southwestern Russia and northern parts of Georgia and Azerbaijan.

The main Greater Caucasus range is generally perceived to be the dividing line between Asia and Europe. The highest peak in the Caucasus is Mount Elbrus (5,642 m) in the western Ciscaucasus in Russia, and is generally considered as the highest point in Europe.

Sabha Parva, Mahabharata/Book II Chapter 25 mentions that the Pandavas crossing the White mountains (शवेतपर्वत), subjugated the country of the Kimpurushas ruled by Darumaputra, after a collision involving a great slaughter of Kshatriyas, and brought the region under his complete sway.

Having reduced that country, the son of Indra (Arjuna) with a collected mind marched at the head of his troops to the country called Hataka, ruled by the Guhyakas.

Subjugating them by a policy of conciliation, the Kuru prince beheld (in that region) that excellent of lakes called Manasa and various other lakes and tanks sacred to the Rishis. And the exalted prince having arrived at the lake Manasa conquered the regions ruled by the Gandharvas that lay around the Hataka territories. Here the conqueror took, as tribute from the country, numerous excellent horses called Tittiri, Kalmasha, Manduka.

At last the son of the slayer of Paka, arriving in the country of North Harivarsha desired to conquer it. Thereupon certain frontier-guards of huge bodies and endued with great strength and energy, coming to him with gallant hearts, said to Arjuna that -

"This country can be never conquered by you. They advised him to return. Who ever enters this region, if human, is sure to perish. Your conquests have been enough. Nor is anything to be seen here that may be conquered by you. The Northern Kurus live here. There cannot be war here. Even if you enter it, you will not be able to behold anything, for with human eyes nothing can be seen here. If, however you want anything else, tell us, so that we may do you bidding".

Thus addressed by them, Arjuna smilingly addressing them, said,--'I desire the acquisition of the imperial dignity by Yudhishthira the just, of great intelligence. If your land is shut against human beings, I shall not enter it. Let something be paid unto Yudhishthira by you as tribute. Hearing these words of Arjuna, they gave him as tribute many cloths and ornaments of celestial make, silks of celestial texture and skins of celestial origin.

Pliny the Elder's Natural History (AD 77-79) derives the name of the Caucasus from the Scythian kroy-khasis (“ice-shining, white with snow”).

It means Caucasus is nothing but Shvetaparvata mentioned in shloka 1. [2]

The Caucasus is one of the most linguistically and culturally diverse regions on Earth. The nation states that comprise the Caucasus today are the post-Soviet states Georgia, Armenia, and Azerbaijan.

The Russian divisions include Krasnodar Krai, Stavropol Krai, and the autonomous republics of Adygea, Karachay–Cherkessia, Kabardino-Balkaria, North Ossetia, Ingushetia, Chechnya, and Dagestan. Three territories in the region claim independence but are recognized as such by only a handful or by no independent states: Abkhazia, Nagorno-Karabakh and South Ossetia.

Located on the peripheries of Turkey, Iran, and Russia, the region has been an arena for political, military, religious, and cultural rivalries and expansionism for centuries. Throughout its history, the Caucasus was usually incorporated into the Iranian world. At the beginning of the 19th century, the Russian Empire conquered the territory from the Qajars.[3]

Under Ashurbanipal (669-627 BC) the boundaries of the Assyrian Empire reached as far as the Caucasus Mountains. Other ancient kingdoms of the region included Armenia, Albania, Colchis and Iberia, among others. These kingdoms were later incorporated into various Iranian empires, including Media, Achaemenid Empire, Parthia, and Sassanid Empire.

In 95-55 BC under the reign of Armenian king of kings Tigranes the Great, the Kingdom of Armenia became an empire, growing to include: Kingdom of Armenia, vassals Iberia, Albania, Parthia, Atropatene, Mesopotamia, Cappadocia, Cilicia, Syria, Nabataean kingdom, and Judea. The empire stretched from the Caucasian Mountains to Egypt and from the Mediterranean to the Caspian Sea, including a territory of 3,000,000 km2 (1,158,000 sq mi), and becoming the last strong Hellenist king, and the strongest in the region by 67 BC. By this time, Zoroastrianism had become the dominant religion of the region (except for in the Kingdom of Armenia); however, the region would go through two other religious transformations. Owing to the rivalry between Persia and Rome, and later Byzantium, the latter would invade the region several times, although it was never able to hold the region.

However, because the Kingdom of Armenia was the first nation to adopt Christianity as state religion (in 301 AD), and Caucasian Albania and Georgia had become Christian entities, Christianity began to overtake Zoroastrianism. With the Muslim conquest of Persia, the region came under the rule of the Arabs, and soon the Emirate of Armenia was formed. But after several rebellions in 884–885 AD Kingdom of Armenia became independent, and several times crushed Arab armies. At that time, the capital of the Kingdom of Armenia was Ani, with a population of 200,000 and a city of "1001 churches". It was at its peak under the reign of Gagik I, when it stretched from Byzantine Empire to Caucasian Albania, from Caucasian Iberia to Mesopotamia, including also vassal states such as Caucasian Albania and Caucasian Iberia, until in 1045 AD the kingdom was conquered by Byzantine Empire. In the 12th century, the Georgian king David the Builder drove the Muslims out from Caucasus and made the Kingdom of Georgia a strong regional power.

In 1194–1204 Georgian Queen Tamar's armies crushed new Turkish invasions from the south-east and south and launched several successful campaigns into Turkish-controlled Southern Armenia. The Georgian Kingdom continued military campaigns outside of Caucasus. As a result of her military campaigns and the temporary fall of the Byzantine Empire in 1204, Georgia became the strongest Christian state in the whole Near East area. The region would later be conquered by the Ottomans, Mongols, local kingdoms and khanates, as well as, once again, Persia, until its subsequent conquest by Russia.

In modern times, the Caucasus became a region of war among the Ottoman Empire, Iran and Russia, and was eventually conquered by the latter (see Caucasian Wars).