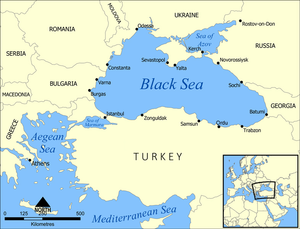 Black Sea is a sea in south-eastern Europe.

It is bounded by Europe, Anatolia and the Caucasus and is ultimately connected to the Atlantic Ocean via the Mediterranean and the Aegean Seas and various straits. The Bosphorus Strait connects it to the Sea of Marmara, and the Strait of the Dardanelles connects that sea to the Aegean Sea region of the Mediterranean. These waters separate eastern Europe and western Asia. The Black Sea is also connected to the Sea of Azov by the Strait of Kerch.

Black Sea forms in an east-west trending elliptical depression which lies between Bulgaria, Georgia, Romania, Russia, Turkey, and Ukraine. It is constrained by the Pontic Mountains to the south, the Caucasus Mountains to the east and features a wide shelf to the northwest. The longest east-west extent is about 1,175 kilometres.

Strabo's Geography (1.2.10) reports that in antiquity, the Black Sea was often just called "the Sea" (ho pontos). For the most part, Graeco-Roman tradition refers to the Black Sea as the 'Hospitable sea', Euxeinos Pontos (Εὔξεινος Πόντος). This is a euphemism replacing an earlier 'Inhospitable Sea', Pontos Axeinos, first attested in Pindar (early fifth century BCE,~475 BC). Strabo (7.3.6) thinks that the Black Sea was called "inhospitable" before Greek colonization because it was difficult to navigate, and because its shores were inhabited by savage tribes. The name was changed to "hospitable" after the Milesians had colonized the southern shoreline, the Pontus, making it part of Greek civilization.

It is also possible that the name Axeinos arose by popular etymology from a Scythian Iranic axšaina- 'unlit,' 'dark'; the designation "Black Sea" may thus date from Antiquity.