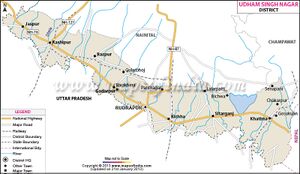 Kashipur (काशीपुर) is a city in Udham Singh Nagar district in Uttarakhand.

Kashipur was named after Kashinath Adhikari, the founder of the township and governor of the pargana, one of the officers of the Chand Kings of Kumaon in the 16th and 17th centuries.[1]

Kashipur was known as Govishana, during the time of Harshavardhana (606–647 AD). The ruins of the large settlement of those days can be still seen near the city.[2]

Archaeological Survey of India[5] tells us that Kashipur is identified by A. Cunningham with Kiu-pi-shwang-na of Hiuen Tsang, which is rendered into Sanskrit by Julien as Govisana. Cunningham traced remains of a large structure at Bhim-Gaja the highest place at the site. The ASI conducted excavations here in the year 1939-40, 1965-66 and 1970-01 in order to reveal the details of the structure traced by Cunningham. Excavation revealed substantial part of the plan of the temple built in three different phases. Initially, the temple appear to have started as soiled brick built high platform surmounted possibly by sanctum during Gupta period but later, two encircling walls probably in 6th -7th century AD were laid around it covering it finally into an extensive and impressive Panchayatana complex.

Since the excavation was aimed to obtained the detail plan of the temple, hence, no attempt was made to reveal the complete cultural sequence of the site, however pottery collected from the site revealed that site remained under occupation from Painted Grey Ware period to the early medieval time. The thick brick debris accumulated against the wall of the temple contained copper coins, copper and glass bangles, copper rings, terracotta and, stone beads, nails and chisels of different period.

Dr. Kashi Prasad Jaiswal writes at Page 29 of his book entitled 'India of the Dark Ages' that the Nags had three capitals i.e. Mathura, Kashipur and Padmavati after first century AD. The King of Padmavati was known by the name of Nag. The eldest of his dynasty was King Gajvarkar. [6]

Visit by Xuanzang in 636 AD

Xuanzang visited Govisana in 636 AD. Sir Alexander Cunningham[7] writes that To the south-east of Madawar, at a distance of 400 li, or 67 miles, Hwen Thsang places the kingdom of Kiu-pi-shwang-na, which M. Julien renders by Govisana. The capital was 15 li, or 2½ miles, in circuit. Its position was lofty, and of difficult access, and it was surrounded by groves, tanks, and fishponds.[8] According to the recorded bearing and distance from Madawar, we must look for Govisana somewhere to the north of Muradabad. In this direction the only place of any antiquity is the old fort near the village of Ujain, which is just one mile to the east of Kashipur. According to the route which I marched, the distance is 44 kos, or 66 miles. I estimate the value of the kos by the measured distance of 59 miles between the post-offices of Bareli and Muradabad, which is always called 40 kos by the natives. The true bearing of Kashipur is east-south-east instead of south-east, but the difference is not great, and as the position of Kashipur is just as clearly indicated by the subsequent route to Ahichhatra, I feel quite satisfied that the old fort near the village of Ujain represents the ancient city of Govisana which was visited by Hwen Thsang.

Bishop Hebert[9] describes Kashipur as a "famous place of Hindu pilgrimage which was built by a divinity named Kashi 5000 years ago." But the good bishop was grossly deceived by his informant, as it is well known that the town is a modern one, it having been built about a.d. 1718 by Kashi-nath, a follower

[p.358]: of Raja Devi-Chandra of Champawat in Kumaon. The old fort is now called Ujain ; but as that is the name of the nearest village, it seems probable that the true name has been lost. The place itself had been deserted for several hundred years before the occupation of Kashipur; but as the holy tank of Dron-sagar had never ceased to be visited by pilgrims, I presume that the name of the tank must have gradually superseded that of the fort. Even at the present day the name of Dron-Sagar is just as well known as that of Kashipur.

The old fort of Ujain is very peculiar in its form, which may be best compared to the body cf a guitar. It is 3000 feet, in length from east to west, and 1500 feet in breadth, the whole circuit being upwards of 9000 feet, or rather less than 2 miles. Hwen Thsang describes the circuit of Govisana as about 12,000 feet, or nearly 2½ miles, but in this measurement he must have included the long mound of ruins on the southside, which is evidently the remains of an ancient suburb. By including this mound as an undoubted part of the old city, the circuit of the ruins is upwards of 11,000 feet, or very nearly the same as that given by Hwen Thsang. Numerous groves, tanks, and fish-ponds still surround the place. Indeed the trees arc particularly luxuriant, owing to the high level of the water, which is within 5 or 6 feet of the surface. For the same reason the tanks are numerous and always full of water. The largest of these is the Dron-sagar, which, as well as the fort, is said to have been constructed by the five Pandu brothers for the use of their teacher Drona. The tank is only 600 feet square, but it is esteemed very holy, and is much frequented by pilgrims on their way to the source of the Ganges. Its high bank-s are

[p.559]: covered -with Sali monuments of recent date. The walls of the fort are built of large massive bricks, 15 by 10 by 2½ inches which are always a sure sign of antiquity. The general height of the walls is 30 feet above the fields ; but the whole is now in complete ruin, and covered with dense jangal. Shallow ditches still exist on all sides except the east. The interior is very uneven, but the mass has a mean height of about 20 feet above the country. There are two low openings in the ramparts, one to the north-west and the other to the south-west, which now serve as entrances to the jangal, and which the people say were the old gates of the fort.

The district of Govisana was 2000 li, or 333 miles, in circuit. No king is mentioned, and the country, as I have already noticed, was most probably subject to the Raja of Madawar. It was confined on the north by Brahmapura, on the west by Madawar, and on the south and east by Ahichhatra. It must, therefore, have corresponded very nearly with the modern districts of Kashipur, Rampur, and Pilibhit, extending from the Ramganga on the west to the Shrda or Ghagra on the east, and towards Bareli on the south. With these boundaries the circuit of the district would have been about 290 miles measured direct, or upwards of 300 miles by road distance.

Kashipur is a door to the beautiful hills of Nainital and is located near Jim Corbett National Park famous for Indian tigers and elephants.