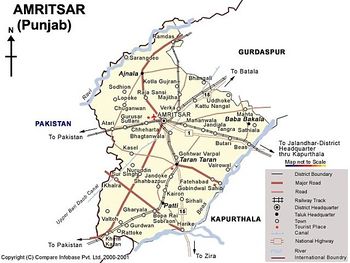 Patti (पट्टी) is a town in Tarn Taran district in Punjab.

It is located 45 km from Amritsar.

The earlier name of this town was Patti Haibatpura. [1]

Patti was the residence of Mughal Governor of Punjab during Mughal period. Before independence, Patti was a Tehsil of Lahore district. The town houses the historic Mughal Fort and remains of the city wall. It also houses a number of other historical and religious places.

Before partition Patti was a tehsil of Lahore district. After bifurcation of Amritsar revenue district it becomes part of the newly created Tarn Taran district. Patti has been a power centre and by some estimates it has been so for as long as 1000 years. In the medieval days it was known as 9 lakhi Patti. That means it generated high revenue of 9 Lakhs. The town has stories of a certain haveli of its rulers Mirzas, which was destroyed to farming activity, as they migrated to Lahore (Pakistan) in 1947.[2]

The town is situated on a mound which adds to its altitude. To the south-east of the town is a smaller but higher mound which projects a Shiv Temple. Patti houses a fortress built in 1755 A.D. which housed the local police station up-till the year 2003.[3]

Patti finds rich references in the Sikh history especially when there were increased atrocities from declining mughals on Sikh Jatthedars (raiders) who looted the residents of the city. The fortress was used to prosecute rebellions. The tales of which became a part of everyday Sikh prayer.[4]

In the battle of misls, Patti was ultimately won by Faisailpuria (Singhpuria) Misl. It is said that Maharaja Ranjit Singh (Punjab) sent his army to siege the town when Mirza Talib Ali Baig rebelled against him for Sikh atrocities on Muslims, particularly banning of their call for prayer (Azan). During this siege, part of the outer wall was demolished.

Patti is also referenced as the city of peers : seven faqeer sisters.[5]

Visit by Xuanzang in 634 AD

[p.200]: Hwen Thsang places the town of Chinapati at 500 li, or 83 miles, to the east of Taki, a position which corresponds almost exactly with Patti, a large and very old town, situated 27 miles to the north-east of Kasur, and 10 miles to the west of the Bias river.1 Unfortunately there is a discrepancy in the recorded distance of the next place visited by the pilgrim, otherwise the site of Chinapati might have been fixed absolutely with reference to its bearing and distance from the well-known city of Jalandhar. In the Life2 of Hwen Thsang, Chinapati is said to be 50 li, or 8 miles, to the north-west of the Tāmasa-vana monastery, which was 150 li, or 26 miles, to the south-west of Jalandhar. But in the Travels3 of Hwen Thsang the

[p.201]: distance of the monastery is stated at 500 li, or 83 miles, from Chinapati. This last distance is quite impossible, as it would place Chinapati about 30 miles to the north of Taki, instead of 83 miles to the east of it, as specified by the pilgrim in his journal. On the other hand, the shorter distance of eight miles would place it in the midst of the sandy bed of the Bias river, where no town has ever existed. I would, therefore, propose to read 150 li, or 25 miles, which would fix Chinapati at the town of Patti, in the very position that has already been determined by the bearing and distance from Taki.

Patti is a large brick town of considerable antiquity. According to Burnes,1 it was built in the reign of Akbar; but he is undoubtedly wrong, as the town was already the head of a Parganah in the time of Humayun, who assigned it to his servant Jaohar.2 It is called Patti-Haibatpur by Abul Fazl,3 and it is still known as Haibatpur-Patti. According to the people, the town received its Muhammadan name from Haibat Khan, whose date is not known, but I think it probable that he may be identified with Haibat Khan Shirwani, who was a leading noble in the time of Sikandar Ludi, and who commanded the army of the Afghan king against Humayun on his return from Persia. The antiquity of Patti is proved by the numbers of burnt bricks and old wells which are found about the town. The old dry wells were noted more than three hundred years ago by Jaohar,4 the attendant of the Emperor Humayun ; and the pro-

[p.202]: fusion of bricks struck Burnes,1 who remarks that " the houses are constructed of bricks, and the streets are even laid with them. Some workmen digging a well in this neighbourhood lately hit upon a former well on which was a Hindu inscription. It set forth that it had been built by one Agurtuta, of whom tradition gives no account." I visited the place in 1838, only a few years after Burnes, but I failed to recover the inscription.

Another proof of antiquity is the presence of one of the long graves or tombs, which the people call No-gaja, or " Nine-yards," that is the Giant. The Patti No-ffaja is said by Barr2 to have lived in the time of Akbar ; but these tombs, which are common in the north-west of India, are more usually referred to the Ghazis, who fell in fight against the infidels in the early ages of Muhammadanism. I would therefore assign the grave to the time of Mahmud of Ghazni, and the brick tomb which has been erected over it to the time of Akbar.

According to Hwen Thsang, the district of China-pata was about 2000 li, or 333 miles, in circuit. With these dimensions, it must have comprised the whole of the upper Bari Doab, between the Bias and the Ravi, from the foot of the hills to the old junction of the Bias and Satlej, near Firuzpur. The name of Chi-na-po-ti, or Chinapati, is referred to the time of the great Indo-Scythian king Kanishka, who fixed this place as the residence of his Chinese hostages. The pilgrim adds, that previous to their residence, India had possessed neither pears nor peaches, both of which were introduced by the Chinese hostages. The pears were

[p.203]: called Chi-na-ni, or Chinani, that is, " brought from China," and the peaches Chi-na-lo-she-fo-ta-lo, or China-raja-putra, that is, the " China King's sons." This is not quite correct, as both pears and peaches are found growing wild in the neighbouring hills. But there are now two kinds of cultivated peaches, the one round and juicy, the other flat and sweet. The first, which is called āru in Hindi, and Shaftālu in Persian, is certainly indigenous ; but the other, which is called Chini-Shaftālu, is most probably that which Hwen Thsang refers to as having been introduced from China.