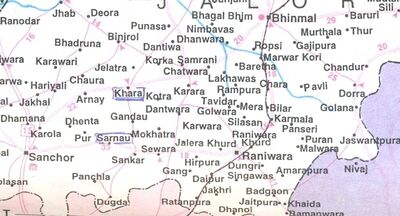 Location of Khara midway on Sanchor-Bhinmal road in District Jalor

Khara (खारा) is a large village in Sanchor tehsil of Jalor district in Rajasthan.

It is situated at a distance oh 30-30 km from both Bhinmal and Sanchor. It is well connected by Roads.[1]

Initially Bhils and Rajputs settled here and dug well in which water was hardy means Khara in Hindi, hence the name Khara of the village.

In the extended Khara village inhabit mainly Rajputs but in hamlets all around are settled Jats.

Jat Gotras people live in the Dhanis of the village.[2]