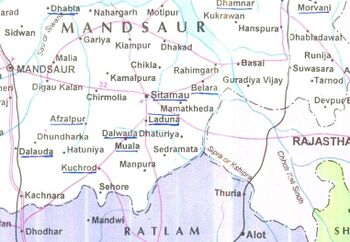 Location of Laduna in Mandsaur district

The Laduna village was founded in 5th century AD. There is a beautiful lake named Lavasagar, on the eastern bank of which is situated the Rajniwas Fort. It was earlier ruled by Dhandhu Jats and later occupied by first Rathore ruler Ratan Singh of Ratlam in 17th century. Laduna was the capital of then Sitamau state from 1750 to 1820 AD. The Rajniwas was founded by Chhatrasal, the fifth son of Ratan Singh and construction completed by later rulers. In the middle of lake is a temple known as Sewakunj. [1]