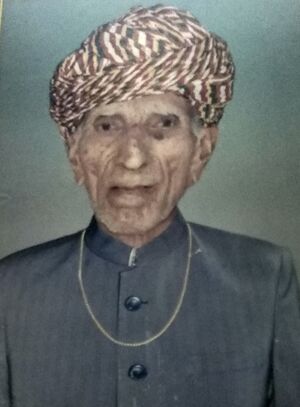 Lekhma Ram Bhakal (22.6.1922-30.6.2009) (चौधरी लिखमा राम भाकल), the first Zilla Pramukh of the country, was born to Sukhram Bhakal in a peasant family in Janana village of Nagaur district on June 22,1922. He had worked extensively to promote education among youth with Baldev Ram Mirdha.[1]

He was an advocate and a social worker in Nagaur, Rajasthan.[2]

He did his schooling from his native village Janana and then studied at Nagaur. He passed his BA from Jaswant College, Jodhpur in 1944 and then proceeded to obtain law degree from Kanpur. Having completed his LL.B. in 1946 with first division, he returned to Nagaur to practice law.[3]

During this time, local Congress leaders like Nathu Ram Mirdha and Ramniwas Mirdha were actively working to strengthen the party's position in Nagaur with prime focus on the the peasant community. Lekhma Ram came to know these leaders during his legal practice and was coaxed by them to join politics. Nathu Ram Mirdha was also his batch mate in law college. After some deliberations, he decided to join politics as he had worked extensively to promote education among youth with Baldev Ram Mirdha during his school and college days. In 1952,he contested his first assembly elections from Nagaur (west) constituency. Though he lost, the election gave him greater exposure and identity. [4]

He worked to strengthen the party and propagate its principles. His election as the pradhan of Mundwa was followed by his appointment as the first Zilla Pramukh of Nagaur on sept.27,1959, barely 6 days before the foundation of the Panchayat Raj was laid by then Prime Minister of India on 2 October 1959 at Nagaur. [5]

Though he once had made an unsuccessful attempt to enter the Rajasthan Assembly from Nagaur (West) after his initiation into politics by the late Baldev Ram Mirdha and the late Nathuram Mirdha, Lekhma Ram kept his commitment to the panchayati raj system after taking over as zila pramukh, fully devoting his time to solving problems of the rural folks and by working for village uplift. None of his four sons has so far joined mainstream politics and the family still remains rooted to the land of their forefathers. [6]

Lekhma Ram’s uniqueness lay in the fact that he was the first Zila Pramukh when Panchayati Raj was launched in the country by Prime Minister Jawaharlal Nehru from Nagaur district in Rajasthan on October 22, 1959. The panchyati raj thereafter underwent many changes -- and yet falls short of Mahatma Gandhi’s cherished dream of the their becoming “Little Republics”-- but Lekhma Ram, who was a first division law graduate from Kanpur, had kept himself confined to village life and remained the zila pramukh till August 7, 1977. [7]

Lekhma Ram was Country's first Zilla Pramukh. He toiled day and night for Nagaur's development. He laid emphasis on education,employment and modern farming. He used to visit villages regularly to monitor development. He consistently charted the path of honesty and simplicity and denounced corruption. He remained the zilla Pramukh till August 7,1977 and dedicated himself to social service. [8]

Lekhma Ram regularly came to court and always helped the poor and needy.He was also the chairman of " Bharat Sewak Samaj" for four years and remained instrumental in addressing public woes.After working for the peasant community for years,he left the political scene a decade ago due to falling health.[9]

Lekhma Ram was among the Governors, Members of Parliament and its own former Members, the recipients of the tributes paid by the Rajasthan Assembly in its customary first day business schedule on Tuesday was an unusual person—the former Zila Pramukh of Nagaur, Lekhma Ram. [11]

He found a place among the former Chief Minister and Governor of Assam Shiv Charan Mathur and former Governors B.D. Pandey and Loknath Misra and Lieutenant-Governor of Puducherry Govind Singh Gujjar in the Rajasthan Assembly Speaker Deependra Singh Shekhawat’s list of condolences by virtue of his being the first Zila Pramukh of the country. [12]

He passed away leaving a few bighas of land for his family. Despite having personal relations with the leaders likes of Nehru, he has not left behind any political legacy. Lekhma Ram was a man of vision and ethics with a penchant for development. He is survived by four sons.[13]