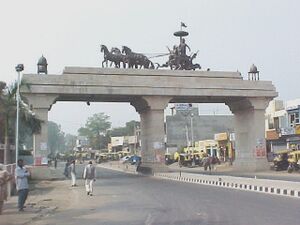 The Mahābhārata (महाभारत) is one of the two major Sanskrit epics of ancient India, the other being the Rāmāyaṇa.

With more than 74,000 verses, long prose passages, and about 1.8 million words in total, the Mahābhārata is one of the longest epic poems in the world. Including the Harivaṃśa, the Mahabharata has a total length of more than 90,000 verses.

The title may be translated as "the great tale of the Bhārata Dynasty", according to the Mahābhārata's own testimony extended from a shorter version simply called Bhārata of 24,000 verses The epic is part of the Hindu itihāsa, literally "that which happened", which includes the Ramayana but not the Purāṇas.

The story in brief

The core story of the work is that of a dynastic struggle for the throne of Hastinapura, the kingdom ruled by the Kuru clan. The two collateral branches of the family that participate in the struggle are the Kaurava and the Pandava. Although the Kaurava is the senior branch of the family, Duryodhana, the eldest Kaurava, is younger than Yudhisthira, the eldest Pandava. Both Duryodhana and Yudhisthira claim to the first in line to inherit the throne.

The struggle culminates in the great battle of Kurukshetra, in which the Pandavas are ultimately victorious. The battle produces complex conflicts of kinship and friendship, instances of family loyalty and duty taking precedence over what is right, as well as the converse.

The Mahabharata itself ends with the death of Krishna, and the subsequent end of his dynasty, and ascent of the Pandava brothers to heaven. It also marks the beginning of the Hindu age of Kali (Kali Yuga), the fourth and final age of mankind, where the great values and noble ideas have crumbled, and man is heading toward the complete dissolution of right action, morality and virtue.