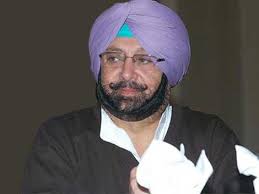 Earlier also, he served as the Chief Minister of Punjab from 2002 to 2007. He is also the the President of Punjab PCC. He is the titular Maharaja of Patiala.

He was also elected MP (Lok Sabha) from Amritsar constituency of Punjab in May 2014 General Elections, when he defeated his BJP rival, Mr. Arun Jaitley.

Captain Singh is a son of Maharaja Yadavindra Singh , former Maharaja of Patiala and his consort Mohinder Kaur. He attended the Welham Boys' School and Lawrence School Sanawar. His children include Yuvraj Raninder Singh and Jai Inder Kaur. His wife Preneet Kaur, has been an MP and served as Minister of State in the Ministry of External Affairs, Government of India, for the period 2009-2014.

Amarinder Singh was elected to the Lok Sabha on the ticket of the Indian National Congress in 1980. In 1984, he resigned from Parliament and from Congress as a protest against the Army entry in Darbar Sahib complex during Operation Bluestar. He became convenor of the Sikh Forum and then joined the Shiromani Akali Dal. He was elected to the State legislature and became Minister for Agriculture, Forests, Development and Panchayats.

Later, he broke away from the Shiromani Akali Dal and formed a splinter group named Shiromani Akali Dal (Panthic) which later merged with the Indian National Congress. He served as the President of Punjab Pradesh Congress Committee from 1999 to 2002 and became Chief Minister of Punjab from 2002 to 2007.

He was elected as the President of the Punjab Congress Committee for the second time in 2009.

He has also written books on war and Sikh history viz. A Ridge Too Far, Lest We Forget and the most recent being The Last Sunset; Rise and Fall of Lahore Durbar.

1.Though the Privy purses, special privileges like gun salute and the titles of the Princely states' rulers were abolished in 1970 by the Government of India yet the erstwhile rulers continue to use the titles nominally as past practice)