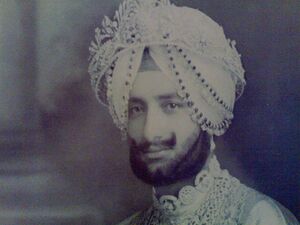 He served in the Patiala State Police and became its Inspector General.

He served in Malaya, Italy and Burma during the Second World War and for his services was awarded knighthood by the British government of the day.

He succeeded his father, Maharaja Bhupinder Singh, as the Maharaja of Patiala on 23 March 1938. But after initial hesitation agreed to the accession of the Patiala princely state into Indian Union on 5 May 1948. He was Rajpramukh of the new Indian state of Patiala and East Punjab States Union until it was merged with Punjab in 1956.

Following his accession to the throne of Patiala, Sir Yadavindra pursued a political and diplomatic career, serving as Chancellor of the Chamber of Princes from 1943-1944.

He was the Pro- Chancellor of Chamber of Princes in 1947. He, at a special session of the Chamber of the Princes, said: " After centuries, time has come when India has gained independence from foreign rule and it's the time when we all (princely states) should unite for our motherland " and persuaded many other rulers to join the Indian Union.

He continued his career from 1956 on wards serving as Indian delegate to the UN General Assembly from 1956–1957 and to UNESCO in 1958. He also headed the Indian delegation to the FAO several times during 1959-1969. Sir Yadavindra served as Indian Ambassador to Italy from 1965–1966 and as Indian Ambassador to the Netherlands from 1971 until 17 June 1974, when he died suddenly in office at The Hague from heart failure, aged 61. He was cremated with full state honours.

He was succeeded by his son Captain Amarinder Singh, who is a politician with the Congress Party and who has served as Chief Minister of the Indian State of Punjab from 2002 to 2007.His daughter, Maharajkumari Heminder Kaur is married to K. Natwar Singh, Former External Affairs Minister of India.

In 1956 His Highness donated the Anand Bhawan, a 150 bigha palace to the Govt. of Punjab (prior to creation of Himachal) for creation of Holiday Home for the poor children, which was later leased out by Himachal Pradesh Government to Baba Ramdev for his Pitanjali Trust.