Makkah or Mecca is a city in the Hejaz and the capital of Makkah Province in Saudi Arabia.

The city is located 70 km inland from Jeddah in a narrow valley.

As the birthplace of Muhammad and a site of Muhammad's first revelation of the Quran (the site in specificity being a cave 3.2 km from Mecca).

The ancient or early name for the site of Mecca is Bakkah (also transliterated Baca, Baka, Bakah, Bakka, Becca, Bekka, etc.).[1][2][3] An Arabic language word, its etymology, like that of Mecca, is obscure.[4] Widely believed to be a synonym for Mecca, it is said to be more specifically the early name for the valley located therein, while Muslim scholars generally use it to refer to the sacred area of the city that immediately surrounds and includes the Kaaba.[5]

The first mention of the city, under its old Arabic name Yathrib, dates to the 6th century BC. It appears in Assyrian texts (namely, the Nabonidus Chronicle) as Iatribu.[6] In the time of Ptolemy the oasis was known as Iatrippa.[7]

Into the older Arab town of Yathrib, Jews arrived in the 2nd century AD. There were three prominent Jewish tribes that inhabited the city into the 7th century AD: the Banu Qaynuqa, the Banu Qurayza, and Banu Nadir.[8] Ibn Khordadbeh later reported that during the Persian Empire's domination in Hejaz, the Banu Qurayza served as tax collectors for the shah.[9]

The situation changed after the arrival from Yemen of two new Arab tribes named Banu Aus (or Banu 'Aws) and Banu Khazraj. At first, these tribes were clients of the Jews, but later they revolted and became independent.[10] Toward the end of the 5th century, the Jews lost control of the city to Banu Aus and Banu Khazraj. The Jewish Encyclopedia states that they did so "by calling in outside assistance and treacherously massacring at a banquet the principal Jews", Banu Aus and Banu Khazraj finally gained the upper hand at Medina.[11]

Most modern historians accept the claim of the Muslim sources that after the revolt, the Jewish tribes became clients of the Aus and the Khazraj.[12] However, according to scholar of Islam William Montgomery Watt, the clientship of the Jewish tribes is not borne out by the historical accounts of the period prior to 627, and he maintained that the Jews retained a measure of political independence.[13]

Early Muslim chronicler Ibn Ishaq tells of a pre-Islamic conflict between the last Yemenite king of the Himyarite Kingdom[14] and the residents of Yathrib. When the king was passing by the oasis, the residents killed his son, and the Yemenite ruler threatened to exterminate the people and cut down the palms. According to Ibn Ishaq, he was stopped from doing so by two rabbis from the Banu Qurayza tribe, who implored the king to spare the oasis because it was the place "to which a prophet of the Quraysh would migrate in time to come, and it would be his home and resting-place." The Yemenite king thus did not destroy the town and converted to Judaism. He took the rabbis with him, and in Mecca, they reportedly recognized the Ka'ba as a temple built by Abraham and advised the king "to do what the people of Mecca did: to circumambulate the temple, to venerate and honour it, to shave his head and to behave with all humility until he had left its precincts." On approaching Yemen, tells ibn Ishaq, the rabbis demonstrated to the local people a miracle by coming out of a fire unscathed and the Yemenites accepted Judaism.[15]

Muhammad's arrival: In 622 AD/1 AH, Muhammad and around 70 Meccan Muhajirun believers left Mecca for sanctuary in Yathrib, an event that transformed the religious and political landscape of the city completely; the longstanding enmity between the Aus and Khazraj tribes was dampened as many of the two Arab tribes and some local Jews embraced Islam. Muhammad, linked to the Khazraj through his great-grandmother, was agreed on as civic leader. The Muslim converts native to Yathrib of whatever background—pagan Arab or Jewish—were called Ansar ("the Patrons" or "the Helpers").

According to Ibn Ishaq, the local pagan Arab tribes, the Muslim Muhajirun from Mecca, the local Muslims (Ansar), and the Jews of the area signed an agreement, the so-called Constitution of Medina, which committed all parties to mutual cooperation under the leadership of Muhammad. The nature of this document as recorded by Ibn Ishaq and transmitted by Ibn Hisham is the subject of dispute among modern Western historians, many of whom maintain that this "treaty" is possibly a collage of different agreements, oral rather than written, of different dates, and that it is not clear exactly when they were made. Other scholars, however, both Western and Muslim, argue that the text of the agreement—whether a single document originally or several—is possibly one of the oldest Islamic texts we possess.[16]

Prof. Zafarul Islam [17] writes that A very important and useful information that comes forth through the researches of Maulana Mubarakpuri is that the people of the Holy cities of Makkah and Madinah in the times of the Prophet (SAW) were not only familiar with the Indians, the Jats were also well-known to them. On the authority of Sirat-i-Ibn-i-Hisham, Maulana has stated

The Jats: Their Role and Contribution Vol. 2, End of p.27

that once some people came from Najran to Madinah. Looking at them Prophet (SAW) asked who are they? They are just like Indians.[18]

These Indians were assumed to be Jats (Zutt). In the same way, it is recorded in Jami-i-Tirmezi, the well-known collection of Hadith that the famous Sahabl Hazrat Abdullah lbn Masood (R.A.) once saw some persons in the company of the Prophet (SAW) in Makkah, he observed that their hair and body structure is just like the Jats.[19]

There are also some other references in the Arabic sources to the existence of the Jats in Madinah that period. They also included a physician (Tabib) who was once consulted during the illness of Hazrat Aisha (R. A.), the Holy Wife of the Prophet (SAW). [20] 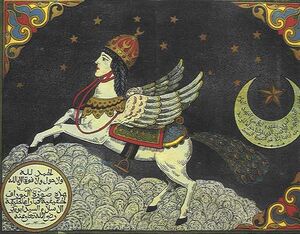 Buraq from a 17th-century Mughal miniature