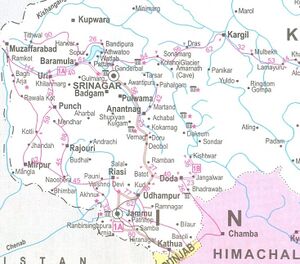 Location of Muzaffarabad in Jammu and Kashmir

Muzaffarabad is the capital of Azad Jammu and Kashmir, Pakistan.

It is located in Muzaffarabad District on the banks of the Jhelum and Neelum rivers. The district is bounded by Khyber-Pakhtunkhwa in the west, by the Kupwara and Baramulla districts of Disputed territory of Jammu & Kashmir in the east, and the Neelum District of Pakistan administered Azad Kashmir in the north.

Muzaffarabad is named after Sultan Muhammad Muzaffar Khan, the pioneer of the city of Muzaffarabad, who belonged to the Bamba Tribe.

The original name of Muzaffarabad was Udabhanda.[1]

Udabhanda was the capital of the Shahi dynasty. The Shahi (Devanagari शाही), also called Shahiya,[3][4] dynasties ruled portions of the Kabul Valley (in eastern Afghanistan) and the old province of Gandhara (northern Pakistan and Kashmir) from the decline of the Kushan Empire in third century to the early ninth century.[5] The kingdom was known as Kabul-shahan or Ratbel-shahan from (565 – 670 CE) when they had their capitals in Kapisa and Kabul, and later Udabhandapura (also known as Hund)[6] for its new capital.

The term Shahi is the title of the rulers, likely related to the Kushan form Shao[7] or Persian form Shah and refers to a series of 60 rulers probably descended from the Kushans or Turks (Turshkas).[8] They are split into two eras the Buddhist Turk-Shahis and the later Hindu-Shahis, with the changeover occurring sometime around 870. Later on the name of the town is recorded as Hindu Shikhri until the early to mid Mughal period and during the late Mughal period it was called by its present name Muzaffarabad.

Visited by Xuanzang in 631 AD

Alexander Cunningham[9] writes about Urasa - Between Taxila and Kashmir Hwen Thsang places the district of U-la-shi, or Urasa, which, from its position, may at once be identified with the Varsa Regio of Ptolemy, and with the modern district Rash, in Dhantawar, to the west of Muzafarabad. It is mentioned in the native chronicle of Kashmir[10] as a mountainous district in the vicinity of the valley, where Raja Sangkara Varmma received his death wound in A.D. 901. It corresponds exactly with the Pakhali of Abul Fazl, which included all the hilly country between the Indus and Kashmir, as far south as the boundary of Attak. At the present day the principal towns of the district are Mansera, in the north-east; Noshahra, in the middle ; and Kishangarh, or Haripur, in the south-west. In Hwen Thsang's time the capital is said to have been either 300 or 500 li, that is, 50 or 83 miles, distant from Taxila. This difference in the distance

[p.104]: makes it impossible to identify the actual position of the capital in the seventh century ; but it seems probable that it must have been at Mangali, which is said by the people to have been the ancient capital of the district. This place stands midway between Noshahra and Mansera, and about 50 miles to the north-east of Taxila.

According to Hwen Thsang, Urasa was 2000 li, or 333 miles, in circuit, which is probably correct, as its length from the source of the Kunihar river to the Gandgarh mountain is not less than 100 miles, and its breadth from the Indus to the Behat, or Jhelam, is 55 miles in its narrowest part. Its distance from Kashmir is stated at 1000 li, or 167 miles, which would place the capital somewhere in the neighbourhood of Noshahra, and within a few miles of Mangala, which was the ancient capital according to the traditions of the people.