Khor or Nanu Khod (नानू खोड़) is a village in Pataudi tahsil of district Gurgaon in Haryana. 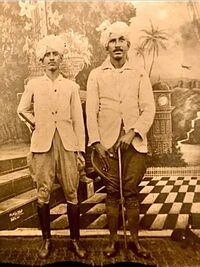 Captain Sis Ram Singh: He served as an officer of the Bharatpur Army in his younger days and got elected as MLA of Pataudi, Haryana.

Chaudhary Maluk Singh Thakran: He was a big landlord and moneylender with land in many villages. He was noted to be the wealthiest man between Delhi and Jaipur. His son namely, Chaudhary Pratap Singh Thakran was twice elected MLA from Gurgaon Vidhan Sabha and took oath as a cabinet minister in the Haryana Cabinet and also, presided over the house as Acting Speaker of the Vidhan Sabha in 1977.