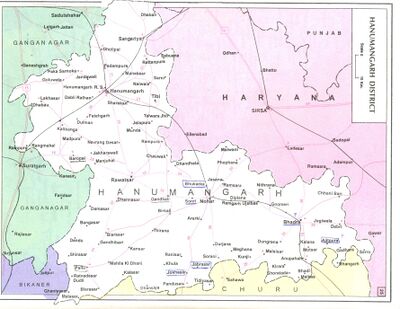 Location of Phephana in Hanumangarh district

Phephana (फेफाना ) or Fefana is a village in Nohar tahsil of Hanumangarh district of Rajasthan.

It is situated on Nohar - Sirsa Road about 21km from Nohar in northeast.

Phephana was founded in samvat 1876 (1819 AD) on falgun sudi 5 during the period of Bikaner Maharaja Surat Singh. With the motivation of Ratna Ram Brahman of Sidhmukh, Kewala Ram Bijarniya came from Nangal (Bhadra) and settled here. Prior to this there were 12 helmets or Bas which are now in ruined condition. [2]

The people of Phephana had played a very significant role in abolition of Jagirs and the freedom movement. To mention some such heroes namely, Ch. Pat Ram Punia, Ch. Likhma Ram Godara, Ch. Bahadur Singh, Shobha Ram , Ram Jas Mahla 'Bhajanopadeshak', Ganesh Ram Harijan, Kashi Ram Dhamu etc. Being the birth place of Ch Kumbha Ram Arya it was the centre of freedom movement. Arya Samaj acted as a catalyst for this movement. [3]

Phephana is one of the biggest villages with population of 17,000 (approximately).

It is a historic village to be known at least 300 years history. People say that there is 300 hundred year old Peepal (पीपळ) tree near a pond in village.

There are 2 government higher secondary schools in Phephana:

GSSS, Phephana is one of the oldest higher secondary school of Hanumangarh district. GSSS was upgraded to Senior Secondary School in 1959.

Students of different schools are serving the country in different fields. There are number of doctors, engineers, teachers, army personnel, industrialists, politicians, etc. are amongst the proud alumnus of the schools in the village.

In addition to it, there are two mosques in the village and a Gurudwara.