Rakhigarhi (राखीगढ़ी) (Rakhi Garhi) village is in Hisar district in Haryana. It is the site of a Pre-Indus Valley Civilisation settlement dating to as early as 4600 BCE.[1]

It is located in the Ghaggar-Hakra river plain,[2] some 27 km from the seasonal Ghaggar river. There are many other important archaeological sites in this area, in the old river valley to the east of the Ghaggar Plain. Among them are Kalibangan, Kunal, Balu, Bhirrana, and Banawali.[3]

According to Jane McIntosh, Rakhigarhi is located in the valley of the prehistoric Drishadvati River.[6] This is also known as Chautang River.[4]

Lohari Ragho is a smaller site nearby. 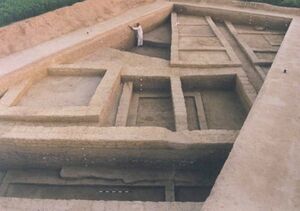 An excavated site at Rakhigarhi

In May 2012, the Global Heritage Fund, declared Rakhigarhi one of the 10 most endangered heritage sites in Asia. A study by the Sunday Times, found that the site is not being looked after, the iron boundary wall is broken, and villagers sell the artifacts they dig out of the site and parts of site now being encroached by private houses.[5][6]

The village is very ancient because archaeological finds testify an ancient habitation and settlement in the area connecting it to pre Aryan times.

In 1963 archaeologists discovered the village was the site of an extensive city, part of the Indus Valley Civilization. It is situated on dry bed of river Sarasvathi, which once flowed here and dried up by 2000 BC.[7][8]

Rakhigarhi is about to rewrite the 5000 year old history of our civilization. Recent excavations at Rakhigarhi in Hissar district of Haryana may push the history of the civilization back by over a thousand years. It could change the commonly held view about the Indus Valley civilization, as Rakhigarhi is situated on the bank of the now dry, Saraswati river. Archaeologists and historians are excited about the findings from Rakhigarhi, the largest Indus Valley site after Mohenjodaro. Archaeologists consider this to be no ordinary Harappan site and say it is the most important of all the archaeological sites of India. The unearthed clues may yield answers to many unanswered questions. Rakhigarhi findings have already started showing new civilization contours. The area and dimensions of the site are far wider than assessed by archaeologist Raymond and Bridget Allchin and J M Kenyer. It is 224 hectares, the largest in the country.[9]

In size, dimensions strategic location and unique significance of the settlement, Rakhi Garhi matches Harappa and Mohenjodaro at every level. Three layers of Early, Mature and Late phases of Indus Valley civilization have been found at Rakhi Garhi. What has so far been found indicates that Rakhi Garhi settlement witnessed all the three phases.[10]

The site has trick deposits of ‘Hakra Ware’ (typical of settlements dating back before the early phases of Indus Valley). ‘Early and ‘Mature’ Harappan artifacts. The solid presence of the Hakra Ware culture raises the important question: "Did the Indus civilization come later than it is recorded?" The Hakra and the Early phases are separated by more than 500-600 years and the Hakra people are considered to be the earliest Indus inhabitants. Although the carbon-14 dating results are awaited, based on the thick layers of Hakra Ware at Rakhi Garhi, it is said that the site may date back to about 2500 BC to 3000 BC. This pushes the Indus Valley civilization history by a thousand years or more. While this site came to light in 1963 excavations at Rakhigarhi started only in 1997.[11]

Had excavations started 70 years earlier, when Harappa and Mohenjodaro were uncovered, the story would have been different. Fossils indicate that the Harappan man reared cattle. The findings are startling. Rakhi Garhi was settled on the banks of a river Dhrishdwati, which was a tributary of the river Saraswati. Copper fishing hooks and woven nets found at the site affirms the river’s existence nearby. It is thought that the people living in this city traded with other people using this river for navigation.[12]

The site’s antiquities, drainage system and signs of small-scale industry are in continuity with other Indus sites. All this adds one more dimension to the whole debate on Indus civilization. Many feel that since this site is situated on the Saraswati river, it is more likely connected to the Vedic civilization. All this only add to the enigma called Indus civilization, rich in facts, richer still in speculation. What stands out from the churning debate is the fact that much more perhaps still remains shrouded in the folds of the past centuries. The real and very important part played by Haryana in India's history is yet to be fully understood.[13]

Digging so far reveals a well planned city with 1.92 m wide roads. Pits surrounded by walls have been found, which are thought to be sacrificial pits or for some religious ceremonies. Which shows fire was used extensively in their religious ceremonies. There are brick lined drains to handle sullage from the houses. Among other things that have been found are, terracotta statues, weights, bronze artifacts, combs, needles and terracotta seals. A bronze vessel has been found which is decorated with gold and silver. A gold foundry with about 3000 unpolished semi-precious stones has been found. Many tools used for polishing these stones and a furnace were found there. A burial site has been found with 11 skeletons with their heads in the north direction. Near the heads of these skeletons, utensils for everyday use are kept. The three female skeletons have shell bangles on their left wrists. Near one female skeleton, a gold armlet has been fond. In addition semi precious stones have been found lying near the head, showing that they were part of some sort of necklace.[14]

Article by Anubhuti Vishnoi in Economic Times, 6.9.2019[15] mentions the first study of the DNA samples of the skeletal remains excavated from Rakhigarhi, an Indus Valley Civilisation (IVC) site in Haryana, has found no traces of Iranian farmer or steppe pastoralist ancestry, which according to the lead archaeologist in the team raises doubt over the long-held theory of Aryan invasion or migration into South Asia.

“The paper indicates that there was no Aryan invasion and no Aryan migration and that all the developments right from the hunting-gathering stage to modern times in South Asia were done by indigenous people,” Prof Vasant Shinde, lead author of the paper, told ET.

The findings of the study, which took over three years to complete, authored by a team of Indian archaeologists and DNA experts from Harvard Medical School was published on Thursday in the scientific journal ‘Cell’ under the title: ‘An Ancient Harappan Genome Lacks Ancestry from Pastoralists and Iranian Farmers’. The paper concludes Indians came from a genetic pool predominantly belonging to an indigenous ancient civilisation. The findings are based on the study of the ancient genome in the skeletons excavated from a burial site at Rakhigarhi, which is among the biggest Indus Valley locations, spread across 300 hectares near Hisar. It belongs to the mature phase of the Harappan period, dating back to about 2800-2300 BC.

The paper makes three key points: The skeletal remains from the Rakhigarhi individual was from a population that is “the largest source of ancestry for South Asians”; the “Iranian related ancestry in South Asia split from Iranian plateau lineage over 12,000 years ago”; the “first farmers of the fertile crescents contributed little to no ancestry to later south Asians”.

The paper is authored by Vasant Shinde of Deccan College of Pune, Vageesh Narasimhan and David Reich of Harvard Medical School and Niraj Rai of the Birbal Sahni Institute of Palaeosciences among others. The paper claims Iranian genetic traits in the Indus Valley period and in present day South Asians come from ancient Iranian and South East Asian hunter-gatherers, much before the advent of large-scale farming. “The Iranian related ancestry in IVC derives from a lineage leading to early Iranian farmers, herders and hunter-gatherers before their ancestors separated, contradicting the hypothesis that the shared ancestry between early Iranians and South Asians reflects a large-scale spread of western Iranian farmers east. Instead, sampled ancient genomes from the Iranian plateau and IVC descend from different groups of hunter gatherers who began farming without being connected by substantial movement of people,” the paper states.

The study suggests farming skills have been developed indigenously contrary to prevalent theories that these came with migrants from the Steppes and Anatolian farmers. As the paper states: “(These findings) in South Asia as in Europe, the advent of farming was not mediated directly by descendants of the world’s first farmers who lived in the fertile crescent. Instead populations of hunter-gatherers — in Eastern Anatolia in the case of Europe and in a yet unsampled location in the case of South Asia — began farming without large-scale movement of people into these regions.”