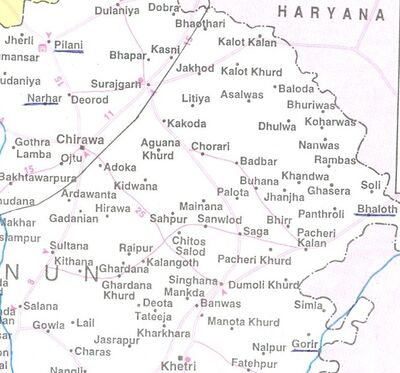 Location of Dhosi in Jhunjhunu district

Dhosi (ढोसी) is a village in Khetri tehsil of Jhunjhunu district in Rajasthan.

According to Thakur Deshraj, [1]about 1500 years ago a group of these people came from Ghazni and settled at place called 'Balavansa' near Delhi. Maan clan descended from Maan Singh. His son Bijal Singh came to 'Dhosi' village and settled here. The village Dhosi is surrounded by hills and situated near Narnaul in Haryana. Large number of people come to this place from far off places every year. Many temples and kunds have been constructed here. A fair is also organized at this place.

Prior to the Maan people came, Gandas gotra Jats were the rulers here. Bijal Singh was married to Gaurandevi, daughter of Nagal. He founded a village called 'Gorir' in the name of Gaurandevi at a distance of 3 km from Dhosi.[2]

Roopram Singh was the chieftain of this clan after 20 generations of Bijal Singh. At the time of Roopram Singh Shekhawats had occupied this province. Roopram Singh struggled for about 10 to 12 years in mid nineteenth century against Shekhawats of Khetri, but Maan people did not accept the rule of Shekhawats.[3]