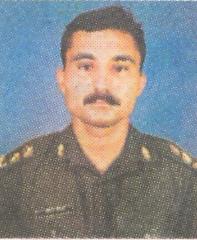 Lt. Ravinder Chhikara , of 6th Grenadiers, made supreme sacrifice for the country on 19 July 2000 in Rajori (Jammu and Kashmir) while fighting with terrorists. He was awarded Kirti Chakra (posthumous) for this act of bravery.

Lt. Ravinder Chhikara was born in village Kheri Asra, A small hamlet in Jhajjar district to Dr. Rattan Singh and Kamla Devi. He did his school from M.N.S.S. Rai

He joined N.D.A. He was Best Sportsman Of his course (93) in N.D.A. Again He was declared Best Sportsman of His course in I.M.A. He was commissioned in Indian Army on 12 december 1998 in 6th Grenadiers. In his brief career of one and half year, he was proud of his unit. He killed six terrorist before attaining martyrdom.

Displaying undaunting courage and valour of the highest order, Lt Ravinder Chhikara, 24, killed six dreaded terrorists of HUJI before attaining the supreme sacrifices in an encounter with foreign mercenaries near village Naili Kadoka in Manjakote area of Rajouri district on July 19, 2000.

The sacrifice given by this young officer who kept the traditions of Indian Army alive by laying down his life for this great nation will always be remembered. Hailing from village Kheri Asra a small hamlet in Jhajjar Haryana Lt. Chhikara showed most courage,selfless devotion to duty in keeping with the highest traditions of the Indian Army and with total disregard to personnel safety chased the dreaded HUJI militant group to their finish.

After receiving the information about the presence of few terrorists in village Naili a joint operation was launched by Ghatak PI under Lt Chhikara with troops of 16 Sikh on July 19. Seeing the advancing Ghatak Party, the terrorists opened volley of fire on the Party. Lt Chhikara who was moving closely behind the scouts quickly moved the house where from the fire had come.

Without wasting any time, under the cover of LMG fire the officer displaying utmost dedication to his duty sweeped into the room with a volley of bullets from his A K 47 Rifle and shot dead one terrorist who was in the process of firing his RPG. The terrorist was taken by surprise with the clever move of the Officer.

The bold action by this young officer turned the situation in favour of security forces. Seeing their accomplice dead two more terrorists who were also inside the house returned fire and ran towards the hill under the cover of a nallah. Not ready to let this fleeing opportunity to loose, Lt Ravinder Chhikara along with his team immediately chased the fleeing terrorists.

While chasing them he realised that his BPJ was hampering his impending task hence he threw it off and ran behind the terrorists like a roaring lion who were running up hill.

With the gap closing in , the fleeing terrorists suddenly took cover of a boulder and started firing at the party headed by Lt Chhikara. Showing utmost courage, selfless devotion to duty and with total disregard to personnel safety this brave Indian Army Officer jumped behind another boulder and killed the terrorist also. However, in the process he suffered the grievous multiple bullet injuries in his chest from the third terrorist.

This courageous officer was so entangled by the love of his mother land that despite the grievous wound he had suffered he entered into a hand to hand fight with the third terrorist and fired a long burst from his AK 47 Rifle killing him also before attaining martyrdom. 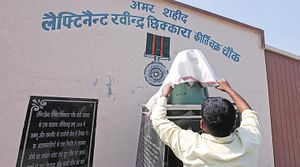 During this encounter a total of six foreign mercenaries including Jammu Region Area Commander of HUJI was also killed and huge quantity of arms and ammunition received.The raw courage and swiftness shown by this Army Officer prevented the terrorists from encircling the party from behind.This young officer while sacrificing his life for the nation took utmost care that no civilian should come in the cross firing in this deadly encounter and ensured their total safety before launching the offensive against the terrorists in the house they were hiding.

Besides being devoted to his duty this dynamic officer had developed a good rapport with the people of the area and was enjoying their good will.

Haryana Government has put a statue of Ravinder Chhikara at Jhajjar city at a square near Jahan-Aara bagh, near bus stand. This place is now called "Shaheed Chhikara Chowk".