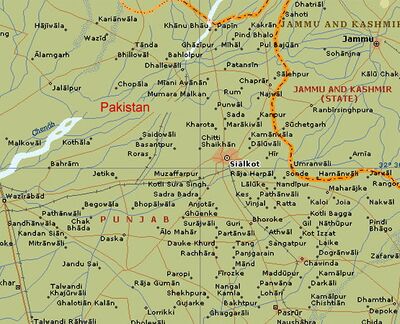 Its location was near the present Sialkot or Syalkot (स्यालकोट) city in Pakistan in the Punjab province.

Raja Gaj founded Ghazni. On Sunday, the 3d of Bysāk, the spring season (Vasant), the Rohini Nikhitra, and Samvat Dharmaraja (Yudhishthira) 3008 (=93 BC), Raja Gaj seated on the throne of Ghazni. Raja Gaj invaded Kashmir ; and married the daughter of its prince, by whom he had a son, called Salivahan. When this child had attained the age of twelve, tidings of another invasion came from Khorasan. Raja Gaj sent his family and kin, and on pretence of a pilgrimage to Jwalamukhi, with the prince Salivahan, to Punjab, where he fixed on a spot with abundance of water, and having collected his clansmen around him, he laid the foundation of a city which he named after himself, Salivahanpura (Salpura), on Sunday, the 8th of the month of Bhadoon of S. 72 (=16 AD). The surrounding Bhomias attended, and acknowledged his supremacy. Salivahan conquered the whole region of the Punjab.[1]

This would almost imply that Lahore and Salbahana were one and the same place but from what follows, the intervening distance could not have been great between the two cities. There is a Sangala, south of Lahore, near the altars of Alexander, and a Sialkote in our modern maps. Salbahana, Salbahanpoor, or simply Salpoora, may have been erected on the ruins of Kampilanagri. We may hope that researches in that yet untouched region, the Punjab, will afford much to the elucidation of ancient history. [2]

James Tod[3] writes that the tide of Yadu migration during the lapse of thirty centuries, traces them, from Indraprastha, Surapura, Mathura, Prayaga, Dwarica, Jadu Ka Dang (the mountains of Jud), Behera, Ghazni in Zabulistan ; and again refluent into India, at Salivahanpura or Salpura in the Punjab. Tannot, Derawal, Lodorva in the desert, and finally Jaisalmer, founded in S. 1212, or A.D. 1156.