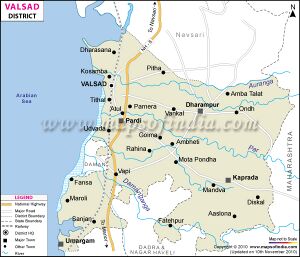 Sanjan (Hindi:संजन, Gujarati: સંજાણ) is a town in Umargam taluka of Valsad district of Gujarat, India. It is one of the earliest settlements of the Parsi people.[1]

Sanjan is approximately 17 kms from the town of Daman, which was a Portuguese colony and an important trading station until 1961. It is located 70 km from the city of Valsad.[2]

Sanjan is the location of the second railway station in Gujarat (the first station is on Umbergaon) on the Western railways (formerly the BB&CI Railways) just inside the Gujarat-Maharashtra border. Sanjan is in the Umargam taluka of Valsad district. Sanjan Bundar, the original settlement before the rail-head, is situated 2 km to the north of the railway station and is today a part of the extended town of Sanjan.

The river Varoli separates Sanjan from the nearby town of Umbergaon . The river's source comes from the Maharashtra Dam. But this river is very close to Sanjan and most of the religious part such as Ganpati Visharjan, etc is done by Sanjan people and near by people over this Varoli river. The Hindu festival of Mahashivratri is celebrated at the riverbank of Varoli in the Mahadev Temple.

Sanjan is believed to have been founded by Zoroastrian refugees who sought asylum in Gujarat in 698 AD. A widely believed legend is that the Zoroastrians were offered a filled pot of milk by Jadi Rana, the King of Sanjan to signify that his kingdom was full. In response, the Zoroastrians poured sugar into the milk without spilling any milk, stating they would adapt to the kingdom and cause no disorder, to which the King agreed.[3] Those Zoroastrians, whose descendants are today known as the Parsis, are thought to have named the settlement after Sanjan in Greater Khorasan, the city of their origin.[4] Although originally a Zoroastrian city, Sanjan was captured by Mahmud Begada of the Delhi Sultanate in the 1480s.[5]

Later, Sanjan became part of the Portuguese Northern Provinces until it was liberated by the Marathas under Chimnaji Appa in his campaign against the Portuguese (1733–39). In the 18th century, there was a huge influx of Spanish and French Muslim traders who had come to trade in Indian spices which was a hugely profitable market at the time. Many of these traders married Hindu Gujarati women who later converted to Islam; the current Muslim population of Sanjan are believed to descend from these people.

Modern Excavations: From 2002 to 2004, the World Zarathushti Cultural Foundation (WZCF) (Mumbai) and the Indian Archaeological Society(IAS) (New Delhi), conducted three seasons of archaeological excavations at the ancient mounds immediately North and East of Sanjan Bandar. The excavation Directors were (late) Dr S P Gupta of the IAS and Dr Kurush F Dalal. Three years (2002, 2003 & 2004) of excavations have revealed a large city (approx 2 km x 1 km) on the banks of the Varoli Creek/River which was occupied from the 8th to the 13th centuries AD. The houses were made of burnt brick and had solid stone foundations, they were equipped with sophisticated drainage in the form of adjacent Ringwells.

West Asian ceramics identified for the first time include Sassanian-Islamic Turquoise Glazed Ware, sgraffito ware, Kashan Lustre ware, Tin glazed ware and other associated wares like Celadon. Chinese wares like eggshell ware, Yeuh and Qingbai porcelains and glazed stoneware were also recovered though in smaller numbers.[2] The ceramics were studied and published by Dr. Rukshana Nanji. The published report is the first volume in the Sanjan Excavation Report Series. The glass was studied by Ms. Rhea Mitra-Dalal. Human remains were studied by Dr Veena Mushrif-Tripathi and published as the second volume in the series.

The site has also yielded the first definitive proof of Parsi (Zoroastrian) occupation at Sanjan in the form of a dokhma or Tower of Silence (a uniquely Zoroastrian mortuary structure). The excavations and explorations have also yielded interesting art historical data in the form of Hindu (Shilahara Period) sculptural and structural remains.[7]

Sabha Parva, Mahabharata/Book II Chapter 28 mentions Sahadeva's march towards south: kings and tribes defeated. Sanjayanti (संजयन्ती) is mentioned in Mahabharata (II.28.47).[10]....The son of Pandu (Sahadeva) also conquered the town of Sanjayanti and the country of the Pashandas and the Karahatakas by means of his messengers alone, and made all of them pay tributes to him.