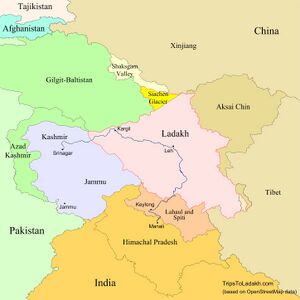 Ladakh and its neighbours 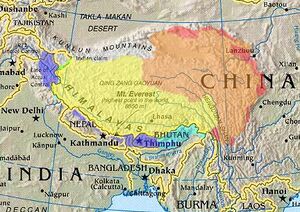 Tibet (तिब्बत) is a historical region covering much of the Tibetan Plateau in Central Asia.

Tibet is the highest region on Earth, with an average elevation of 4,900 metres. The highest elevation in Tibet is Mount Everest, Earth's highest mountain, rising 8,848 m above sea level.

Some scholars believe the first written reference to Bod "Tibet" was the ancient Bautai people recorded in the Egyptian Greek works Periplus of the Erythraean Sea (1st century CE) and Geographia (Ptolemy, 2nd century CE),[1] itself from the Sanskrit form Bhauṭṭa of the Indian geographical tradition.[2]

The modern Standard Chinese exonym for the ethnic Tibetan region is Zangqu (Chinese: 藏区; pinyin: Zàngqū), which derives by metonymy from the Tsang region around Shigatse plus the addition of a Chinese suffix, 区 qū, which means "area, district, region, ward". Tibetan people, language, and culture, regardless of where they are from, are referred to as Zang (Chinese: 藏; pinyin: Zàng) although the geographical term Xīzàng is often limited to the Tibet Autonomous Region. The term Xīzàng was coined during the Qing dynasty in the reign of the Jiaqing Emperor (1796–1820) through the addition of a prefix meaning "west" (西 xī) to Zang.

All of modern China, including Tibet, is considered a part of East Asia.[3] Historically, some European sources also considered parts of Tibet to lie in Central Asia. Tibet is west of the Central China plain, and within mainland China Tibet is regarded as part of 西部 (Xībù), a term usually translated by Chinese media as "the Western section", meaning "Western China".

Tibet is often called the "roof of the world, because it is a very high plateau. Tibetan Plateau and surrounding areas above 1600 m – topography.[4][5]

Tibet has some of the world's tallest mountains, with several of them making the top ten list. Mount Everest, located on the border with Nepal, is, at 8,848 metres , the highest mountain on earth.

Tibet has been called the "Water Tower" of Asia.

The Indus and Brahmaputra rivers originate from a lake (Tib: Tso Mapham) in Western Tibet, near Mount Kailash. The mountain is a holy pilgrimage site for both Hindus and Tibetans. The Hindus consider the mountain to be the abode of Lord Shiva. The Tibetan name for Mt. Kailash is Khang Rinpoche.

Cultural Tibet consists of several regions. These include Amdo (A mdo) in the northeast, which is administratively part of the provinces of Qinghai, Gansu and Sichuan. Kham (Khams) in the southeast encompasses parts of western Sichuan, northern Yunnan, southern Qinghai and the eastern part of the Tibet Autonomous Region. Ü-Tsang (dBus gTsang) (Ü in the center, Tsang in the center-west, and Ngari (mNga' ris) in the far west) covered the central and western portion of Tibet Autonomous Region.[68]

There are over 800 settlements in Tibet. Lhasa is Tibet's traditional capital and the capital of Tibet Autonomous Region. It contains two world heritage sites – the Potala Palace and Norbulingka, which were the residences of the Dalai Lama. Lhasa contains a number of significant temples and monasteries, including Jokhang and Ramoche Temple.

Shigatse is the second largest city in the Tibet AR, west of Lhasa. Gyantse and Qamdo are also amongst the largest.

Humans inhabited the Tibetan Plateau at least 21,000 years ago. This population was largely replaced around 3,000 BP by Neolithic immigrants from northern China, but there is a partial genetic continuity between the Paleolithic inhabitants and contemporary Tibetan populations.[7]

The earliest Tibetan historical texts identify the Zhang Zhung culture as a people who migrated from the Amdo region into what is now the region of Guge in western Tibet.[8] Zhang Zhung is considered to be the original home of the Bön religion.[9] By the 1st century BCE, a neighboring kingdom arose in the Yarlung valley, and the Yarlung king, Drigum Tsenpo, attempted to remove the influence of the Zhang Zhung by expelling the Zhang's Bön priests from Yarlung.[10] He was assassinated and Zhang Zhung continued its dominance of the region until it was annexed by Songtsen Gampo in the 7th century. Prior to Songtsen Gampo, the kings of Tibet were more mythological than factual, and there is insufficient evidence of their existence.[11]

Tibetan Empire: The history of a unified Tibet begins with the rule of Songtsen Gampo (604–650 CE), who united parts of the Yarlung River Valley and founded the Tibetan Empire. He also brought in many reforms, and Tibetan power spread rapidly, creating a large and powerful empire. It is traditionally considered that his first wife was the Princess of Nepal, Bhrikuti, and that she played a great role in the establishment of Buddhism in Tibet. In 640 he married Princess Wencheng, the niece of the powerful Chinese emperor Taizong of Tang China.[12]

Under the next few Tibetan kings, Buddhism became established as the state religion and Tibetan power increased even further over large areas of Central Asia, while major inroads were made into Chinese territory, even reaching the Tang's capital Chang'an (modern Xi'an) in late 763.[13] However, the Tibetan occupation of Chang'an only lasted for fifteen days, after which they were defeated by Tang and its ally, the Turkic Uyghur Khaganate.

The Kingdom of Nanzhao (in Yunnan and neighbouring regions) remained under Tibetan control from 750 to 794, when they turned on their Tibetan overlords and helped the Chinese inflict a serious defeat on the Tibetans.[14]

In 747, the hold of Tibet was loosened by the campaign of general Gao Xianzhi, who tried to re-open the direct communications between Central Asia and Kashmir. By 750, the Tibetans had lost almost all of their central Asian possessions to the Chinese. However, after Gao Xianzhi's defeat by the Arabs and Qarluqs at the Battle of Talas (751) and the subsequent civil war known as the An Lushan Rebellion (755), Chinese influence decreased rapidly and Tibetan influence resumed.

At its height in the 780's to 790's the Tibetan Empire reached its highest glory when it ruled and controlled a territory stretching from modern day Afghanistan, Bangladesh, Bhutan, Burma, China, India, Nepal, Pakistan, Kazakhstan, Kyrgyzstan, Tajikistan.

In 821/822 CE Tibet and China signed a peace treaty. A bilingual account of this treaty, including details of the borders between the two countries, is inscribed on a stone pillar which stands outside the okhang temple in Lhasa.[15] Tibet continued as a Central Asian empire until the mid-9th century, when a civil war over succession led to the collapse of imperial Tibet. The period that followed is known traditionally as the Era of Fragmentation, when political control over Tibet became divided between regional warlords and tribes with no dominant centralized authority. An Islamic invasion from Bengal took place in 1206.

Yuan dynasty: The Mongol Yuan dynasty, through the Bureau of Buddhist and Tibetan Affairs, or Xuanzheng Yuan, ruled Tibet through a top-level administrative department. One of the department's purposes was to select a dpon-chen ('great administrator'), usually appointed by the lama and confirmed by the Mongol emperor in Beijing. The Sakya lama retained a degree of autonomy, acting as the political authority of the region, while the dpon-chen held administrative and military power. Mongol rule of Tibet remained separate from the main provinces of China, but the region existed under the administration of the Yuan dynasty. If the Sakya lama ever came into conflict with the dpon-chen, the dpon-chen had the authority to send Chinese troops into the region.[16]

Tibet retained nominal power over religious and regional political affairs, while the Mongols managed a structural and administrative[17] rule over the region, reinforced by the rare military intervention. This existed as a "diarchic structure" under the Yuan emperor, with power primarily in favor of the Mongols.Mongolian prince Khuden gained temporal power in Tibet in the 1240s and sponsored Sakya Pandita, whose seat became the capital of Tibet. Drogön Chögyal Phagpa, Sakya Pandita's nephew became Imperial Preceptor of Kublai Khan, founder of the Yuan dynasty.

Vana Parva, Mahabharata/Book III Chapter 81 mentions names of Tirthas (Pilgrims). Trivishtapa (त्रिविष्टप) (Tirtha) is mentioned in Mahabharata (III.81.70).[23]....One should next proceed to the tirtha called Trivishtapa (त्रिविष्टप) (3.81.70) that is known over the three worlds. There in that tirtha is the sacred and sin-destroying river called Vaitarani (वैतरणी) (3.81.70). Bathing there and adoring the god known by the mark of the bull and holding the trident in his hand, one's soul being purified from every sin one attaineth to the highest state.