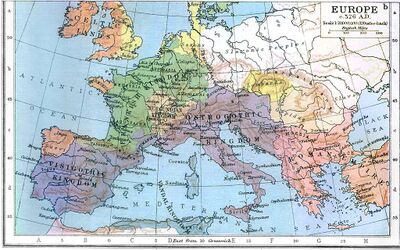 Visigoths ("western Goths") were branches of the nomadic tribes of Germanic peoples referred to collectively as the Goths.

In the 5th and 6th centuries Goths split into the Visigoths and the Ostrogoths. The term "Visigoth" was an invention of the 6th century. Cassiodorus, a Roman in the service of Theoderic the Great, invented the term "Visigothi" to match that of "Ostrogothi", terms he thought of as signifying "western Goths" and "eastern Goths" respectively.[1] Cassiodorus used the term "Goths" to refer only to the Ostrogoths, whom he served, and reserved the geographical term "Visigoths" for the Gallo-Spanish Goths.

Other names for other Gothic divisions abounded. A "Germanic" Byzantine or Italian author referred to one of the two peoples as the Valagothi, meaning "Roman Goths", and in 469 the Visigoths were called the "Alaric Goths".[2]

These tribes flourished and spread during the late Roman Empire in Late Antiquity, or the Migration Period. The Visigoths emerged from earlier Gothic groups (possibly the Thervingi)[3] who had invaded the Roman Empire beginning in 376 and had defeated the Romans at the Battle of Adrianople in 378. The Visigoths invaded Italy under Alaric I and sacked Rome in 410. After the Visigoths sacked Rome, they began settling down, first in southern Gaul and eventually in Spain and Portugal, where they founded the Kingdom of the Visigoths.

The Visigoths first settled in southern Gaul as foederati of the Romans - a relationship established in 418. However, they soon fell out with their Roman hosts and established their own kingdom with its capital at Toulouse. They next extended their authority into Hispania at the expense of the Suevi and Vandals. In 507, however, their rule in Gaul was ended by the Franks under Clovis I, who defeated them in the Battle of Vouillé. After that, the Visigoth kingdom was limited to Hispania, and they never again held territory north of the Pyrenees other than Septimania. A small, elite group of Visigoths came to dominate the governance of that region at the expense of those who had previously ruled there, particularly in the Byzantine province of Spania and the Suebic Kingdom of Galicia.

In or around 589, the Visigoths under Reccared I converted from Arianism to Nicene Christianity, gradually adopting the culture of their Hispano-Roman subjects.[4] Their legal code, the Liber iudiciorum (completed in 654) abolished the longstanding practice of applying different laws for Romans and Visigoths. Once legal distinctions were no longer being made between Romani and Gothi, they became known collectively as Hispani. In the century that followed, the region was dominated by the Councils of Toledo and the episcopacy (Little else is known about the Visigoths' history during the 7th century, since records are relatively sparse.) In 711 or 712, a force of invading Arabs and Berbers defeated the Visigoths in the Battle of Guadalete. Their king and many members of their governing elite were killed, and their kingdom rapidly collapsed. Gothic identity survived, however, especially in Marca Hispanica and the Kingdom of Asturias, which had been founded by the Visigothic nobleman Pelagius after his victory over the Moors at the Battle of Covadonga.

During their governance of the Kingdom of Hispania, the Visigoths built several churches that survive. They also left many artifacts, which have been discovered in increasing numbers by archaeologists in recent times. The Treasure of Guarrazar of votive crowns and crosses is the most spectacular. They founded the only new cities in western Europe from the fall of the Roman Empire until the rise of the Carolingians. Many Visigothic names and surnames are still in use in modern Spanish and Portuguese. Their most notable legacy, however, was the Visigothic code of law, the Liber iudiciorum, which served, among other things, as the basis for court procedure in most of Christian Iberia until the Late Middle Ages, centuries after the demise of the kingdom.

Jordanes,[5] who identified the Visigoth (Vesi) kings from Alaric I to Alaric II as the heirs of the 4th century Tervingian king Athanaric, and the Ostrogoth kings from Theoderic the Great to Theodahad as the heirs of the Greuthungi king Ermanaric. In addition, the Notitia Dignitatum equates the Vesi with the Tervingi in a reference to the years 388–391.[6]

The Goths remained in Dacia until 376, when one of their leaders, Fritigern, appealed to the Roman emperor Valens to be allowed to settle with his people on the south bank of the Danube. Here, they hoped to find refuge from the Huns. Valens permitted this, as he saw in them "a splendid recruiting ground for his army."[7] However, a famine broke out and Rome was unwilling to supply them with either the food they were promised or the land; open revolt ensued leading to 6 years of plundering and destruction throughout the Balkans, the death of a Roman Emperor and the destruction of an entire Roman army.

The Battle of Adrianople in 378 was the decisive moment of the war. The Roman forces were slaughtered and the Emperor Valens was killed during the fighting. Adrianople shocked the Roman world and eventually forced the Romans to negotiate with and settle the tribe within the empire's boundaries, a development with far reaching consequences for the eventual fall of Rome.

Reign of Alaric I

The new emperor, Theodosius I, made peace with the rebels, and this peace held essentially unbroken until Theodosius died in 395. In that year, the Visigoths' most famous king, Alaric I, took the throne, while Theodosius was succeeded by his incapable sons: Arcadius in the east and Honorius in the west.

Over the next 15 years, an uneasy peace was broken by occasional conflicts between Alaric and the powerful Germanic generals who commanded the Roman armies in the east and west, wielding the real power of the empire. Finally, after the western general Stilicho was executed by Honorius in 408 and the Roman legions massacred the families of 30,000 barbarian soldiers serving in the Roman army, Alaric declared war. After two defeats in Northern Italy and a siege of Rome ended by a negotiated pay-off, Alaric was cheated by another Roman faction. He resolved to cut the city off by capturing its port. On August 24, 410, however, Alaric's troops entered Rome through the Salarian Gate, to plunder its riches in the sack of Rome. While Rome was no longer the official capital of the Western Roman Empire (it had been moved to Ravenna for strategic reasons), its fall severely shook the empire's foundations.

The Visigothic Kingdom was a Western European power in the 5th to 7th centuries, created in Gaul when the Romans lost their control of the western half of their empire. In response to the invasion of Roman Hispania of 409 by the Vandals, Alans and Suevi, Honorius, the emperor in the West, enlisted the aid of the Visigoths to regain control of the territory. In 418, Honorius rewarded his Visigothic federates by giving them land in Gallia Aquitania on which to settle. The settlement formed the nucleus of the future Visigothic kingdom that would eventually expand across the Pyrenees and onto the Iberian peninsula.

The Visigoths' second great king, Euric, unified the various quarreling factions among the Visigoths and, in 475, forced the Roman government to grant them full independence. At his death, the Visigoths were the most powerful of the successor states to the Western Roman Empire.

The Visigoths also became the dominant power in the Iberian Peninsula, quickly crushing the Alans and forcing the Vandals into north Africa. By 500, the Visigothic Kingdom, centred at Toulouse, controlled Aquitania and Gallia Narbonensis and most of Hispania with the exception of the Suevic kingdom in the northwest and small areas controlled by the Basques and Cantabrians. However, in 507, the Franks under Clovis I defeated the Visigoths in the Vouillé and wrested control of Aquitaine. King Alaric II was killed in battle.

After Alaric's death, Visigothic nobles spirited his heir, the child-king Amalaric, first to Narbonne, which was the last Gothic outpost in Gaul, and further across the Pyrenees into Hispania. The center of Visigothic rule shifted first to Barcelona, then inland and south to Toledo. From 511 to 526, the Visigoths were ruled by Theoderic the Great of the Ostrogoths as de jure regent for the young Amalaric.

In 554, Granada and southernmost Hispania Baetica were lost to representatives of the Byzantine Empire (to form the province of Spania) who had been invited in to help settle a Visigothic dynastic struggle, but who stayed on, as a hoped-for spearhead to a "Reconquest" of the far west envisaged by emperor Justinian I.

The last Arian Visigothic king, Liuvigild, conquered most of the northern regions (Cantabria) in 574, the Suevic kingdom in 585, and regained part of the southern areas lost to the Byzantines, which King Suintila reconquered completely in 624. The kingdom survived until 711, when King Roderic (Rodrigo) was killed while opposing an invasion from the south by the Umayyad Muslims in the Battle of Guadalete on July 19. This marked the beginning of the Muslim conquest of Hispania in which most of the peninsula came under Islamic rule by 718.

A Visigothic nobleman, Pelayo, is credited with beginning the Christian Reconquista of Iberia in 718, when he defeated the Umayyads in battle and established the Kingdom of Asturias in the northern part of the peninsula. Other Visigoths who refused to adopt the Muslim faith or live under their rule, fled north to the kingdom of the Franks, and Visigoths played key roles in the empire of Charlemagne a few generations later. In the early years of the Emirate of Córdoba, a group of Visigoths who remained under Muslim dominance constituted the personal bodyguard of the Emir, the Al-Haras.[8]

During their long reign in Spain, the Visigoths were responsible for the only new cities founded in Western Europe between the 5th and 8th centuries. It is certain (through contemporary Spanish accounts) that they founded four: Reccopolis, Victoriacum (modern Vitoria-Gasteiz, though perhaps Iruña-Veleia), Luceo, and Olite. There is also a possible fifth city ascribed to them by a later Arabic source: Baiyara (perhaps modern Montoro). All of these cities were founded for military purposes and three of them in celebration of victory.

These kings were Arianist (followers of the theological teaching of Arius). They tended to succeed their fathers or close relatives on the throne and thus constitute a dynasty.

The Visigothic monarchy took on a completely elective character with the fall of the Balti, but the monarchy remained Arian until Reccared I converted in 587 (Hermenegild had also converted earlier). Only a few sons succeeded their fathers to the throne in this period.