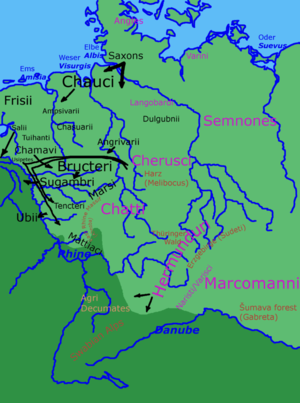 Suevi (सुएवी) or The Suebi were a large group of Germanic peoples who were first mentioned by Julius Caesar in connection with Ariovistus' campaign in Gaul, c. 58 BC.[1]

While Caesar treated them as one Germanic tribe, though the largest and most warlike, later authors such as Tacitus, Pliny and Strabo specified that the Suevi "do not, like the Chatti or Tencteri, constitute a single nation. They actually occupy more than half of Germany, and are divided into a number of distinct tribes under distinct names, though all generally are called Suebi".[2]

"At one time, classical ethnography had applied the name "Suebi" to so many Germanic tribes that it appeared as though in the first centuries A.D. this native name would replace the foreign name "Germans"."[3]

Classical authors noted that the Suebic tribes, compared to other Germanic tribes, were very mobile, and not reliant upon agriculture.[4]

James Todd[5] writes about the Suiones, Suevi, or Su that Now the Su, Yueh-chi, or Yuti, are Getes, according to De Guignes. Marco Polo calls Cashgar, where he was in the sixth century, the birthplace of the Swedes ; and De la Croix adds, that in 1691 Sparvenfeldt, the Swedish ambassador at Paris, told him he had read in Swedish chronicles that Cashgar was their country. When the Huns were chased from the north of China, the greater part retired into the southern countries adjoining Europe. The rest passed directly to the Oxus and Jaxartes ; thence they spread to the Caspian and Persian frontiers. In Mawaru-l-nahr (Transoxiana) they mixed with the Su, the Yueh-chi, or Getes, who were particularly powerful, and extended into Europe. One would be tempted to regard them as the ancestors of those Getes who were known in Europe. Some bands of Su might equally pass into the north of Europe, known as the Suevi. The meaning of Suevi is uncertain, but the word has no connexion with that of any Central Asian tribe.

Various Suebic groups moved from the direction of the Baltic Sea and river Elbe, becoming a periodic threat to the Roman empire on their Rhine and Danube frontiers. Toward the end of the empire, the Alamanni, also referred to as Suebi, first settled in the Agri Decumates and then crossed the Rhine and occupied Alsace.

A pocket remained in the region now still called Swabia, an area in southwest Germany whose modern name derives from the Suebi. Others moved as far as Gallaecia (modern Galicia, in Spain, and Northern Portugal) and established a Suebic Kingdom of Galicia there which lasted for 170 years until its integration into the Visigothic Kingdom.

Caesar placed the Suebi east of the Ubii apparently near modern Hesse, in the position where later writers mention the Chatti, and he distinguished them from their allies the Marcomanni. Some commentators believe that Caesar's Suebi were the later Chatti or possibly the Hermunduri, or even the Semnones.[6]

Later authors use the term Suebi more broadly, "to cover a large number of tribes in central Germany".[7] Although no classical authors explicitly call the Chatti Suevic, Pliny the Elder (23 AD – 79 AD), reported in his Natural History that the Hermiones were a large grouping of related Germanic gentes or "tribes" including not only the Suebi, but also the Hermunduri, Chatti and Cherusci.[8] Whether or not the Chatti were ever considered Suevi, both Tacitus and Strabo distinguish the two partly because the Chatti were more settled in one territory, whereas Suevi remained less settled.[9]

Strabo (64/63 BC – c. 24 AD), in Book IV (6.9) of his Geography also associates the Suebi with the Hercynian Forest and the south of Germania north of the Danube. He describes a chain of mountains north of the Danube that is like a lower extension of the Alps, possibly the Swabian Alps, and further east the Gabreta forest, possibly the modern Bohemian forest. In Book VII (1.3) Strabo specifically mentions as Suevic peoples the Marcomanni, who under King Marobodus had moved into the same Hercynian forest as the Coldui (possibly the Quadi), taking over an area called "Boihaemum". This king "took the rulership and acquired, in addition to the peoples aforementioned, the Lugii (a large tribe), the Zumi, the Butones, the Mugilones, the Sibini, and also the Semnones, a large tribe of the Suevi themselves". Some of these tribes were "inside the forest" and some "outside of it".[10] Tacitus confirms the name "Boiemum", saying it was a survival marking the old traditional population of the place, the Celtic Boii, though the population had changed.[11]

Tacitus describes a series of very powerful Suebian states in his own time, running along the north of the Danube which was the frontier with Rome, and stretching into the lands where the Elbe originates in the modern day Czech Republic. Going from west to east the first were the Hermunduri, living near the sources of the Elbe and stretching across the Danube into Roman Rhaetia.[12] Next came the Naristi, the Marcomanni, and then the Quadi. The Quadi are on the edge of greater Suebia, having the Sarmatians to the southeast.

The definitions of the greater ethnic groupings within Germania were apparently not always consistent and clear, especially in the case of mobile groups such as the Suevi. Whereas Tacitus reported three main kinds of German peoples, Hermiones, Istvaeones, and Ingvaeones, Pliny specifically adds two more genera or "kinds", the Bastarnae and the Vandili (Vandals). The Vandili were tribes east of the Elbe, including the well-known Silingi, Goths, and Burgundians, an area which Tacitus treated as Suebic. That the Vandals might be a separate type of Germanic people is a possibility Tacitus noted also, but for example the Varini are named as Vandilic by Pliny, and specifically Suebic by Tacitus.

Hukum Singh Panwar (Pauria)[13] considers Suevi to be the Shivi or Sibia Jat clans, who migrated from Sapta Sindhu. He has narrated as under that probably earliest migrants as leaders of these tribes were Shivi.

Just see the remarkable parallels between the functioning of the Germans and the Indian Jat tribal "Khaap" and "Sarvakhaap" panchayats. This further reminds us of the Vedic republican communities (the Panchajatah or Panchajna), who are considered by us as the common ancestors of the Indian Jats and the German Goths or Gots.

Before concluding, we may go into the question of identity of the Teutons and the Swedes. The Teutons were Aryans including High and low Germans and Scandanavians, and to be more specific Goths (Gots, Getae, Jats, Juts), Lombards (Lampaka or Lamba), Normans, Franks (Vrkas, Saxons (Sacae Getae) and Angles[14] The Suevis (Sivis) including the Vilka (Virkas), the Manns (Mans) the Schillers (Chhilller) (Within brackets are given the Indian names of the tribes) etc. who, as we shall note (infra), migrated from the Sapta Sindhu to the Scandanavian countries in ancient times, were known as

Svi Thjoth or Sui or (Suiones) Joth (Cf no. IX in the book), (Sivi or Sibi Jat), in archaic Norse, and ultimately as the Swedes.

Mr. B.S.Dahiya[15] has assiduously pin-pointed nearly 250 European communities whose names are identified by him with the surnames (gotras) of the Indian Jats. The Sivis were probably earliest migrants as leaders of these tribes. It is these tribes whose anthropological details are given above. In the light of the aforesaid evidence we can reasonably assert that the physical characteristics of the Sivisa (Suevis) and their descendents (the victims of Dasarajna wars, who managed, by hook or by crook, to remain in the Harappan region, cannot be different from those of ones who perforce left the country for good or were deported to their new home in the Scandanavian countries[16].

In the end, it will not be irrelevant to recall what Qanungo very aptly remarked: "In character the Jat resembles the old Anglo-Saxon and the ancient Roman, and has indeed more of the characteristics of the Teuton than of the Celt in him". In view of our investigations, we may well reverse the statement of Prof. Qanungo that the Teutons and others resemble the Jats - their ancestors - and not the other way round. Truly speaking, as and when in the past an upheaval, whether social, political or religious, took place in Sapta Sindhu , shock waves were sent to Central Asia and Middle East from this epicentre and its ripples were recorded as far away as the Baltic, Scandanavian, Netherlandic and American countries in the past, (infra). This is like Australia and the Americas experiencing similar social tremors from Europe in the recent past, and almost due to same kind of reasons. We have yet to see a Volkerwanderung of the Europeans to the Indian sub-continent in the sense in which the exodus of Indo-Aryans flooded Europe in the past. Our investigations pertaining to the historico-somatometrical details· and serological make-up of the Jats, as available from the present, medieval, classical and ancient Indian and foreign sources, in our view, conclusively establish that the Jats, like the descendents of other races, are the direct descendents of the Rig Vedic Aryan tribes whose officina gentium (cradle) was the Sapta-Saindhava country and whose names, in the course of the criss-cross of their migrations down the ages to various climes and countries, underwent recognizable alterations. They have indeed inherited not only their thoughts and sentiments but markedly their physical features also. We may cap all our observations with the final one: "Allah knows better".

The Jats:Their Origin, Antiquity and Migrations: End of p.160