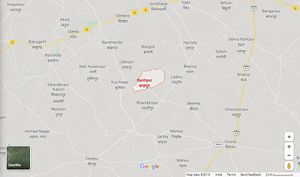 Location of Banhpur Villlage under Siana Tehsil in Bulandshahr District

It is situated near Kuchesar Fort. It comes under Siana Tehsil, dist- Bulandshahr (U.P.). The approximate population of the village is about 3500 as per 2011 census records. Mainly all farmers live in this village. Its pin code is 245402.

It belongs to Meerut Division. It is located 409 KM towards North from District head quarter Bulandshahr; and 9 KM from B B Nagar, 420 KM from Lucknoow. Hingbara ( 3.5 KM ), Takrarpur Ladpor ( 4.1 KM ) are the nearby Villages to Banhpur. Banhpur is surrounded by Simbhawali Block towards North, Syana Block towards East, Garh Mukteshwar Block towards North & Hapur Block is towards west.

Hapur, Pilkhuwa , Bulandshahr, Siana, BB Nagar, Gulaothi and Sikandrabad are the near by cities to Village Banhpur.

There was no development from the last many years in the village but now this situation has changed and a lot of development has been done. Maximum youth of this village are employed in government and private sectors.

Banhpur Village is a big and very old village and it is divided into many sections as we say mohallas in dehat.

Mohallas:- Banhpur Village is devided into Mohallas and they are given below:-

As per old stories, Banhpur Village was made initially by Pilania Jats who came from Pilani village of Rajasthan.

Main crops are sugarcane and wheat.

About Pilania Gotra: Thakur Nawal Singh founded the city of Nawalgarh in Jhunjhunu dist. of Rajasthan on 1794 at place called Rohili. Thukur Nawal Singh’s fourth son was Dalel Singh who was given the right of 12 villages after constructing a fort at present Pilani town. The fort was named Dalelgarh after Dalel Singh. When Dalel Singh was expanding his strength, Rao Raja Laxman Singh of Sikar attacked him. At that time Dalel Singh’s brother and ruler of Nawalgarh came to his rescue. In this war a brave Pilania Jat with his bravery could save the fort of Dalelgarh. After this the name Dalelgarh was changed to Pilani in the memory of Pilania Jat. In those days Pilani was divided into two hamlets situated on sand dunes. One was ‘Nehra bas’ occupied by Brahmans and other was ‘Pilania bas’ occupied by Jats and other castes.

Initially Pilani was a village of about 1500 people. Out of these 100 families were of Vaishyas, mainly of Agarwals. There were about 15 families of Maheshwaris out of which there was only one family of Birlas.

There was a king palace meana raja Ki Haveli in the centre of this village where King from UnchaGaon who was staying for some time and ruling on some villages. still there is a old building which is now almost destroyed.

After the famous revolt of 1857, The Fort Unchagaon was gifted by the British regime to the loyal jatzamindar of Moradabad, Raja Gursahai Singh.

On the death of Raja Gursahai Singh in 1898, his grandson Raja Karan Singh inherited the zamindari. He had no children & on his death in 1927, so he has adopted Kunwar Surendra Pal Singh S/o Sh. Jagat Singh Pilania from village banhpur who at that time was 10 yrs old. The fort was completely renovated in 1933 when he got married to the daughter of Maharaja Kishan Singh and Sister of Sh. Bachchu Singh of Bharatpur State in Rajasthan in 1933.

Unchagaon is also famous for Unchagaon Fort. This is a mud fort built during 1850s and belonged to Rajput Zamindars. Now it is owned by Raja Surendra Pal Singh, who inherited it at the age of 10. This palace was renovated by Surendra Pal Singh and now part of it is opened as a heritage resort/Hotel.

The imposing white facade of Fort is surrounded by well-manicured, lush verdant lawns. A section of the fort is still used by the Rajas as residence. Another part of the palace, The Court, used to be the main office of the Zamindars in the 18th century. Today, it has a conference hall and seven bedrooms that display the grandeur of the past. The living room is a mini museum, with imposing portraits of the ancestors, tiger skins and a rare collection of swords.

There are two Brave Jat soldiers monuments at village Banhpur who died during war in Indian Army.

1. There is one Govt school upto 5th class.

2. There is one Govt Girls school upto 5th class.

There is a Old Kutty Temple near Jagat Singh Inter college which is very famous.