Note - Please click → Birodi for details of similarly named villages at other places. 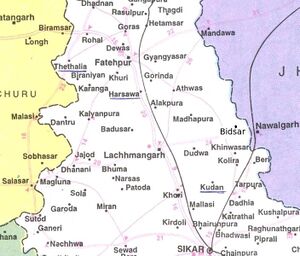 Location of Birodi in Sikar district 3 km west of Nawalgarh

Bidodi (बिड़ोदी) or Birodi or Beerodi is a village in Laxmangarh tehsil in Sikar district of Rajasthan state in India [1]. It is situated in the Eastern corner of Sikar district. Old name of the village was Swami ki Birodi. It is 250 years old village.

It is located at a distance of 18 km east of Laxmangarh. It is at a distance of 3 km from Nawalgarh. There are two Bidodi's: Bidodi chhoti (small) and Bidodi badi (large). The neighboring villages of Birodi include Khinwasar, Bidsar, Bidasar, Jhareva, Jogiyon Ka Bas, and Brahmino ki Dhani (Ramsinghpura). Birodi has recently been connected by asphalt road to Laxmangarh [2]. Ashphalt road to Nawalgarh is under consideration.

According to 2001 census, Birodi (both Chhoti and Badi Birodi included) had a population of about 4411 [4]people out of which 2000 people are Jats.

Major Jat gotra of the village is Bhaskar[5], Other Jat gotras are:

Other castes include Brahmin, and Harijan (956). Birodi Chhoti has a population of 1430.

After Indian independence the village was renamed as Chhoti Birodi because of its small area. Farmers of this village have their farms in other villages as well. The villagers are very progressive and they have instituted various revolutionary social reforms to keep up with times. In particular, they have

(1) Stopped post death ritual expenditure (kharach). Although, there is no basis for post death feast in any Hindu holy book; this superstitious tradition had become prevalent in some parts of India. Under this ceremony the family of the deceased would organize a feast on a certain day after the death to facilitate deceased entry into heaven. However, Brahmins swear for absolute need for the ceremony. Not surprisingly, the greatest beneficiaries were Brahmins who would corner the major portion of the offerings. Villagers have instituted a ban on this today. Instead, those who wish to spend money in remembrance of their family members are encouraged to donate money for common purpose.

(2) Dowry is generally discouraged. Although the practice has not stopped altogether, the villagers are in agreement to stop this tradition.

(3) No liquor shop in the village. This step was taken because a few villagers would spend all their money on liquor, while their families would go hungry. Initially any villager found drunk was fined, however this was not not found to be very successful as there were fights.

Eastern part of Chhoti Birodi is an unfertile area covered by sand dunes. South and west part of the village are comparatively fertile. Agriculture is dependent on monsoon. Presently, a lot of farms use boring wells for irrigation. The inhabitation's village covers an area of 500 acres.

70 percent (1000) of the village population is engaged in farming. There are 10 male government teachers, 5 female government teachers, 2 physical education (PTI) teachers, 2 nurses, 6 in armed forces, 2 in Delhi Police, 3 in RAC, 7 in state police, 4 in electricity department, 3 are retired (Subedar Major),5 are retired Havildars, 20 are working in Arabian countries, and 1 person works as a postman. In other words, only 70 villagers are gainfully employed in occupation other than agriculture.

There is unfinished stone road between Nawalgarh and Birodi Chhoti. It is connected by asphalt road to surrounding villages and to Laxmangarh.

The villagers claim to be fully literate. It is true that all the children go to school. However, many women are illiterate to this day. Many students aspire to get into engineering and medical schools besides other professions such as teaching, nursing, and defense forces. Jagdish Prasad Bhaskar is the pioneer of education in the village. He is the first post graduate in Hindi from village.

Society is solely governed by Hindu rituals. Young generation seems to be effected by western culture. Parda pratha (practice of using veils to cover face and other body parts) is discouraged.

Folk songs are sung by women during marriages and other social occasions. Menfolk sing dhamaal ( traditional Holi songs). Many villagers own TVs and Radios. One can hear sounds of popular Hindi music emanating from stereos and other devices during evenings and afternoons from different houses.

Most of the children play cricket. Some villagers also play volleyball and football.Every year of Republic day Village's oraganised the Football Tournament, major teams of Shekwati's participated in it. Villagers can be seen playing cards in chaupal (village common area).

As you would enter village by a road coming from Laxmangarh, you will find a shop selling essentials called Bhaskar Kirana Store. As you would travel along the road, you will see the village well supplying water to the village leading by an abandoned well. To the right side of the road is a common area donated by a Kulda Ram Bhaskar for Holi celebration. You will encounter a lot more houses and a few shops if you take left on the same road. To reach the village school though, you need to take a right from the abandoned well. This road to Laxmangarh leads to the Government Secondary School. The playground of village near the school. 1 Kms in North side The Jakhar's ki Jodi and the school is a famous place in village.

Quite a few of villagers have done notable works who may be mentioned here are: