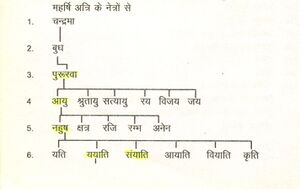 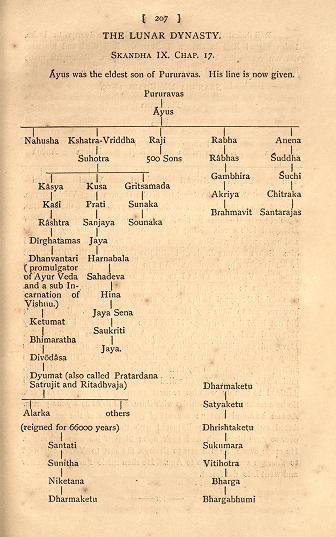 Pururava Ancestry as per Bhagavata Purana

Budha (बुध) was the son of Chandra and progenitor of the Chandravansh.

Budhwar Jat Gotra people are descendants of King Budha (बुध), the direct progenitor of the Chandravansh. [1]

According to Bhagavata Purana, Skandha IX Chapter 14, Chandravansh or Lunar races as under: Soma (चन्द्रमा) (the Moon) was born out of the eyes of Atri. He carried off Tara, the wife of Brihaspati (Jupiter). The Lunar dynasty originated in the union of Tārā, the female principle of Brihaspati (Jupiter), and the Moon. The issue was Budha (Mercury), the direct progenitor of the Lunar dynasty. The son of Budha was Pururavas. He married Urvasi, the renowned Deva nymph. Pururavas had six sons. (Ayu, Shratayu, Satyayu, Raya, Vijaya and Jaya)

James Todd[2] writes... The Yadu was the most illustrious of all the tribes of Ind, and became the patronymic of the descendants of Budha, progenitor of the Lunar (Indu) race. Yudhishthira and Baladeva, on the death of Krishna and their expulsion from Delhi and Dwaraka, the last stronghold of their power, retired by Multan across the Indus. The two first are abandoned by

[p.102]: tradition ; but the sons of Krishna, who accompanied them after an intermediate halt in the further Duab1 of the five rivers, eventually left the Indus behind, and passed into Zabulistan,2 founded Gajni, and peopled these countries even to Samarkand......

1 [The capital of Sambos was Sindimana, perhaps the modern Sihwan (Smith, EHI, 101).]