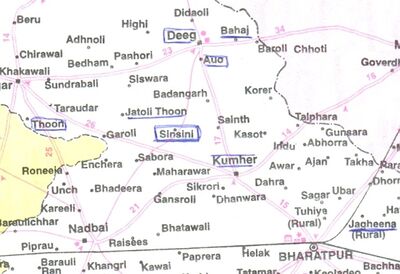 Location of Dahra is in southeast of Kumher in Bharatpur district

Dahra (दहरा/ डहरा) is a medium-size village in Kumher tahsil of Bharatpur district in Rajasthan. It is a village of Sinsinwars, who were closely related to the Royal family of Bharatpur i.e to Maharaja Suraj Mal.

It derives name from type of land called 'dahari'. It was founded in 1688 AD by Gopal Singh urf Raja Ram father of Tula Ram.

This was site of a fort of Sinsinwar rulers remains of which can still be seen. Thakur Tula Ram had a jagir of 60 villages. Vijay Ram was brother of Tula Ram. They had an important role in the formation of Jat Kingdom of Bharatpur. They took side of Churaman in struggle between Churaman and Badan Singh.[1]