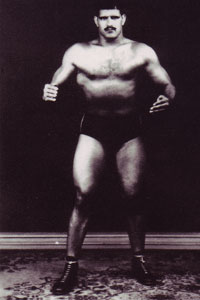 Dara Singh (दारा सिंह) (19 November 1928 – 12 July 2012) was a legendary wrestler and film actor from Punjab. He belonged to Randhawa Jat gotra. His Father's name was Soorata Singh. His home town is Dharmu Chak in the Punjab. He had been the President of All India Jat Mahasabha.He was a well-known wrestler before he started acting in Hindi films in 1962.

Dara Singh was a multi-timer World Heavyweight Wrestling Champion. He competed against some of the greatest names in wrestling history, including the great Stanislaus Zbyszko whom he defeated.

Dara Singh was known to have mastered the art of the Indian style of wrestling(Pehlwani) in the milked sand wrestling pits of India called AKHARAs. He was a favourite in the numerous legitimate wrestling tournaments in India. In addition to this, he also wrestled on invitation of the kings of various Indian princely states and wrestled frequently in "Haats"/"Melas(fairs/carnivals).

Upon reaching back to India, he gained unprecedented popularity when he played the role of Lord Hanuman in the television adaptation of the epic Ramayana. The series is amongst the most widely viewed in television serial history. The Commonwealth wrestling champion had entered the film industry in the fifties and is known for his roles in King Kong and Faulad. He was last seen in Imtiaz Ali's Jab We Met in which he played Kareena Kapoor's grandfather. There is also an old Black-and-White film in his own name - DARA SINGH, in which he himself played the role of Hero.

Dara Singh passed away on 12 July 2012 in a hospital at Mumbai, due to cardiac arrest. Passing away of this versatile personality has left a big void difficult to be filled in near future.

The short bio data is available at the following link of Rajya Sabha website: http://rajyasabha.nic.in/rsnew/pre_member/1952_2003/s.pdf