Shri Daria Singh Lohan,(b. 1 August 1956) is a Social Worker. He is a great donor and social worker committed to the cause of up liftment of education in Rajasthan. He has so far donated about Rs 2 Lakh from his savings to the Government Schools in his homeland. He can be contacted - 099280999551.

Birth, Childhood and his family

He was born in village Mahapalwas of district Jhunjhunu in Rajasthan on 1 August 1956 in a Hindu Jat family of Chaudhary Ishwar Singh Lohan. His mother's name is Bhateri Devi. The village Mahapalwas is situated 32 km East of Chirawa in district Jhunjhunu, Rajasthan. Daria Singh is Eldest of three sons of Chaudhary Ishwar Singh.

His family includes his wife Savitry Devi, two sons and two grand children - Ishaan (Child Model) & Shaan ( IRHR Record Holder - Youngest PAN Card Holder). Elder son Nishant Choudhary is a computer engineer as profession (He is also a Limca book of Record Holder)& younger one Vikas is preparing for RAS examinations. Elder son have married with a girl from Chirawa while youngest one is unmarried. 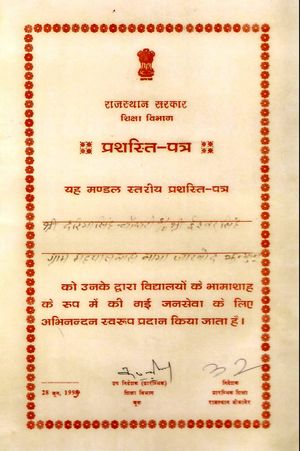 Comes out of a reputed and well-disposed family background; It is worth mentioning that Shri Daria Singh Lohan son of Shri Ishwar Singh of village Mahapalwas in Chirawa tehsil of Jhunjhunu District donated Rs 151000/- for the construction of a huge hall of 25 by 35 fts in the Government School at Mahapalwas. He is always keen in donating Scholarships at Schools every year since last 20 years to motivate the Students.

Back to The Donors