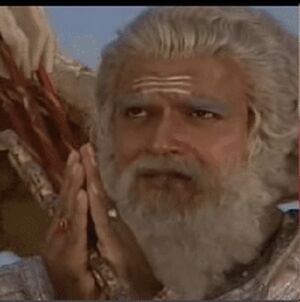 In the epic Mahabharata, Drona (Sanskrit/Hindi: द्रोण) or Dronacharya (द्रोणाचार्य) (or Guru Drona - गुरु द्रोण) was the Guru or teacher of the Kauravas and Pandavas. He was a Brahmin, the son of sage Bhardwaja and was a master of advanced military arts, including the divine weapons or Astras. Ashwatthama was the son of Drona while Arjuna was his favourite student.

Drona (द्रोण) is mentioned by Panini in Ashtadhyayi. [1]

For the sake of his wife and son, Drona desired freedom from poverty. Remembering a childhood promise given by King Drupada (his childhood friend), he decided to approach him to ask for help. However, King Drupada refused to even recognize their friendship. Drupada, said friendship, is possible only between persons of equal stature in life. As a child, he said, it was possible for him to have friends with Drona, because at that time they were equals. But now since Drupada had become a king, and Dronacharya remained a luckless indigent, friendship was impossible. However, he said he would satisfy Dronacharya if he asked for alms befitting a Brahmin, rather than claiming his right as a friend. Drona went away silently, but in his heart, he vowed revenge.

Drona later went to Hastinapura when Bhishma, with the permission of Dhritrashtra, appointed him Guru of the Kuru princes, training them in advanced military arts. Drona then established his Gurukula near the city, where princes from numerous kingdoms around the country came to study under him. This village came to be known as Guru-Grama ("guru" - teacher, "grama" - village), and has now developed into the city of Gurgaon.

There are many stories about Drona - his interaction with Eklavya and Karna, teaching his favourite disciple, Arjuna, war with Drupada along with his disciples leading to defeat of Drupada who vowed to avenge this defeat, Drona's role in battle with Abhimanyu etc.

On the 14th day of Kurukshetra War, Drona was slain by Dhrishtdyumna, son of Drupada and brother of Draupadi. Dhrishtdyumna was also the "Maharathi" or the chief commander of Pandavas during the war. This happened because Pandavas spread a rumour in the battlefield that Ashwatthama was killed by Bhima. Drona went to Yudhisthira to confirm the news. When Yudhisthira started speaking, not everything was heard in the noise and Drona thought that Ashwatthama was really killed. He abandoned all his arms and sat down in prayers when Dhristdyumna tore his head with his sword.

Guru Dronacharya remains a revered figure in history, and a pillar of the Indian tradition of respecting one's teacher as an equal not only of parents, but even of God.

The Government of India annually awards the Dronacharya Awards for excellence in sports, to the best sports teachers and coaches in India.