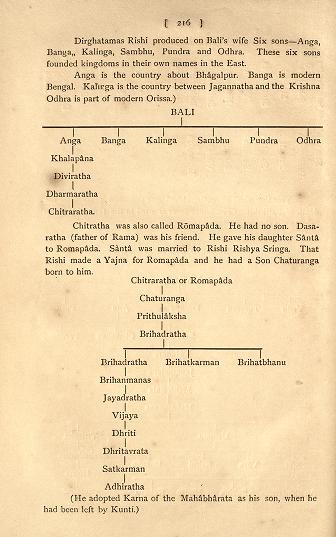 Ancestry of Bali as per Bhagavata Purana 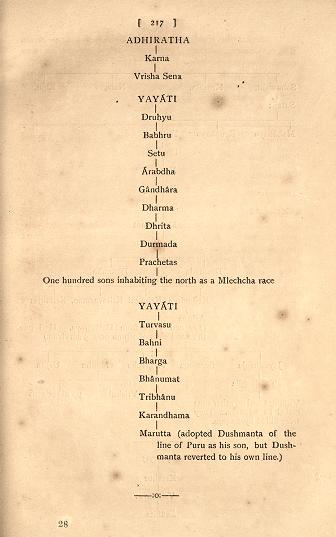 Karna (कर्ण) was son of Kunti. Dhillons are called the descendants of Karna [1], the famed royal warrior mentioned in the great Hindu epic, the Mahabharata and he was also the eldest son of Queen Kunti.

Srimad Bhgavatam tells us that While playing on the bank of the Ganges, Adhiratha found a baby wrapped up in a basket. The baby had been left by Kunti because he was born before she was married. Because Adhiratha had no sons, he raised this baby as his own. This son was later known as Karna. (SB9.23.13)

Bali was a king in line of Anu son of Yayati as under:

Chitratha was also called Romapada. He had no son. Dasaratha (father of Rama) was his friend. He gave his daughter Santa to Romapada. Santa was married to Rishi Rishya Sringa. That Rishi made a Yajna for Romapada and he had a Son Chaturanga born to him.

(He adopted Karna of the Mahabharata as his son, when he had been left by Kunti.)

Vrishasena was son of Karna. He was a warrior on the Kaurava side, slain by Arjuna.

Karna's son Vrishasena is described as a chief of the Angas (6,17)

There was a King Karna in the Bhin-baroliya gotra too. Most Dhillons today trace their history back to Prince Dhillon[3], the first Dhillon, the grandson of Karna and great grandson of Queen Kunti.

According to the family tree of Dhillons of Amritsar, Prince Dhillon was the grandson of Mahabharat famed Karna and son of Loh Sen [4]. Karna the famed warrior mentioned in the great Hindu epic, the Mahabharata. Karna was killed at Kurukshetra. After Karna was killed at the Battle of Kurukshetra, his descendants first went to Rajasthan and then to Bhatinda in present-day Punjab. Even now, Dhillons are settled in large numbers in the areas of Bhatinda. They are also settled in the area of Moga, Sangrur, Ropar, Patiala and abroad.

Karnal city in Haryana is said to have been founded by the Kauravas at around the time of the Mahabharata epic for the king Karna.

Vaisampayana continued, "Then, O bull among the Bharatas, that mighty bowman, Karna, surrounded by a large army, besieged the beautiful city of Drupada (Drupadapura) (द्रुपदपुर) (3-255-1b). And he, after a hard conflict, brought the hero under subjection, and, O best of monarchs, made Drupada contribute silver and gold and gems, and also pay tribute.

And, O foremost of kings, having subdued him, (Karna) brought under subjection those princes that were under him (Drupada) and made them pay tribute. Then going to the north, he subdued the sovereigns (of that quarter) and having effected the defeat of Bhagadatta (भगदत्त) (3-255-4b) , Radha's son ascended that mighty mountain Himavat (हिमवन्त) (3-255-5a), all along fighting his foes. And ranging all sides, he conquered and brought under subjection all the kings inhabiting the Himavat (3-255-6a), and made them pay dues.

Then going to the south, Karna vanquished the mighty charioteers (of that quarter) and in Dakshinatya (दाक्षिणात्य) (3-255-11c), the Suta's son entered into conflict with Rukmi (रुक्मी) (3-255-12a). After having fought dreadfully, Rukmi spake to the Suta's son saying, 'O foremost of monarchs, I have been pleased with thy might and prowess. I shall not do thee wrong: I have only fulfilled the vow of a Kshatriya. Gladly will I give thee as many gold coins as thou desirest.'

Then going to Shishupala's (शैशुपाल) (3-255-16a) son , the son of the Suta defeated him and that highly powerful one also brought under his sway all the neighbouring rulers. And, O bull of the Bharata race, having subjugated the Avantis (3-255-17a) and concluded peace with them, and having met with the Vrishnis (वृष्णि) (3-255-17b ), he conquered the west.

That lord of men, Dhritarashtra's son, accompanied by his father and brothers and friends, came to that mighty bowman, who had arrived, and duly paid homage unto Karna crowned with martial [p. 503]: merit. And the king proclaimed his feats, saying, 'What I have not received from either Bhishma, or Drona, or Kripa, or Vahlika, I have received from thee. May good betide thee! What need of speaking at length! Hear my words, O Karna! In thee, O chief of men, I have my refuge. O mighty-armed one. O tiger among men, without doubt all the Pandavas and the other kings crowned with prosperity, come not to a sixteenth part of thee. Do thou, O mighty bowman, O Karna, see Dhritarashtra, and the illustrious Gandhari, as the bearer of the thunderbolt did Aditi.'

"Then, O king, there arose in the city of Hastinapura (Nagasahvaya) (3-255-29b) a clamour, and sounds of Oh! and Alas! and, O lord of men, some of the kings praised him (Karna), while others censured him, while others, again, remained silent. Having thus, O foremost of monarchs, in a short time conquered this earth furnished with mountains and forests and skies, and with oceans, and fields, and filled with high and low tracts, and cities, and replete also with islands. O lord of earth, and brought the monarchs under subjection,--and having gained imperishable wealth, the Suta's son appeared before the king. Then, O represser of foes, entering into the interior of the palace that hero saw Dhritarashtra with Gandhari, O tiger among men, that one conversant with morality took hold of his feet even like a son. And Dhritarashtra embraced him affectionately, and then dismissed him. Ever since that time, O monarch, O Bharata, king Duryodhana and Sakuni, the son of Subala, thought that Pritha's sons had already been defeated in battle by Karna."

Having thus conquered and brought under his subjection the world, the mighty charioteer and tiger among men came (back) to Hastinapura (Nagasahvaya) (नागसाह्वय) (3-255-22b).