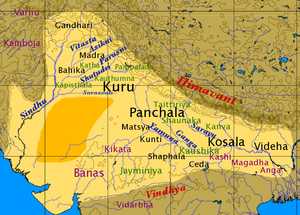 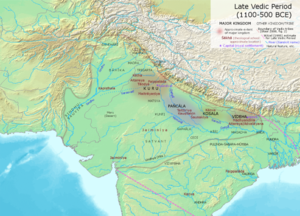 Kunti (कुंति) is the mother of the eldest three of the Pandava brothers Yudhisthira, Bhima, Arjuna.

Her father was Śũrasena of the Yadu clan, and she was named Pritha (Pŗtha). She was thus the sister of Vasudeva, father of Krishna. She was given in adoption to the childless King Kuntibhoja, after which she became known as Kunti. After her arrival, King Kuntibhoja was blessed with children. He considered Pritha his lucky charm and took care of her until her marriage.

Later on, Kunti married Prince Pandu of Hastinapura. He took a second wife Madri, but was unable to father children. Grief-stricken, he left for the forest with his wives, to live in self-imposed exile. Then, Kunti revealed her secret mantra. She used it three times, first receiving a son, Yudishtira, from the god Yama, then Bhima from the god Vayu, and thirdly Arjuna, from the god Indra. Kunti revealed the mantra to Madri, who bore twin sons, Nakula and Sahadeva, from the twin gods the Asvins. The five together are known as the Pandavas.

After the death of Pandu and Madri, Kunti was left to tend for all five sons. After the great battle and in her old age, she goes in exile to the forest, with her brothers-in-law Dhritarashtra and his wife Gandhari. They die together in a forest fire.

Kunti (कुन्ती) is mentioned by Panini in Ashtadhyayi. [1]

Kunti (कुंति) is mentioned by Panini in Ashtadhyayi. [2]

V. S. Agrawala[4] writes that Ashtadhyayi of Panini mentions janapada Kunti (कुंति) (IV.1.170) - Mahabharata speaks of Kunti as the region through which flowed the Ashva Nadi (Vanaparva, 308.7) a tributary of Chambal. Kunti is identified with Kontwar through which flows Kumari River.

The descendants of kunti are known as Kaunteya or Kuntal, which is a Jat gotra.[5] The Jat clans originated from Kunti are: