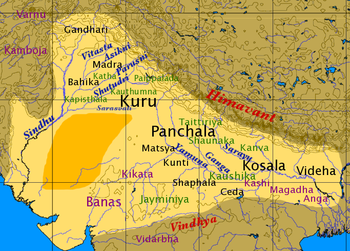 Jangala (जाङ्गल) were ancient people of the Mahabharata period. In the epic times (final centuries BC), the region between the triangle of Thaneshwar, Hissar and Hastinapur was distinguished by three different names:

Adi Parva, Mahabharata/Mahabharata Book I Chapter 94 tells us the History of Puru and of the Pandavas.

"Samvarana begat upon his wife, Tapati, the daughter of Surya, a son named Kuru. This Kuru was exceedingly virtuous, and therefore, he was installed on the throne by his people. It is after his name that the field called Kuru Jangala has become so famous in the world."

Udyoga Parva/Mahabharata Book V Chapter 53 mentions The country of the Kurus, including the region called Jangala as the paternal kingdom of Pandavas. Thou hast, however, obtained the whole earth by those heroes. Won by the strength of their arms, the sons of Pritha made over thee this extensive empire.

Alas, that (Vahika) maiden of large proportions, dressed in thin blankets, is thinking of me,--her Vahika lover--that is now passing his days in Kurujangala, (VIII.30.19)

This clan is named as Jāngala in the Vayu Purana, alongwith Bodhas and Bhadhrakars. [2] Matsya Purana says that the river Indus flowed through the country of Jāngalas. Mahabharata also mentions them. [3]