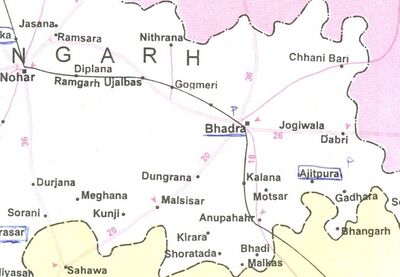 Location of Kalana in Hanumangarh district

Kalana (कलाना) is a village in Bhadra tahsil in Hanumangarh district in Rajasthan founded by Beniwal Jats.

Kalana was founded by Ch. Kala Ram Beniwal in 1782.

It was founded by Ch. Kala Ram Beniwal in 1782 and was given to his daughter who was married in Kaswan family in nearby village Bidlai at a distance of 3 km. Ch. Kala Ram Beniwal left the village and moved to Punjab. Beniwals tried to resettle in this village many times but could not succeed as their population started going down. The Kaswan Jats from Bidlai village settled here. The numberdars of the village had been from Kaswan, Nehra, Dahiya, Bhambu and Rao Jat gotras.