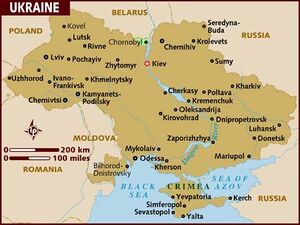 Location of Kiev in Ukraine

Kiev or Kyiv (Hindi:कीव, Ukrainian: Київ; Russian: Киев) is the capital of Ukraine.

It is located in the north central part of the country on the Dnieper River.

The city's name is said to derive from the name of Kyi.

The city probably existed as a commercial centre as early as the 5th century. A Slavic settlement on the great trade route between Scandinavia and Constantinople, Kiev was a tributary of the Khazars,[1] until seized by the Varangians (Vikings) in the mid-9th century. Under Varangian rule, the city became a capital of the Kievan Rus', the first East Slavic state. Completely destroyed during the Mongol invasion in 1240, the city lost most of its influence for the centuries to come. It was a provincial capital of marginal importance in the outskirts of the territories controlled by its powerful neighbours; first the Grand Duchy of Lithuania, followed by Poland and Russia.[2]

It is believed that Kiev was founded in the late 9th century (some historians have wrongly referred to as 482 AD).[3] The origin of the city is obscured by legends, one of which tells about a founding-family consisting of a Slavic tribe leader Kyi, the eldest, his brothers Shchek and Khoryv, and also their sister Lybid, who founded the city (The Primary Chronicle). According to it the name Kyiv/Kiev means to "belong to Kyi". Some claim to find reference to the city in Ptolemy’s work as the Metropolity (the 2nd century).[4] Another legend states that Saint Andrew passed through the area and where he erected a cross, a church was built. Also since the Middle Ages an image of the Saint Michael represented the city as well as the duchy.

The Primary Chronicle (a main source of information about the early history of the area) mentions Slavic Kievans telling Askold and Dir that they live without a local ruler and pay a tribute to the Khazars in an event attributed to the 9th century. At least during the 8th and 9th centuries Kiev functioned as an outpost of the Khazar empire.

A hill-fortress, called Sambat (Old Turkic for "High Place") was built to defend the area. At some point during the late 9th or early 10th century Kiev fell under the rule of Varangians (see Askold and Dir, and Oleg of Novgorod) and became the nucleus of the Rus' polity. The date given for Oleg's conquest of the town in the Primary Chronicle is 882. Other historians suggest that the Magyar tribes ruled the city between 840 and 878, before migrating with some Khazar tribes to Hungary. According to these the building of the fortress of Kiev was finished in 840 by the lead of Keő (Keve), Csák and Geréb, the three brothers, possibly members of the Tarján tribe (the three names are mentioned in the Kiev Chronicle as Kyi, Shchek and Khoryv, none of them are Slavic names and it has been always a hard problem to solve their meaning/origin by Russian historians. Though the three names were put into the Kiev Chronicle in the 12th century and they were identified as old-Russian mythological heroes).[5]

During the 8th and 9th centuries, Kiev was an outpost of the Khazar empire. However, being located on the historical trade route from the Varangians to the Greeks and starting in the late 9th century or early 10th century, Kiev was ruled by the Varangian nobility and became the nucleus of the Rus' polity, whose 'Golden Age' (11th to early 12th centuries) has from the 19th century become referred to as Kievan Rus'. In 968, the nomadic Pechenegs attacked and then besieged the city.

During 1169, Grand Prince Andrey Bogolyubsky sacked Kiev taking many pieces of religious artwork including the Mother of God icon.[6] In 1203 Kiev was captured and burned by Prince Rurik Rostislavich and his Kipchak allies.

In the 1230s the city was besieged and ravaged by different Rus' princes several times.

In 1240 the Mongol invasion of Rus' led by Batu Khan completely destroyed Kiev,[7] an event that had a profound effect on the future of the city and the East Slavic civilization. At the time of the Mongol destruction, Kiev was reputed as one of the largest cities in the world, with a population exceeding 100,000 in the beginning of the early 12th century.

In the early 1320s, a Lithuanian army led by Gediminas defeated a Slavic army led by Stanislav of Kiev at the Battle on the Irpen' River, and conquered the city. The Tatars, who also claimed Kiev, retaliated in 1324–1325, so while Kiev was ruled by a Lithuanian prince, it had to pay a tribute to the Golden Horde. Finally, as a result of the Battle of Blue Waters in 1362, Kiev and surrounding areas were incorporated into the Grand Duchy of Lithuania by Algirdas, Grand Duke of Lithuania.[36] In 1482, the Crimean Tatars sacked and burned much of Kiev.[8]

In 1569 (Union of Lublin), when the Polish–Lithuanian Commonwealth was established, the Lithuanian-controlled lands of the Kiev region, Podolia, Volhynia, and Podlachia, were transferred from the Grand Duchy of Lithuania to the Crown of the Kingdom of Poland, and Kiev became the capital of Kiev Voivodeship.[9]

In 1658 (Treaty of Hadiach), Kiev was supposed to become the capital of the Duchy of Rus' within the Polish–Lithuanian–Ruthenian Commonwealth,[10] but the treaty was never ratified to this extent. Kept by the Russian troops since 1654 (Treaty of Pereyaslav), it became a part of the Tsardom of Russia from 1667 on (Truce of Andrusovo) and enjoyed a degree of autonomy. None of the Polish-Russian treaties concerning Kiev have ever been ratified.[11]

In the Russian Empire Kiev was a primary Christian centre, attracting pilgrims, and the cradle of many of the empire's most important religious figures, but until the 19th century the city's commercial importance remained marginal.

Hukum Singh Panwar (Pauria)[12] writes that The Russian archaeologists discovered innumerable graves of the Saka Kings and chieftains in the Kuban, north of the Caucasus (7th-6th century B.C.), in the Crimea, in south Russia, in the Taman peninsula, in the Dnieper Valley as far up as Kiev, as well as in the Don, Donetz and Volga basins as far westwards as the Urals, in the Dunube basin as far west as Hungary and in what used to be East Prussia and is now Western Poland (6th-5th century B.C.)107. Excavations of the Royal Scythian tombs by M.P. Gryazhnov, S.I. Rudenko and others at Pazyryk and other sites in the Western Altai and nearer to lake Baikal (6th-4th century B.C. contemporary of Herodotus's Royal Scythians of South Russia) were most interesting and informative[13].