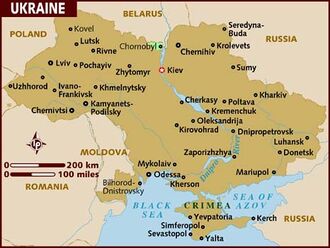 Crimea (क्रीमिया) is a peninsula of Ukraine located on the northern coast of the Black Sea with the Autonomous Republic of Crimea occupying most of the peninsula.

The name Crimea takes its origin in the name of a city of Qırım (today's Stary Krym) which served as a capital of the Crimean province of the Golden Horde. Qırım is Crimean Tatar for "my hill" (qır – hill, -ım – my). Russian Krym is a Russified form of Qırım. The ancient Greeks called Crimea Tauris (later Taurica, Ταυρική in Ancient Greek), after its inhabitants, the Tauri. The Greek historian Herodotus mentions that Heracles plowed that land using a huge ox ("Taurus"), hence the name of the land. Herodotus also refers to a nearby region called "cremni or 'the Cliffs'" which may also refer to the Crimean peninsula, notable for its cliffs along what is otherwise a flat northern coastline of the Black Sea.

Originating in semi-legendary Scandza, believed to be somewhere in modern Götaland, Sweden, a Goth population had crossed the Baltic Sea before the 2nd century AD, reaching Scythia at the coast of the Black Sea in modern Ukraine where Goths left their archaeological traces in the Chernyakhov culture. In the 5th and 6th centuries, they became divided as the Visigoths and the Ostrogoths, and established powerful successor-states of the Roman Empire in the Iberian Peninsula and Italy.[1] Crimean Gothic communities appear to have survived intact until the late 18th century.[2]

The territory of Crimea was conquered and controlled many times throughout its history by various forces. The Cimmerians, Greeks, Scythians, Goths, Huns, Bulgars, Khazars, the state of Kievan Rus', Byzantine Greeks, Kipchaks, Ottoman Turks, Golden Horde Tatars and the Mongols all controlled Crimea in its earlier history.

In the 13th century, it was partly controlled by the Venetians and by the Genovese; they were followed by the Crimean Khanate and the Ottoman Empire in the 15th to 18th centuries, the Russian Empire in the 18th to 20th centuries, Germany during World War II and the Russian Soviet Federative Socialist Republic and later the Ukrainian Soviet Socialist Republic, within the Soviet Union during the rest of the 20th century.

Taurica was the name of Crimea in antiquity. Taurica was inhabited by a variety of peoples. The inland regions were inhabited by Scythians and the mountainous south coast by the Taures, an offshoot of the Cimmerians. Greek settlers inhabited a number of colonies along the coast of the peninsula, notably the city of Chersonesos in modern Sevastopol. In the 2nd century BCE the eastern part of Taurica became part of the Bosporan Kingdom, before being incorporated into the Roman Empire in the 1st century BC. During the 1st, 2nd and 3rd centuries CE, Taurica was host to Roman legions[3], and colonists in Charax, Crimea. Taurica was eventually renamed by the Crimean Tatars, from whose language Crimea's modern name derives. The word "Crimea" comes from the Crimean Tatar name Qırım, via Greek Krimea (Κριμαία).

Throughout the later centuries, Crimea was invaded or occupied successively by the Goths (AD 250), the Huns (376), the Bulgars (4th–8th century), the Khazars (8th century), the state of Kievan Rus' (10th–11th centuries), the Byzantine Empire (1016), the Kipchaks (Kumans) (1050), and the Mongols (1237). In the 13th century, the Republic of Genoa seized the settlements which their rivals, the Venetians, had built along the Crimean coast and gained control of the Crimean economy and the Black Sea commerce for two centuries.

Crimea became part of Russia's Taurida Governorate and was the site of much of the fighting in the Crimean War (1853–1856), which devastated much of the economic and social infrastructure of the peninsula.

I. Sara wrote: "Recent excavations in the Ukraine and Crimea. The finds points to the visible links of the Jat and Scythians."[5]

Esther Jacobson[6] notes: "The most western of the Early Nomads' relatives and those most familiar to the modern observer were Scythians. They are believed to have arrived in the lands of the Caucasus, the Crimea, and the rich steppe north of the Black Sea by the sixth century B.C.... In the late years of the first millennium B.C., the successors to the Early Nomads and Sakas served as the vehicles for the transformation of Eurasian nomadism into statehood. The Xiongnu of Mongolia gathered an array of nomadic peoples together into a confederation which became the major geopolitical opponent of the Chinese Han Dynasty. In the same period, the second and first centuries B.C., the Yuezhi established hegemony over the vital steppe region west of the borders of Han China and extending through Bactria to the borders of India. Indeed, after their conversion to Buddhism, the Yuezhi- by then known as the Kushans- proceeded to conquer India and to establish the great Kushan Dynasty...."

Hukum Singh Panwar (Pauria)[7] writes that The Russian archaeologists discovered innumerable graves of the Saka Kings and chieftains in the Kuban, north of the Caucasus (7th-6th century B.C.), in the Crimea, in south Russia, in the Taman peninsula, in the Dnieper Valley as far up as Kiev, as well as in the Don, Donetz and Volga basins as far westwards as the Urals, in the Dunube basin as far west as Hungary and in what used to be East Prussia and is now Western Poland (6th-5th century B.C.)107. Excavations of the Royal Scythian tombs by M.P. Gryazhnov, S.I. Rudenko and others at Pazyryk and other sites in the Western Altai and nearer to lake Baikal (6th-4th century B.C. contemporary of Herodotus's Royal Scythians of South Russia) were most interesting and informative[8].