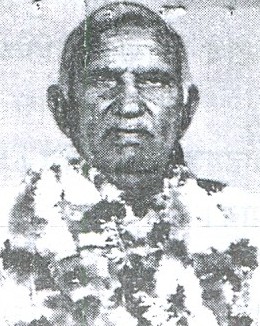 His father was Ch. Ramjas Arya (Mothsara) and mother Smt Sundar Devi. His mother died when he was 2 years old. His father was an army man.

He passed 4th class. He joined Chaudhary Kumbha Ram Arya and Ch. Hanuman Singh Budania during the freedom movement. He moved from village village to awaken the people. He struggled with the jagirdar of Bain (बांय)). He participated in procession against the arrest of Swami Karma Nand. He was a strong follower of Arya Samaj.

After Independence he was elected as tahsil sarpanch in the first panchayat election.

In 1961 he was elected pradhan of Taranagar Panchayat samiti. He was also Chairman of Central Cooperative Bank.

In 1977 he defeated Chandan Mal Vaid and got elected as MLA from Taranagar constituency.

As pradhan of Panchayat samit he did commendable service for the spread of education. His work of building kunds in rural area of desert was appreciated. His contribution to the welfare of farmers is remembered by the people.

Back to The Freedom Fighters/Freedom fighters from Churu district