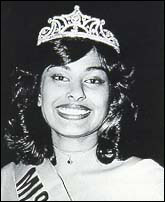 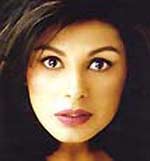 Pamella Bordes (born Pamela Singh Chaudhary c. 1961 in Haryana in India and later marrying Henri Bordes), briefly hit the headlines in the United Kingdom in 1988 and 1989. She was born in a Hindu Jat family of Kadiyan gotra in Dubaldhan village in District Rohtak, Haryana. Pamela Singh Choudhary was the daughter of an army officer, Major Mahinder Singh Kadiyan, who was killed in the Indo-China War. She received her education in Maharani Gayatri Devi School where she had her first brush with controversy in Class X.

A former Miss India, she had been known in society columns as a social companion of then Sunday Times Editor Andrew Neil and of Junior Minister Colin Moynihan. It was then discovered that she had a House of Commons Security Pass arranged by MPs David Shaw and Henry Bellingham. The Evening Standard published allegations that she was associated with a Libyan security official Ahmed Gadaffi Al Daim, raising issues similar to the Profumo affair.

For a while, every minute of her day was documented by the media - each detail of hers was lapped up eagerly, by waiting TV cameras...she made waves around the world and for all the wrong reasons!!

This was in the late 80's, when she was linked with a British Member of Parliament, a leading Tory MP, and when the incident exploded into a sex-scandal of preposterous proportions. Pamela is reported to have said that her story if told in full, could bring down the Government of UK. That was the period when a newspaper anywhere in the world carried her picture and snide remarks to go with it! She was a swinging socialite with a growing reputation for unpleasant things - so much so, her own mother denounced her publicly!

The "right touch" got her into the right places and Pamela confidently strode the length and breadth of the House of Commons with a Commons security pass to work as a research assistant for the Dover MP, David Shaw with the help of fellow Tory MP, Henry Bellingham.

From her hunting ground in UK where the femme fatale claimed yet another victim in Carlos Moynihan, the UK sports minister, Bordes swung further to connect with revolutionary Libyan leader Colonel Gadaffi's closest aides, Ahmed Gadaff Al Daim jetsetting often to the Libyan capital, Tripoli in a private jet.

With Daim by her side, Paris was not too far where the duo wined and dined at the most luxurious and expensive hotels.

Soon her social circle included arms dealer Adnan Khashoggi and the Emir of Qatar. It was during one of her tours to Paris, she met her boyfriend, Henri Bordes, later to become her husband. Bordes was a convicted arms dealer. The couple later split.

Unable to stomach all this after a while, Pamela went into hibernation - deep and long.

When she emerged, it was as Pamela Singh - the professional photographer. Today, she is better known as a photographer, more sober and with greater substance to her character.

She went on to win the Miss India title which is her most memorable moment!

"...when I won the Miss India crown! Bizarre as it may sound, it was so unexpected that I was just stunned! There were so many other girls who were far taller, more beautiful and more elegant!"…

She describes her wild days in her own words, thus: “Sometimes I made really bad decisions, trusted people who let me down. I can do without hassles in my life. I'm not going to turn round and say, 'Oh, every experience enriched me', or any such cliché. I honestly wish I hadn't met certain people. The accident with the press was horrible…”

All this could have made a normal person insane. What makes her unique is her strength and tenacity.

In spite of all these mistakes and humiliation, she didn’t lose her will to live. She moved on - out of the dark shadows into a better life!

Back to The Artists